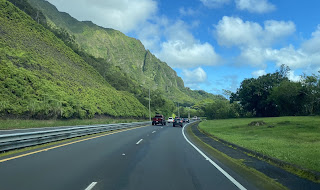 An intro the highway networks of Oahu and Maui

Prior to the Statehood the first signed highways within Hawaii Territory came into existence during World War II.   During World War II the territory of Hawaii saw an influx of military activity following the attack on Pearl Harbor on December 7, 1941.  Numerous Military Routes and early Hawaii Routes were signed through the Hawaiian Territory to aid military personnel in navigating the islands.  Military Highways were assigned US Route style shields whereas lesser highways were assigned an early variation of what is now the Hawaii Route Spade. 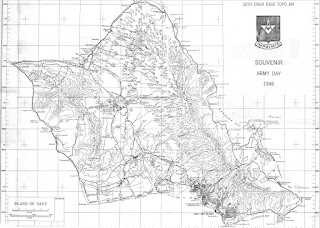 The initial 1955 Hawaii Route network on Oahu and Maui can be viewed on the 1959 Gousha Road Map of Hawaii. 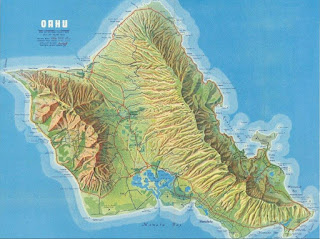 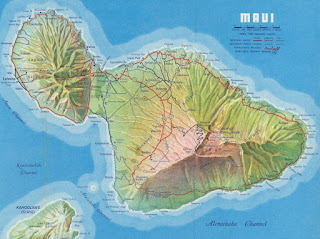 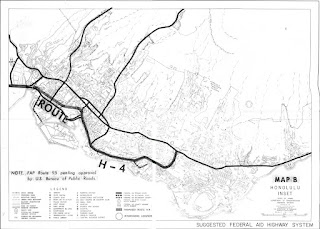 The corridor of Interstate H-3 was the most contentious of the constructed Interstates on Oahu and would open to traffic across the Koolau Range on December 12, 1997.

The Roads of Oahu (Just Passing Through #10)

By Challenger Tom
This past week I decided to take a small scale road trip on California State Route 190 from CA 99 east to the unbuilt section over the Sierra Nevada Range.  While I was in for what turned out to be a fun drive following the course of the Tule River watershed what I found researching the back story of CA 190 was one of the most complex and unusual stories of any California State Highway.  Given that I had a ton of older photos of the eastern segment of CA 190 in the Mojave Desert of Inyo County I thought it was time to put something together for the entire route. The simplified story of CA 190 is that it is a 231 mile state highway that has a 43 mile unbuilt gap in the Sierra Nevada Range.  CA 190 is an east/west State Highway running from CA 99 in Tulare County at Tipton east to CA 127 located in Death Valley Junction near the Nevada State Line in rural Inyo County.  The routing CA 190 was adopted into the State Highway system as Legislative Route 127 which was adopted in 1933 acc
3 comments
Read more

By Challenger Tom
While completing California State Route 89 between Lassen Volcanic National Park and US Route I took a detour in Truckee up the infamous Donner Pass Road. Generally I don't dispense with the history of a roadway before the route photos but the history of Donner Pass is steeped within California lore and western migration.  The first recorded Wagon Crossing of Donner Pass was back in 1844.  The infamous Donner Party saga occurred in the winter of 1846-47 in which only 48 of the 87 party members survived.  Although the Donner Party incident is largely attributed to poor planning and ill conceived Hastings Cutoff it largely led to the infamous reputation of Donner Pass. The first true road over the Sierra Nevada Range via the Donner Pass was known as the Dutch Flat & Donner Lake Road.  The Dutch Flat & Donner Lake Wagon Road was completed by 1864 to assist with construction of the Central Pacific build the First Trans-Continental Railroad over Donner Pass.  The websit
Post a Comment
Read more