Paper Highways; US Route 6 to San Francisco via Tioga Pass 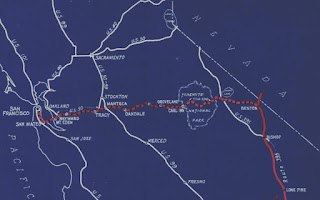 Below CA 120 eastbound can be seen descending from Tioga Pass through Lee Vining Canyon towards Mono Lake. 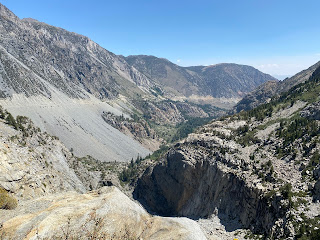 Tioga Pass first obtained noteworthiness when a mining expedition discovered silver at the Sheepherder Mine on Tioga Ridge during 1860.  The 1860 discovery of silver was not initially exploited and the finding largely fell into obscurity.  The Sheepherder silver claim was rediscovered in 1875 (1874 according to the Division of Highways) by William Brusky Jr.  Brusky wasn't able to obtain a sizeable piece of ore to bring to an assay until 1877.  Claims at Tioga Ridge were formally organized in 1878 which led to the establishment of the Tioga Mining District.  By 1880 the mining community of Dana at the site of the Great Sierra Mine had become large enough to warrant Post Office Service.  By 1881 the Great Sierra Consolidated Silver Company ("Great Sierra Company") bought out all the mining claims on Tioga Ridge.

Tioga Pass can be seen as "McLanes Pass" on the 1868 California Geological Survey Map of the Sierra Nevada Mountains near the vicinity of Yosemite Valley. 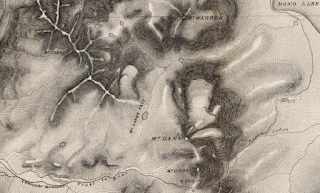 The mines at Tioga Ridge were initially accessible by way of trails through Lundy Canyon and Bloody Pass.  The "Great Sierra Wagon Road" was proposed by the Great Sierra Company which had an estimated cost of $17,000 dollars in 1881 to construct a road from the Big Oak Flat Road near Crane Flat east to the Tioga Peak mines.  In 1882 the Great Sierra Company authorized a survey for a wagon road and railroad to the mines of Tioga Ridge which was completed by August during said year.  In July of 1882 the California & Yosemite Short Line Railroad was incorporated with the intended goal of also building a rail line to the Tioga Mining District.

The Tioga Pass Road can be seen ending at the Tioga Mining District on the 1906 Norris Peters Map of Yosemite National Park.  A trail over Mono Pass can be seen southeast of Tioga Pass. 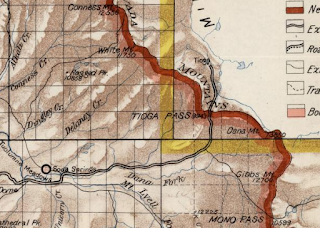 In 1899 what would become Legislative Route 40 ("LRN 40") was added to the State Highway System.  The original definition of what became LRN 40 according to CAhighways.org called for:

The Department of Public Works first considered building the eastern extension of the Tioga Road to Mono Basin first via an established pack trail over Bloody Pass.  By 1902 a new route via Lee Vining Canyon had been selected and construction began.  The September 1950 California Highways & Public Works cites that by 1910 construction through Lee Vining Canyon to the Tioga Mine had yet been completed to State standards.  A later Division of Highways article cites that LRN 40 east of Tioga Pass was completed during 1910. 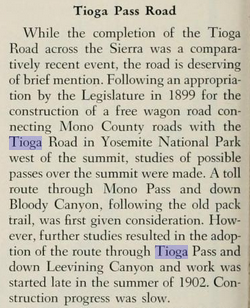 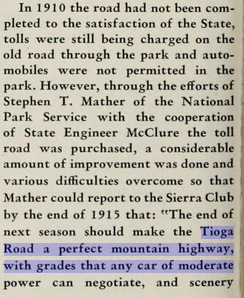 In 1911 the Federal Government brought a lawsuit against the franchise holders of the Great Sierra Wagon (referred to as the "Old Tioga Road").  The Federal suit argued that the Tioga Road had been long abandoned and sought to condemn the franchise rights so it could be incorporated as a Park Road.  Ultimately the law suit found that the owners of the Tioga Road had maintained it enough that their claims to ownership were valid.

The completed Tioga Pass Road can be seen in detail on the 1914 USGS Map of Yosemite National Park. 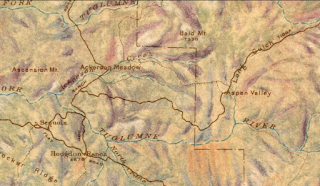 Much of the above early history of the Tioga Pass Road within Yosemite National Park was cited from Yosemite.ca article on Tioga Pass.

Yosemite.ca on the Tioga Pass Road

According to CAhighways.org in 1915 Legislative Chapter 306 and 396 changed the definition of LRN 40 to include all of the segments Tioga Pass Road and Big Oak Flat Road which were not in within the boundary of Yosemite National Park:

"that portion of the Great Sierra Wagon Road, better known as the Tioga Road, lying without the boundary of Yosemite National Park, providing that the portion within the park is taken over by the federal government." Chapter 396 added "that certain toll road in Tuolumne and Mariposa counties known as the Big Oak Flat and Yosemite Toll Road beginning at a point near the former location of Jack Bell Sawmill in Tuolumne Cty and extending thence in an E-ly direction through a portion of Mariposa Cty at Hamilton Station, thence again into Tuolumne Cty, past the Hearden Ranch, Crocker Station, Crane Flat, and Gin Flat to the boundary line of the original Yosemite Grant near Cascade Creek"

More on LRN 40 can be found on CAhighways.org: 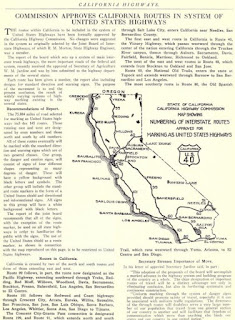 The initial run of Sign State Routes were announced in the August 1934 California Highways and Public Works.  CA 120 was announced as a new Sign State Route originating at US 99/LRN 4 in Manteca.  CA 120 as originally defined followed LRN 66 east to Oakdale, LRN 13 east to Yosemite Junction near Chinese Camp, LRN 40 to the Yosemite National Park boundary, the Tioga Pass Road through Yosemite National Park and LRN 40 via Mono Mills to CA 168 at Benton near the Nevada State Line. 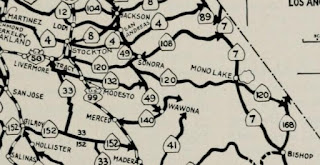 As noted in the intro a June 1935 sketch map from the Division of Highways shows US 6 with two proposed alignments in California.  The first alignment shows US 6 entering California via CA 168 near Benton.  US 6 is shown terminating to the south at Long Beach by way of Owens Valley and Los Angeles.  The Benton-Long Beach proposed alignment of US 6 was a violation of it's even numbering which was intended to denote a US Route with a cardinal east/west orientation. 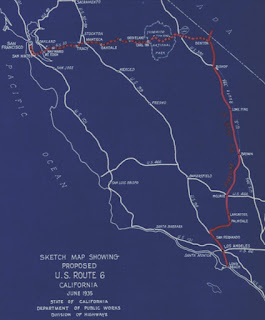 The AASHTO Database does not provide an explanation as to why US 6 to San Francisco via Tioga Pass was passed over in favor of the proposed extension to Long Beach.  A likely explanation would the then primitive nature of CA 120 west of Benton coupled that of the Tioga Pass Road.  The proposal to extend US 6 to Long Beach appears on the 1936 AASHO list of recommended additions to the US Route System. 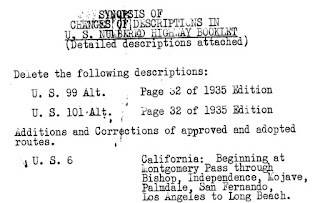 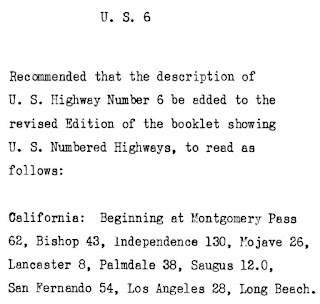 A December 1936 sketch map provided by the California Division of Highways shows the proposed extension of US 6 to Long Beach in detail. 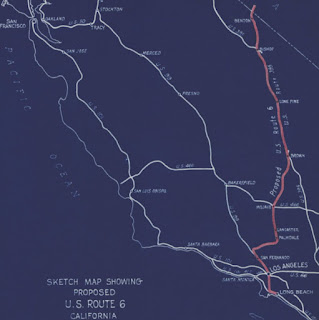 A letter dated February 1st, 1937 by the California State Highway Engineer to the AASHO Executive Secretary shows a detailed description of the planned extension of US 6 to Long Beach within California. 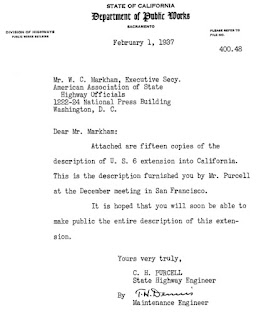 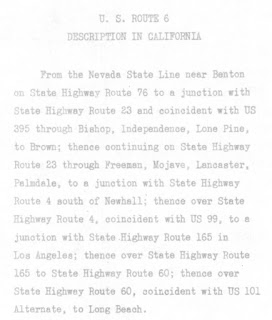 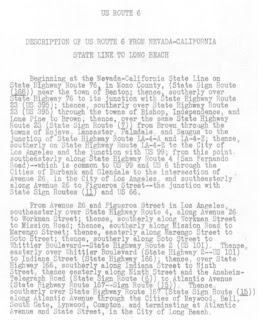 A letter dated February 8th, 1937 by the AASHO Executive Secretary to the State Highway Engineers of; Colorado, Nevada and California announced the approved extension of US 6 from Greeley, Colorado to Long Beach, California. 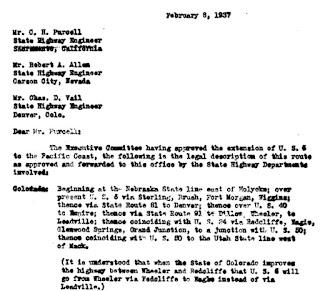 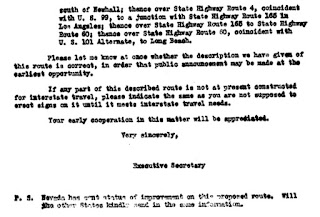 On September 17th, 1937 the Secretary of the Merced Chamber of Commerce sent a letter to the Bureau of Public Roads inquiring about the status of the proposal to extend US 6 to San Francisco via Tioga Pass. 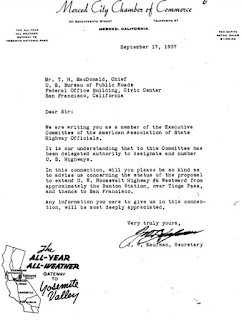 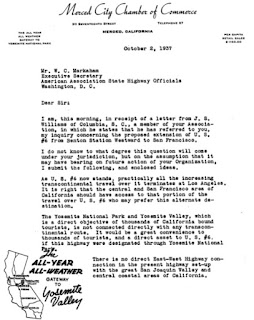 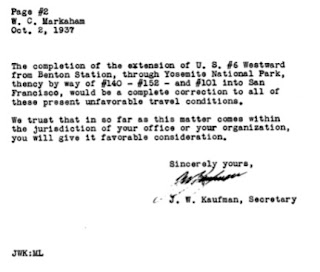 The AASHO Executive Secretary on October 8th, 1937 noted in a reply to the Merced Chamber of Commerce Secretary that US 6 was already approved to be extended to Long Beach. 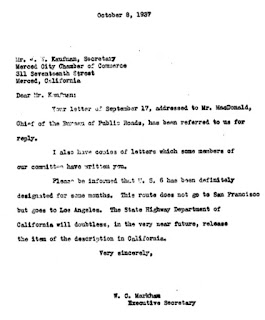 The Merced Chamber of Commerce Secretary replied to the AASHO Executive Secretary on October 12th, 1937 asking the AASHO Executive Committee to take up the concept of US 6A to San Francisco via Tioga Pass for consideration.  The Merced Chamber of Commerce stated an argument that the Tioga Pass Road of Yosemite National Park carried enough merit to be promoted by the US Route System for the proposes of tourism. 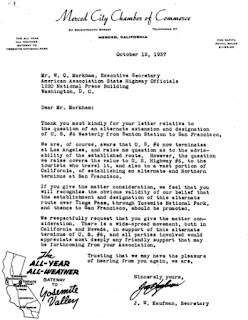 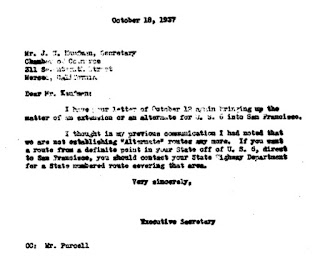