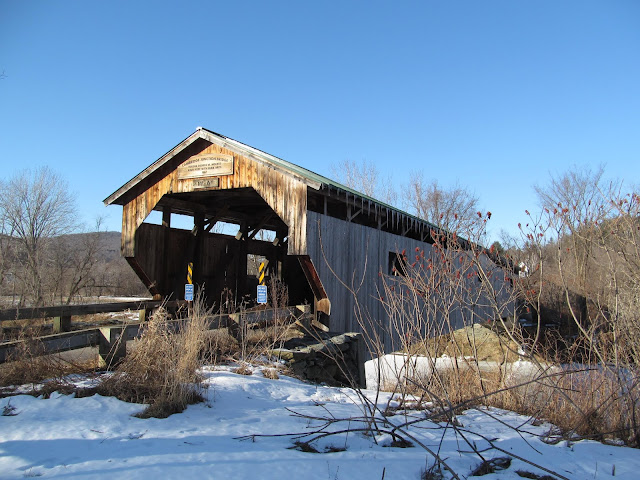 Also known as the Cambridge Junction Covered Bridge, the Poland Covered Bridge spans over the Lamoille River in Cambridge Junction, Vermont, just east of Jeffersonville. One of 14 historic covered bridges that remain within Lamoille County, the 153 foot long Kingpost with Burr arch truss designed covered bridge was built in 1887 by George Washington Holmes in order to improve access to a nearby railroad junction. The bridge is said to have one of the longest clear spans of its type within the United States. The bridge bears the name of Luke P. Poland, a prominent citizen and judge from Waterville, Vermont during the second half of the nineteenth century, who led a lawsuit against the Town of Cambridge that resulted in the construction of the covered bridge.

The Poland Covered Bridge was restored starting in 2001, undergoing a two stage process to restore the it to working order, using funds that were secured from the National Historic Covered Bridge Preservation Act, which had been authored by Senator James Jeffords of Vermont. Stage One of restoration involved stabilizing and raising the bridge three feet over the Lamoille River. Then, the purpose of Stage Two was to restore the bridge in order to carry light traffic. The bridge rehabilitation began in 2003 and was completed in 2004 by Alpine Construction of Schuylerville, New York.

The bridge had traditionally been open to pedestrians and snowmobiles during winter, and to motor vehicles after the last snow had fallen for the year, carrying traffic one vehicle at a time. Due to the proximity of the covered bridge to the Lamoille Valley Rail Trail, the bridge does get some traffic and visitors as a result of being next to the rail trail. I went to check out the bridge on a winter's day and had a nice, quiet experience during my visit.