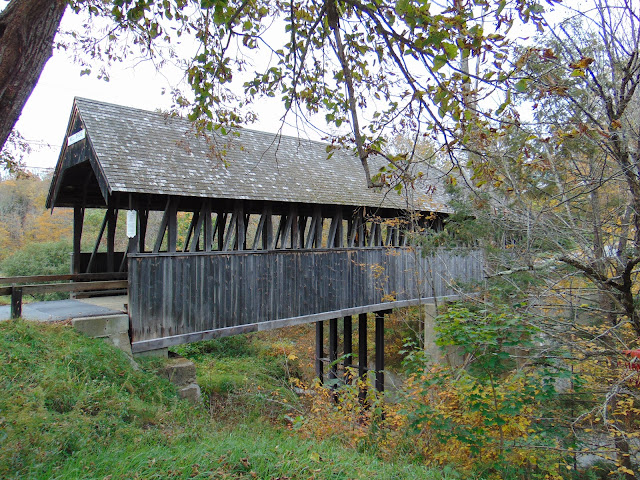 Also known as the Mill Bridge, the Meriden Covered Bridge spans over the Bloods Brook in Meriden (part of Plainfield), New Hampshire. The covered bridge in Sullivan County, New Hampshire is just down the hill from the Kimball Union Academy boarding school on Colby Hill Road, about a mile west of NH 120. The Kingpost through truss designed covered bridge is 82 feet long and is at the site of a popular swimming hole during the summer months.

Built in 1880, the current covered bridge is the third bridge located at this site. The previous two bridges were open timber structures. The present bridge was built by James Tasker for a fee of $465, with Levi Sanderson being paid $220 for building the bridge abutments. After the Meriden Covered Bridge was damaged by Hurricane Carol on August 30, 1954, the bridge was repaired at a cost of $3,000. In 1963, the bridge underwent further restoration and was rebuilt with steel beams that allowed the bridge carry a load of fifteen tons. This is thought to be the first covered bridge in New Hampshire to be repaired under the state's Town Bridge Aid program. In the spring of 1977, heavy snows caused the roof to cave in, with repairs costing $8,296. Further repairs took place in 1985, as the state repaired the substructure for $57,000. The Meriden Bridge is listed on the National Register of Historic Places and was added on August 27, 1980.