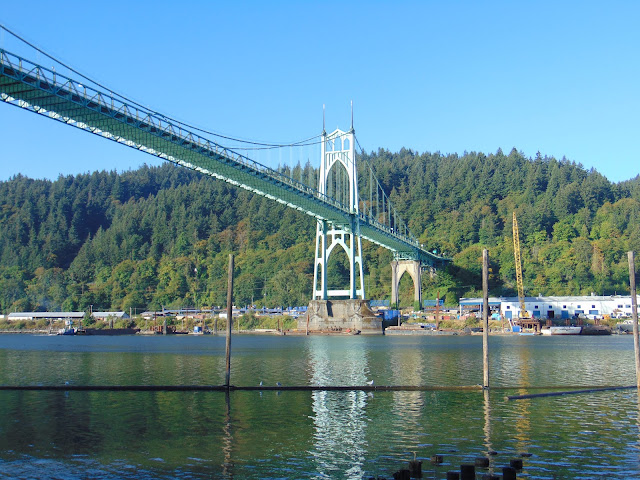 The St. Johns Bridge was a bridge built by popular demand, pushed by the Peninsula Bridge Committee, led by the St. Johns and Linnton communities that had been annexed to Portland in 1915. After World War I, Portlanders built the Sellwood, Burnside and Ross Island Bridges. City residents were not very eager to vote for funding another bridge, so residents and boosters of Linnton and St. Johns went to every school and grange hall in Multnomah County, performing vaudeville acts that dramatized their need for a bridge to replace the ferry. When the St. Johns Bridge opened, it was completed 21 months after construction began and it was a million dollars under budget. When the bridge opened on June 13, 1931, the Portland Rose Festival Queen, Rachael Atkinson Hancock, cut the ribbon. The opening of the bridge began with a parade that included the Royal Rosarians and an elephant.
When it was completed in 1931, the St. Johns Bridge was expected to be a cog in the burgeoning riverfront industrial economy and something that would help Portland thrive. While many of the mills and factories along the Willamette are no longer in operation, the St. Johns Bridge is still very much part of the fabric of the community. There were a number of contracts that were submitted for the construction of the St. John's Bridge, namely known bridge designers and engineers David Steinman and Conde McCullough. The two men submitted their contracts in 1928 for the St. Johns Bridge. The selection process was controversial as some people wanted the bridge to be designed by a local like Conde McCullough, while others wanted someone with a national reputation that David Steinman had. Ultimately, the committee selected Steinman's bid. He was inspired by the hills and evergreens that surrounded Portland and wanted the bridge to match the surroundings. The suspension style that he chose for the St. Johns Bridge included soaring Gothic arches topped with copper spires, which were intended to complement the "evergreen spires" on the trees around it.

David Steinman began designing the bridge in 1928, construction began on Sept. 3, 1929 and it opened on June 13, 1931 with a total construction bond of $4.2 million. When it was completed, it was the longest suspension bridge west the Ambassador Bridge in Detroit, Michigan. Before tackling the St. Johns Bridge, Steinman was finishing the largest suspension bridge in New England at the time, the Mount Hope Bridge over the Mount Hope Bay in Rhode Island. Steinman engineered 20 bridges in 1928, and throughout his career, he engineered nearly 400 spans before his death in 1960. Steinman has been quoted as saying "If you were to ask me which bridge I love best, I would have to say the St. Johns. I put more of myself into it than any other bridge."

David Steinman preferred using the color verde green, as he wanted the bridge to blend closer with the forest on the bridge's west side. However, pilots at the nearby Swan Island airfield objected to the proposed use of verde green, pushing for a more visible black and yellow striped color scheme. It is not known why anyone would suggest this color scheme, given that lights on the towers is the traditional way of warning aircraft of tall structures. This idea was not selected for the St. Johns Bridge either, and David Steinman's suggestion of verde green to blend in with the trees was chosen to be used. The St. Johns Bridge is now painted in a different shade of green, the ODOT green that you will find as the paint color on many other bridges in Oregon.

Today, you can visit and get photos of the St. Johns Bridge from a number of viewing areas. There is a viewing platform that gives you nice views of the bridge along the Ridge Trail in Forest Park, west of the Willamette River. I find that the more accessible views of the bridge come from Cathedral Park on the east side of the river, and that is where I took the photos that you find in this article. There is a small path to the shore and a boat dock area that afford the best views of the St. Johns Bridge. 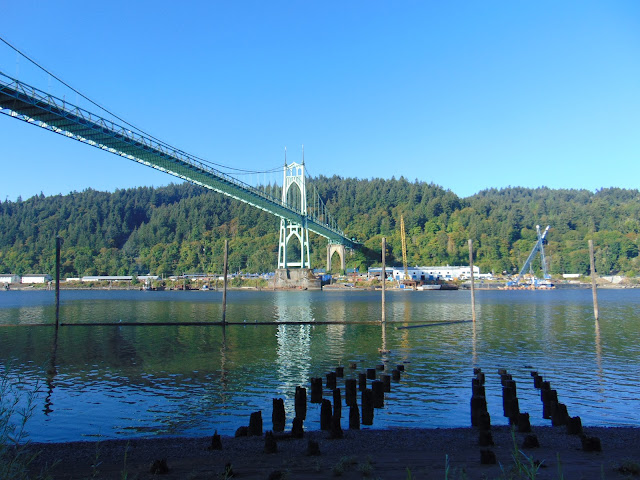 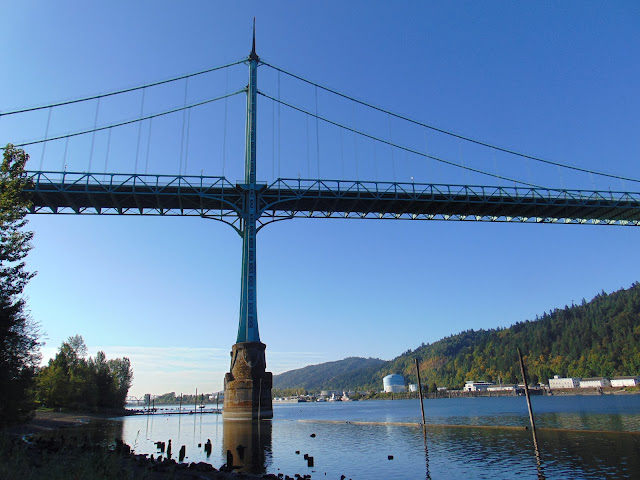 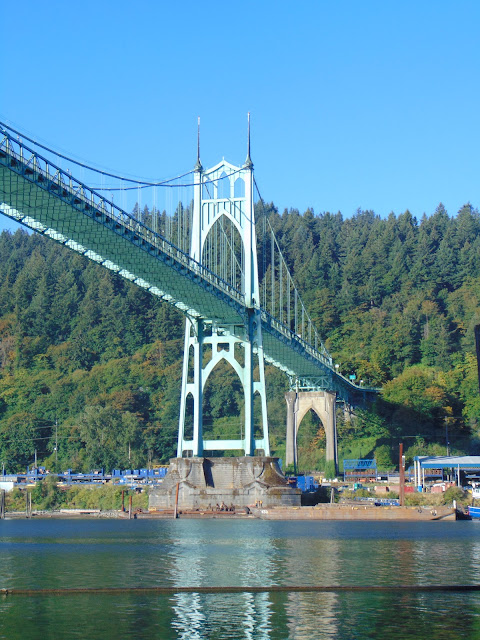 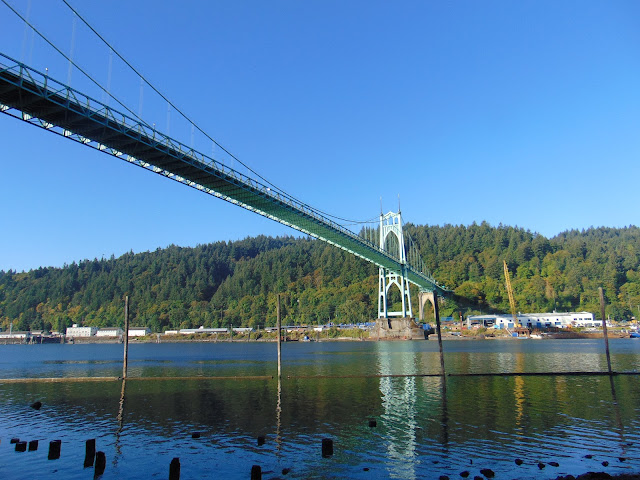 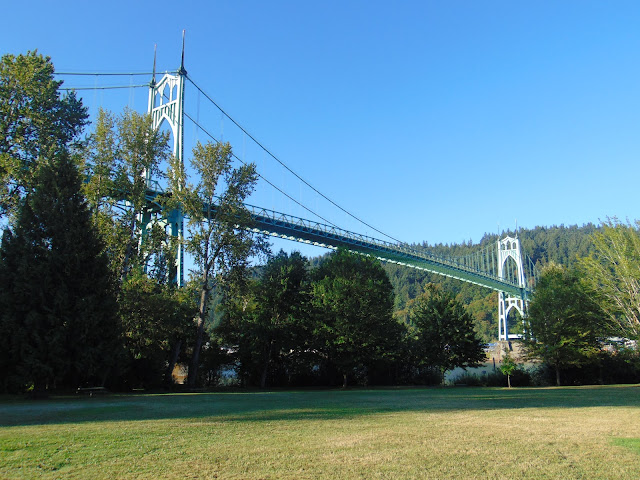 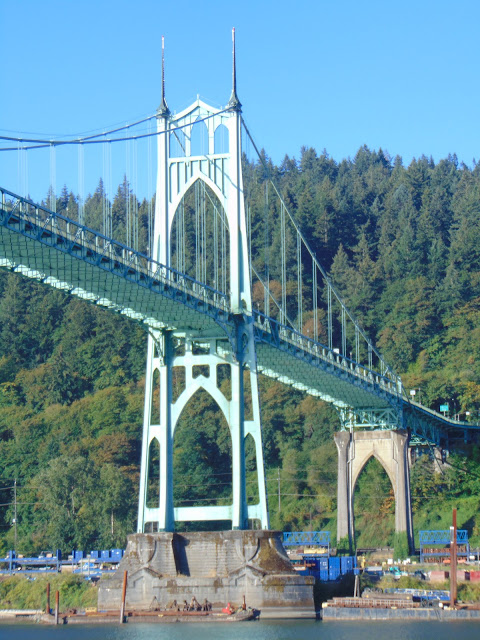 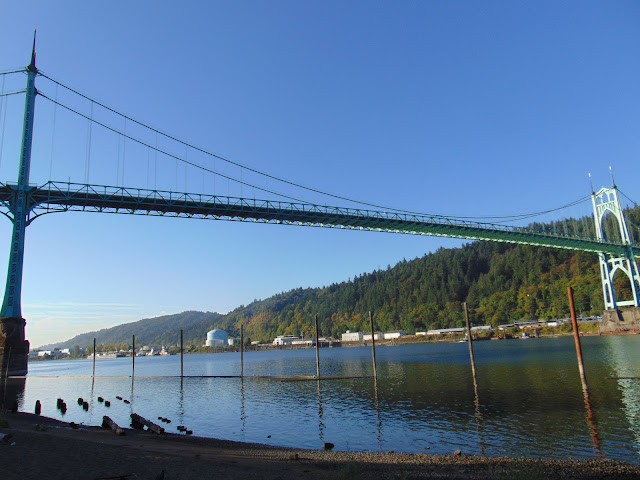 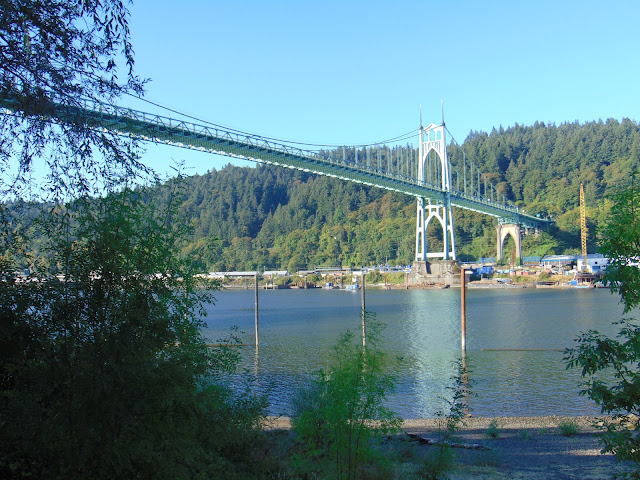 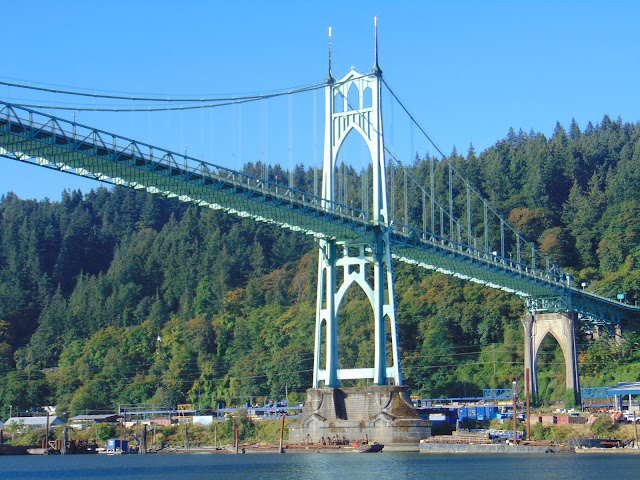 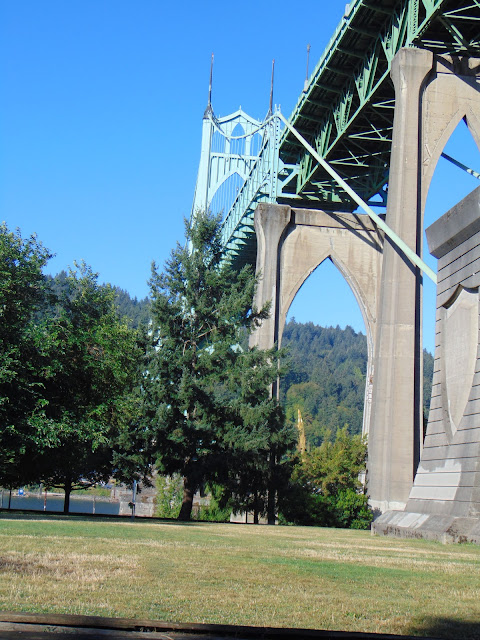 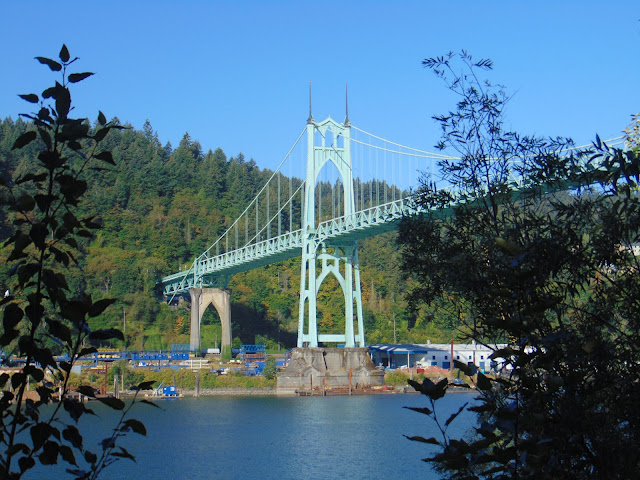