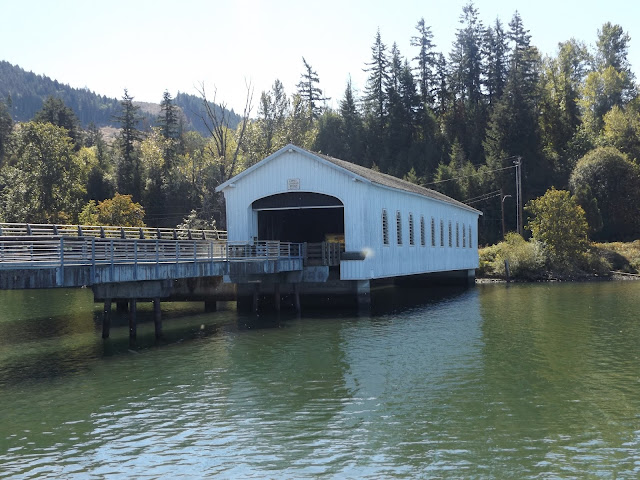 As you head on Oregon Highway 58 (OR 58) between Eugene and the Cascades, you will see a covered bridge as you drive along the Dexter Reservoir. This is the Lowell Covered Bridge, the widest covered bridge in Oregon. At 210 feet long and 24 feet wide, this Howe through truss designed covered bridge has an interesting history, and while it is no longer open to motor vehicles, it has been given a second life as an interpretive center about the covered bridges in and around Lane County, Oregon.

In 1874, pioneer Amos Hyland settled in Lane County on the Middle Fork of the Willamette River. He established the town of Lowell, opened the local post office in 1880 and operated a ferry across the river until 1907. That year, the Lowell Covered Bridge was constructed by Nels Roney and a crew of eight men. The bridge was built to bypass an expensive ferry to cross the Willamette River and the route was a main passageway for settlers and supplies to reach the Willamette Valley at the turn of the 20th Century. This bridge was part of a larger project that Roney was working on to rebuild many of the covered spans that were destroyed by snow and flooding. During the 1940s, a truck accident severely damaged the bridge knocking its truss out of alignment, so a new bridge had to be constructed.

The new covered bridge was completed by 1945 for a cost of $25,473. The bridge was built to a maximum width of 24 feet to allow easy passage for motor vehicles, and the roof was added two years later. Then in 1953, with the impending construction of Dexter Dam, the bridge had to be raised an additional 6 feet to accommodate the forecasted water level increase. The dam was completed in 1955 and now when Dexter Reservoir is at capacity, the bridge clears the water by approximately 2 feet, and from what I have read. In 1981, a new concrete bypass bridge was built and use of the covered bridge was discontinued.

The Lowell Covered Bridge lives on as a self-guided interpretive center that showcases for visitors the history of the local area along with history of the Lowell Covered Bridge and other covered bridges in Oregon. One of the displays even has a small model with a section of the outside of the bridge cut-away so you can see how the structure was designed. There is a picnic area, plus places to go birdwatching or fishing. It sits right on the edge of the Willamette River, where on one side you can see the dam, and on the other there are park benches. It is an enjoyable stop along the way for wherever your travels along OR 58 take you.