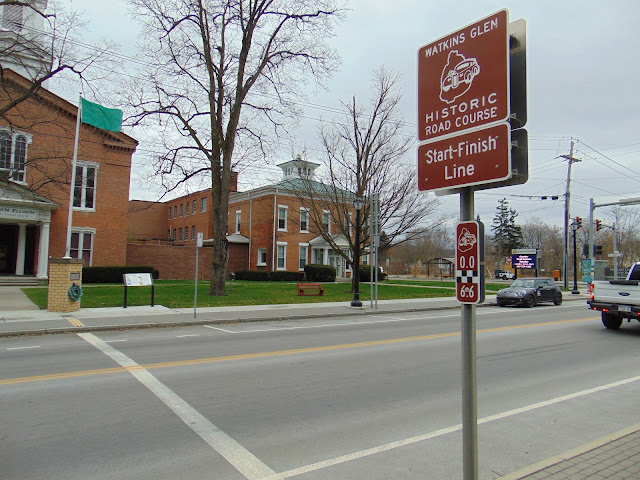 Situated at the south end of Seneca Lake in the Finger Lakes region of Upstate New York, Watkins Glen is well known for wineries along Seneca Lake and waterfalls at Watkins Glen State Park. But one thing that gives the town much renown is its connection to the world of auto racing. The raceway at Watkins Glen International holds a number of big races every year, such as Six Hours at the Glen and the NASCAR Cup Series. The history of auto racing at Watkins Glen starts during the 1940s when the race followed a course on local roads and also through the streets of downtown Watkins Glen. It's a course that you can follow today, preferably at a more moderate speed than the auto racers of yore raced at. Let's explore the history of the original course, how it came to by and why it is no more.

Organized races through the village of Watkins Glen and surrounding roads were first proposed and started by Cameron R. Argetsinger in 1948, marking the beginning of post-war sports car racing in this country. Mr. Argetsinger was a law school student at Cornell University and also a World War II veteran who hailed from Ohio, but who had spent much time with family in the Watkins Glen area during his life, falling in love with the roads around Watkins Glen as a young driver. After World War II ended, Argetsinger longed for a place to drive his MG TC, so during the 1947 winter holiday, he laid out a race course that used the roads in and to the west of Watkins Glen. He pitched the idea to the local Chamber of Commerce in Watkins Glen and then to the Sports Car Club of America (SCCA) and both groups approved his plan.

The road course would start and finish in front of the Schuyler County Courthouse on Franklin Street (NY 14 / NY 414), head north and then west on NY 329 out past Watkins Glen State Park, pass along a stone bridge that crossed Glen Creek, and then back east again on NY 409 back into downtown Watkins Glen, passing by various landmarks along the way. The entire 6.6 mile course ran on public roads, which were both paved and unpaved at the time, and crossing the New York Central Railroad, but Argetsinger did not see this as an overwhelming challenge. Permits need to be obtained from six different government entities to close all of the streets and trains had to be stopped for races.

The first race at Watkins Glen was held on October 2, 1948, starting with a four lap qualifying race followed with an eight lap grand prix race. A total of fifteen cars started the eight lap, 52.8 mile Grand Prix, with ten cars ultimately finishing the race. The winner was Frank Griswold, of Wayne, Pennsylvania, driving an Alfa Romeo 8C2900 coupe, followed by Briggs Cunningham in his famous Bu-Merc car. Other prominent entrants included Charles Addams, who was the cartoonist who created the Addams Family, Miles and Sam Collier, who were major figures in the history of US Road Racing either side of World War II, and William Milliken, a noted aircraft and race vehicle dynamics expert. Milliken rolled his Bugatti 35 on the last lap of the qualifying race, giving the name of Milliken's Corner near the bottom of the hill on NY 409 its name.

The original historic road course at Watkins Glens was continued to be used for the race through 1952. Tragedy struck at that race when an accident that injured 12 spectators and killed a seven year old boy brought an immediate halt to the use of the Watkins Glen road course, while the race was in progress. Because of the accident, road racing at Watkins Glen was at a crossroads in the late fall of 1952 and into the early months of 1953. A short time after the September race, a public meeting was held to determine if the Watkins Glen community should hold more races on the existing circuit or find a new circuit within Schuyler County. The general feeling among the community was that a new, safer course should be found.
In its January 1953 session, the New York State Legislature considered two proposed laws to ban racing on public roads. One bill was passed in the New York State Senate but never made it out of committee in the New York State Assembly. In the end, there was never a law enacted to ban racing on public roads in New York State as a result of the tragedy at Watkins Glen in 1952. What wound up happening was New York State withholding issuing of permits for racing on state roads, which doomed the use of the original 6.6 mile road circuit at Watkins Glen, which was made up of more than 85% state maintained highways. In addition, the insurer of the race, Lloyd's of London, refused coverage of the race if it ran through downtown Watkins Glen.

These events forced race organizers to find another course to use. Five potential sites for the circuit were considered, including a 7.2 mile course in the Town of Orange; two in the Town of Dix – one at 8 miles and the other 4.6 miles of length; and two circuits on east side of Seneca Lake – a 4.8 miles course in the Town of Hector and a 6.7 miles course in the Town of Montour (which overlapped part of the Hector circuit). Both the Hector and Montour layouts ran under the Lehigh Valley Railroad underpass at the Dolphsburg Road corner before making a right turn.
Ultimately, the 4.6-mile course ran along Baker Hill Road, Hedden Road, Bronson Hill Road, Wedgewood Road, and what is now Montour-Townsend Road in the Town of Dix was used, ditching the sweeping turns and organic bends of the original course for plenty of right angle turns, one sharply acute angle turn, and lots of long straightaways. Racing began on the second Watkins Glen course in 1953. Most of the roads proposed for use as a replacement circuit were made up of county and town roads which were narrow and had little in the way of paved surfaces. They were largely gravel surfaces and the circuit selected would require widening and paving. It didn't last long there, though, and some have since described the second course as a temporary one. Criticized by the racers and still on public roads, it led Argetsinger and other race organizers to seek out a more permanent and dedicated location after the 1955 Grand Prix. This dedicated course was built on 550 acres of farmland in the Town of Dix, just south of Watkins Glen. Shorter than the two previous courses at 2.3 miles in length, the new course came together with input from racers and Cornell University engineering professors alike, incorporating sweeping turns, a few straightaways and a couple sharp turns. The third course opened in time for the 1956 Grand Prix and in 1957, hosted a NASCAR race for the first time.

Today, there are plenty of locations around Watkins Glen where you can discover the rich history of auto racing around town. If you go to the race course at Watkins Glen International, you can drive the course in your own car at a Drive The Glen event. Vintage race car signs mark the numbered streets that run perpendicular to Decatur Street, from 2nd Street to 15th Street, a block over from where the original circuit started and ended on Franklin Street. On Franklin Street is where you will find a stone marker and a green flag that commemorates the start and finish line of the first Watkins Glen Grand Prix. Each September, the Watkins Glen Historic Racing Committee adds from three to six new drivers at the annual Grand Prix Festival. A Watkins Glen Drivers Walk of Fame stretches along the sidewalk in front of The International Motor Racing Research Center on Decatur Street as well. The historic road course is well marked and easy to follow as well. Signs to mark the original road course were put up in 2019 as part of the Watkins Glen village paving and downtown sidewalk and restoration project, and the signs were designed using a logo from the local historical society.


Take a virtual drive of the historic road course at Watkins Glen. Photos are following a clockwise direction from start to finish. A lap around by car the 6.6 mile course should take you about 10-15 minutes to complete. Gentlemen (and ladies), start your engines...

Anonymous said…
Hi, Please check out why this is called the airline highway in Wikipedia. It has nothing to do with aircraft following the fault line.
1:03 AM