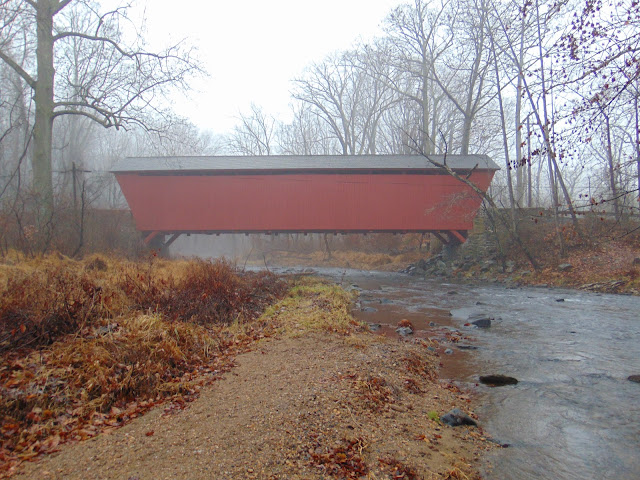 Originally built in 1865 to cross the Little Gunpowder Falls between Baltimore and Harford Counties in Maryland, the Jericho Covered Bridge is the last remaining covered bridge in both counties. Only about 300 yards downstream from Jerusalem Mill, the Jericho Covered Bridge spans 92 feet across the Little Gunpowder Falls and is a Burr arch through truss designed covered bridge, featuring a single span queenpost that was added in 1937.

David Lee II, one of the mill owners in the communities known as Jericho and Jerusalem and considered to be the overseer of the roads in the area, lobbied for a bridge to connect the cotton mills of Jericho, a spade factory and the wrought iron works at Franklinville in Baltimore County, with the flour mills and blacksmith shops at Jerusalem in Harford County. There is history with the Lee family and covered bridges, as his father, Ralph Sackett Lee, was successful over thirty years earlier at having a covered bridge built next to the Jerusalem Mill that also connected Baltimore and Harford Counties. This led to a petition effort to have a new bridge built in the local area.

In February of 1864, citizens of Harford and Baltimore Counties signed petitions requesting a bridge be built across the Little Gunpowder Falls. The petitions were brought to the General Assembly on February 24, 1864 as a joint effort by Mr. Hitchcock of the House of Delegates representing Harford County and by Dr. David Sterett Gittings, who represented Baltimore County in this effort. A bill was passed in March 1864 titled "An Act to Authorize the Commissioners of Baltimore and Harford Counties to construct a bridge across the Little Gunpowder Falls, between Jericho and Jerusalem Mills and to levy a sum of money therefore."
Advertisements for proposals appeared in local newspapers on June 17, 1865. On July 5, 1865, the contract was awarded to a Baltimore machinist by the name of Thomas F. Forsyth in the amount of $3,125. It also showed that Hugh Simms (who was the owner of the nearby Franklinville Cotton Factory) was appointed to oversee the building of the bridge.

The Jericho Covered Bridge went through major rehabilitation projects in 1937 and 1983. During the 1937 rehabilitation, a Queenpost Truss was added to its Burr Arch and Multiple Kingpost Truss. The Queenpost Truss stretched across all ten side panel sections of the bridge. Metal braces, tie rods, new flooring and new walls were also added. Still, the bridge was closed again in December of 1980 for fear the flooring was unsafe for travel. During the 1983 rehabilitation, the bridge was rehabilitated at a cost of $280,000 and was reopened on July 7, 1983. Part of the repairs to the bridge included installing new flooring and adding five steel reinforcing girders hidden underneath its deck for support to a portion of the travel section of the bridge. With the addition of the reinforcing steel, this allowed for a safe vehicle weight of 15 tons to cross. Also, a new roof and repairs to the masonry abutments were completed.

2009 was a kind year for the six remaining historic covered bridges in the State of Maryland, as a lot of grant money started pouring in for renovation of the bridges. That year, the National Historic Covered Bridge Preservation Program awarded a grant of $1.328 million for the rehabilitation of the Jericho Covered Bridge. Originally, $80,000 in local funding by Harford and Baltimore counties increased the amount available and subsequent funding brought the total of all funding to approximately $1.7 million. The bridge as closed on March 31, 2015 for the upcoming renovation, which was contracted to Kinsley Construction, Inc, with work for heavy timber replacement being subcontracted to Barns and Bridges of New England. Work on the bridge included replacing all damaged heavy timber, a new cedar shingle roof, new floor, installation of a security camera, painting and fire retardant, anti-graffiti coating, repairs to the abutments, new guide rails and the addition of an outside overheight protection system (which are often referred to as headache bars).

By the end of April 2015, all of the siding was removed from the bridge along with the bridge's roof. The Harford County side wingwalls were removed so the bridge could be "rolled" off from over the stream to Jericho Road, so additional repairs could take place. The bridge was lifted from the flooring, cribbed, then removed from over Little Gunpowder Falls in June of 2015. By August, the steel supports were cleaned, primed and painted and a new flooring installed. By November, all heavy timber that required replacement was completed and the bridge was rolled back over the new flooring. About 25% of the heavy timber needed replacing. In late November, work began to rebuild the covered bridge's portals, install new siding, a new cedar shingle roof, and wingwalls on the Harford County side were rebuilt. The bridge was reopened to traffic and a ribbon cutting ceremony took place in April 2016.

There are also stories of paranormal activity surrounding the Jericho Covered Bridge. The covered bridge was originally built for horse drawn carriages to cross and it is possible that their ghosts may spook some modern day people crossing the bridge. Many late night drivers claim that their cars have stalled crossing the Jericho Covered Bridge, while other visitors have sprinkled powder on their cars and insist that hand prints were spotted in the powder after passing through the enclosed structure. The most gruesome tales about the bridge come from witnesses who claim to have seen the silhouettes of people hanging from the bridge’s trusses. Local legends explain that this may be because the bridge was used in the horrific lynching of enslaved Blacks who managed to escape their captors before slavery was made illegal. Other haunted sightings have included a girl carrying a basket of flowers, a woman with a badly burned face, and an animal-like creature said to protect the bridge from unwanted visitors.

I've had the chance to visit the Jericho Covered Bridge on a couple of occasions, in December 2011 and January 2022. Parking to see the covered bridge is about 300 yards to the north at Jerusalem Mill, which is also worth visiting if you are in the area. From Jericho Road, there are short trails that lead you to both Jerusalem Mill and Little Gunpowder Falls, where you can get a nice side profile of the covered bridge. As I was preparing to write this article, I had noticed that the bridge was renovated since my visit in 2011, and since I just happened to be planning to spend a few days nearby in Harford County, I took the opportunity to get some updated photos.


How to Get There (Jericho Covered Bridge):