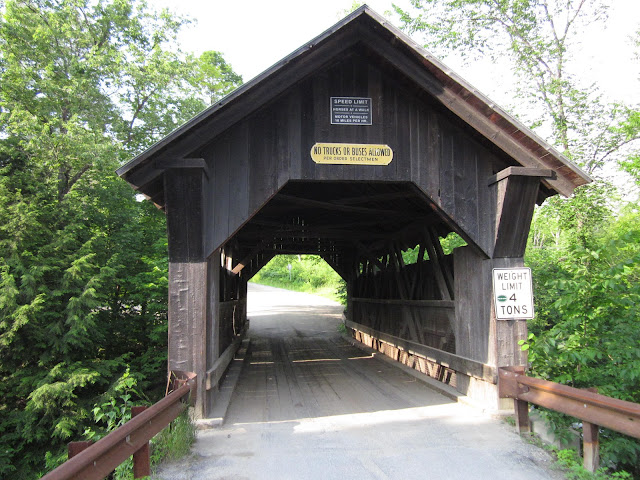 Also known as Emily's Bridge or the Stowe Hollow Covered Bridge, the Gold Brook Covered Bridge crosses over Gold Brook in Stowe, Vermont. The 49 foot long bridge was built by John W. Smith in 1844 and the bridge was rehabilitated in 1979. The last historic covered bridge in Stowe, Vermont is also the last remaining Howe through truss bridge built in the 19th Century that is still on a public roadway in Vermont. While the Gold Brook Covered Bridge is set aside a few miles away from the hustle and bustle of downtown Stowe, the big story with this covered bridge is steeped in local legend and lore.

The Gold Brook Covered Bridge has stories that relate to the paranormal. Many people claim to have experienced strange events at the bridge and some even believe that the bridge is haunted. The covered bridge even has an alternate name of Emily's Bridge because of this lore. There are a few competing stories about the haunted nature of the bridge, all of which include a woman by the name of Emily and none of which have a happy ending. One story goes that Emily was in love with a man named Donald, who did not care much for Emily, but managed to get her pregnant. When Emily's father found out about the pregnancy, both Emily and Donald jumped to their deaths from the bridge. Another story goes where a woman named Emily planned to meet her fiancé at the bridge so they could elope. But her fiancé never showed up, and in despair, she hung herself from the rafters.

Even though the bridge may or may not be haunted by Emily's ghost, the bridge is frequented by amateur ghost hunters, tourists and others hoping to see something supernatural. It is possible that the story of Emily’s Bridge doesn’t go back to the 19th Century, but rather during the 1970s. A woman by the name of Nancy Wolfe Stead claimed that she was the one who created the story of Emily to scare local youth. But regardless of whether you are interested in paranormal activity or you're like me and just like to visit covered bridges, the Gold Brook Covered Bridge is worth the detour if you are in the Stowe area.