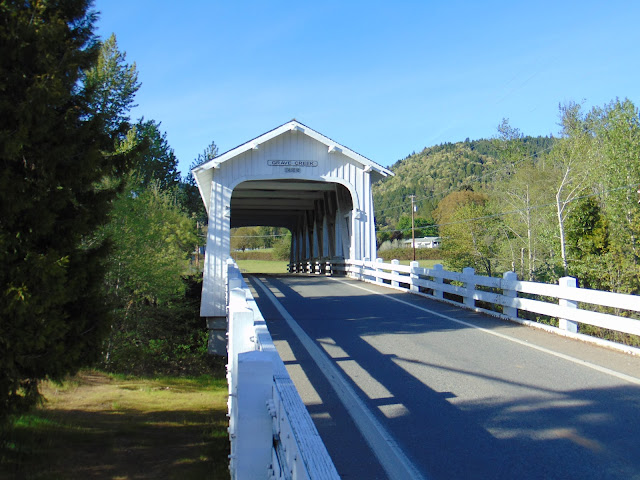 The Grave Creek Covered Bridge has a few unique claims to fame. This covered bridge is the only covered bridge that is visible from Interstate 5 (I-5) and is the last covered bridge that was once part of the route of historic US Highway 99. It is also the only remaining covered bridge located in Josephine County, Oregon, which is a testament to its longevity. But there are some more snippets of history that surround this bridge in Sunny Valley, Oregon.

The bridge was built in 1920 as part of the Pacific Highway construction between Vancouver, British Columbia and the Mexican border. Records show that a contract was awarded by the Oregon State Highway Department in April 1920 to one J. Elmer Nelson at a cost of $21,128.65. Just four months later, traffic first passed through the bridge portals, and the bridge carries one lane of traffic. A Howe through truss design was used for the covered bridge, which is 220 feet in length, but features a main span of 105 feet with "dumb bell" concrete piers. The covered bridge includes six gothic style windows on either side, concrete abutments, a Howe truss, rounded portals and a shake roof. When I-5 was built nearby, ownership and maintenance of the Sunny Valley Loop Road and the Grave Creek Covered Bridge were given to Josephine County. During the late 1990s, extensive repairs were made and the portal openings were made more rounded, and repairs were completed in 2001 when the bridge reopened to traffic.

The history of Sunny Valley and Grave Creek start well before the covered bridge was built. In the fall of 1846, the first emigrant train from Fort Hall, Idaho traveled the southern route of the Applegate Trail on their way to the Willamette Valley, camping on the north side of this creek, then known as Woodpile Creek. One of the members of the emigrant train, a 16 year old by the name of Martha Leland Crowley, died of typhoid fever during the encampment and was buried 150 feet north of the creek on the east side at a white oak tree that was later removed for the present roadway. As a result of this misfortune, the name of Grave Creek was given to the this body of water.

When James H. Twogood laid out his land claim in the fall of 1851 and filed it on May 1, 1852, he named it the Grave Creek Ranch in memory of that unfortunate death. McDonough Harkness, his partner, was the first postmaster of Josephine County in the newly named town of Leland on March 28, 1855. Harkness was not postmaster for long, as he was killed in April 1856 while riding dispatch for the Army during the second Indian War in southern Oregon, which had started in October 1855. A major encounter of the war took place some 8 miles west of the present day Grave Creek Covered Bridge at the Battle of Hungry Hill. This engagement produced some 37 dead, wounded and missing. Some of these soldiers were buried at the corner of the present Leland Road and the old Pacific Highway.

In 1860, James Twogood's Grave Creek Ranch became an overland stage stop for the California Oregon Stage Line. The California Oregon Stage Line had a route between Sacramento, California and Portland, Oregon, and can be seen as a predecessor to the Pacific Highway, US 99 and I-5. A new hotel and farmhouse were built to accommodate the stage company when they made stops in the area. President Rutherford B. Hayes, his wife and their entourage spent the night at the Grave Creek Ranch on September 28, 1880.
While the Grave Creek Covered Bridge is in a peaceful setting today, as you can see, it packs a lot of history and is worth taking the time to explore. There is a parking area at the south end of the bridge, along with an interpretive sign that explains the history of the area.