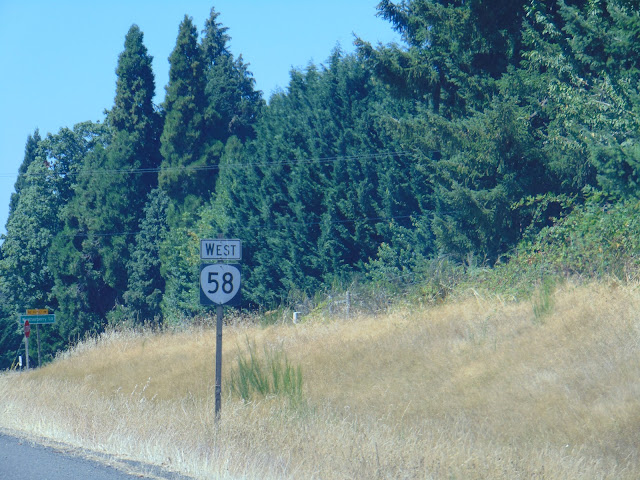 Also known as the Willamette Highway No. 18, the route of Oregon State Highway 58 (OR 58) stretches some 86 miles between US 97 north of Chemult and I-5 just outside of Eugene, Oregon. A main route between the Willamette Valley region of Oregon with Central Oregon and Crater Lake National Park, the highway follows the Middle Fork Willamette River and Salt Creek for much of its route as it makes its way to and across the Cascades, cresting at 5,138 feet above sea level at Willamette Pass. That is a gain of over 4,500 in elevation from where the highway begins at I-5. The upper reaches of OR 58 are dominated by the principal pinnacle that can sometimes be seen from the highway, Diamond Peak, and three nearby lakes, Crescent, Odell and Waldo (Oregon's second largest lake). OR 58 is chock full of rivers, creeks, mountain views, hot springs and waterfalls within a short distance from the highway. OR 58 was numbered as such by the Oregon State Highway Department in 1940.

OR 58 is a delightful scenic drive to Crater Lake, with plenty of unique and memorable adventures along the way. The road takes you past Pleasant Hill and the Bristow Monument, dedicated to early settler Elijah Bristow. In 1846, Bristow was among the first to make his way down what would become Lane County’s Free Emigrant Trail, a free alternative to the Barlow Toll Road further north and a predecessor to today's OR 58. Pleasant Hill is known for a innovative rubber asphalt track that routinely hosted the University of Oregon athletes training under Bill Bowerman in the 1970s. This is also the hometown of author Ken Kesey, who wrote "One Flew Over the Cuckoo's Nest". The highway then follows east past the Dexter Reservoir, the Dexter State Recreation Site, the Lowell Covered Bridge and Lookout Point Lake as it works its way southeast towards the Willamette National Forest.

Continuing southeast on OR 58, you will eventually reach Oakridge, the largest town along the highway. Oakridge is known as the "The Mountain Biking Capital of the Northwest", but it boasts some other items of interest as well. The Willamette Fish Hatchery is located in Oakridge and Oregon's longest covered bridge, the Office Covered Bridge, is located nearby in Westfir. Oakridge got its start in the lumber industry. Around 1888, this area was a corridor for pioneers called Big Prairie and then it was called Hazeldell. The community eventually organized as Oakridge in 1912. Early on, the nearby railroad played an important role in Oakridge's economic development and supported the growth of logging.

Past Oakridge, OR 58 splits away from the Middle Fork Willamette River as it starts its march towards the Willamette Pass. Fans of soaking in hot springs will want to make the stop at McCredie Hot Springs, located along OR 58 about 10 miles east of Oakridge. After the hot springs, OR 58 continues its rendezvous with Salt Creek as it climbs in elevation. The highway goes through a mountain tunnel and about 11 miles after the McCredie Hot Springs, there is an access road that takes you to Salt Creek Falls. Plunging 286 feet, Salt Creek Falls is the second highest continuous waterfall in Oregon, with Multnomah Falls being the first. At the Salt Creek Falls Observation Site, there is a wheelchair accessible viewing platform at the top of the falls, or you can hike to the bottom.

Beyond Salt Creek Falls, OR 58 approaches its top elevation at Willamette Pass, but not before passing a few sno-parks that are perfect for winter sports enthusiasts. You have the Waldo Lake Sno-Park, followed by the Gold Lake Sno-Park and the Willamette Pass Ski Area. The Pacific Crest Trail crosses OR 58 at Willamette Pass, then OR 58 begins its gradual descent eastward towards US 97. At this point, you are also no longer in the Willamette National Forest, but you are now in the Deschutes National Forest. OR 58 then passes alongside the northern shores of Odell Lake and then passes by Crescent Lake. From here, the firs and spruces found west of Willamette Pass are replaced by ponderosa pines that are more suited towards semi-arid climates and they are your companion until you reach US 97.

Let's take a journey eastbound on OR 58 (yes, I know the cover photo is of a westbound OR 58 - that was taken on a different trip). 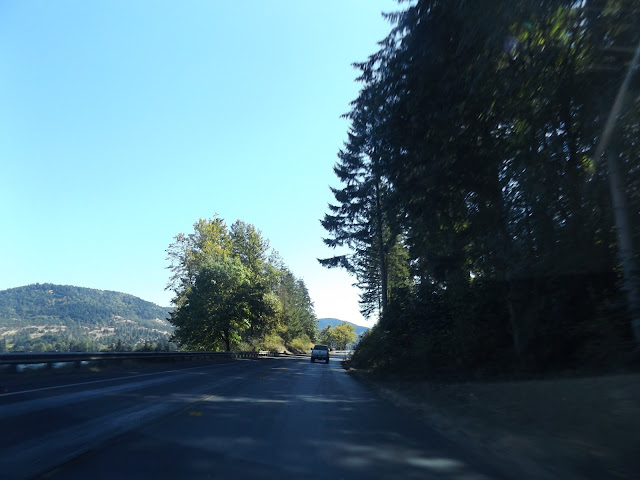 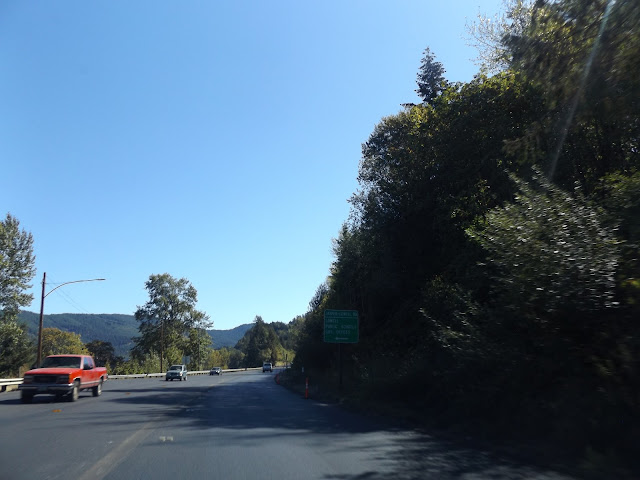 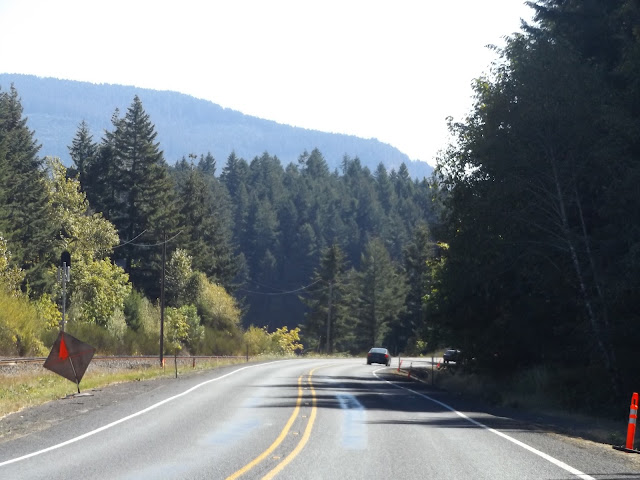 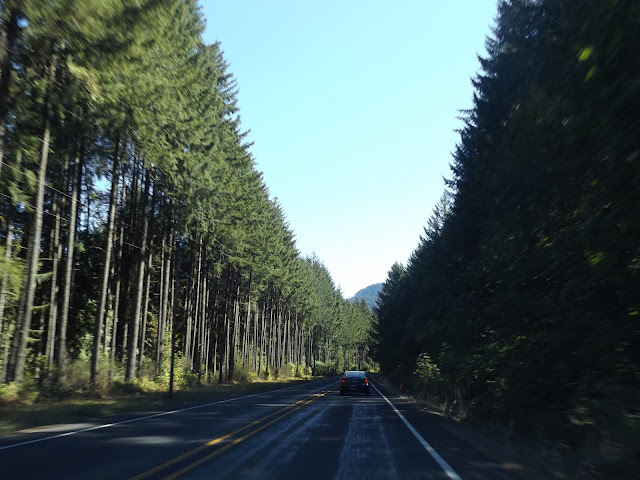 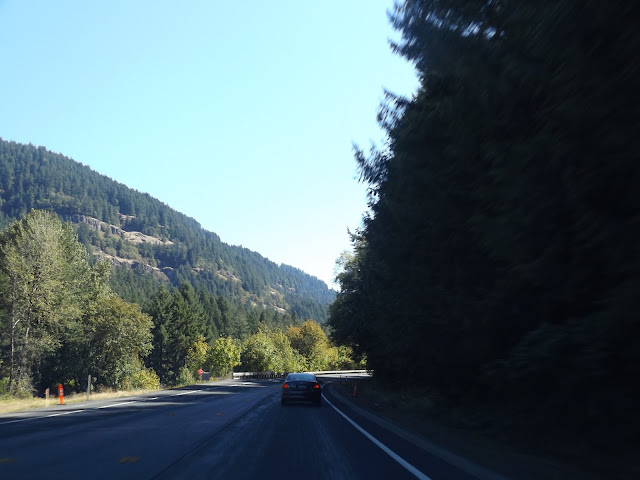 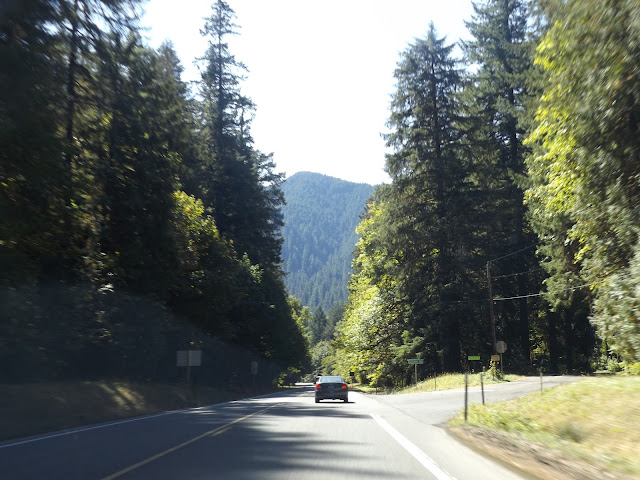 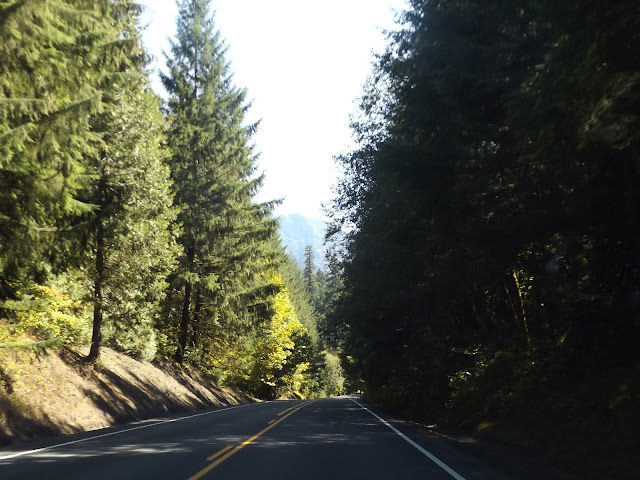 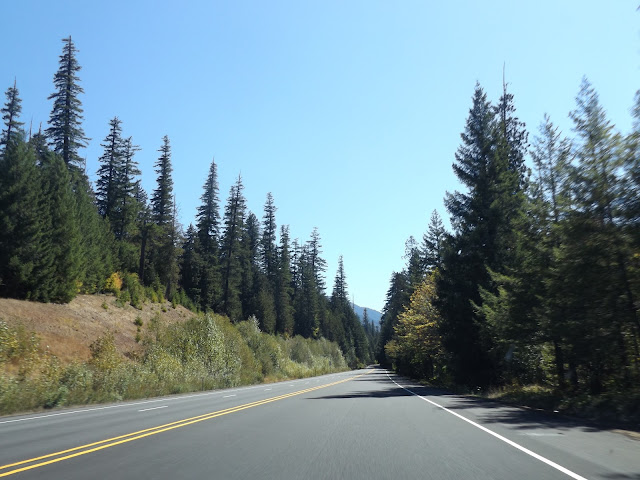 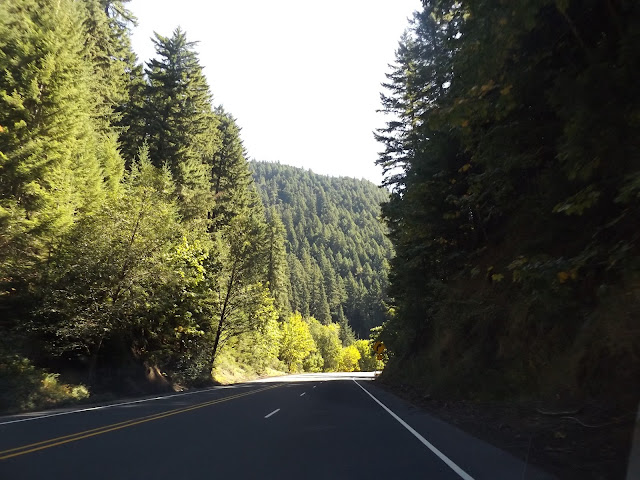 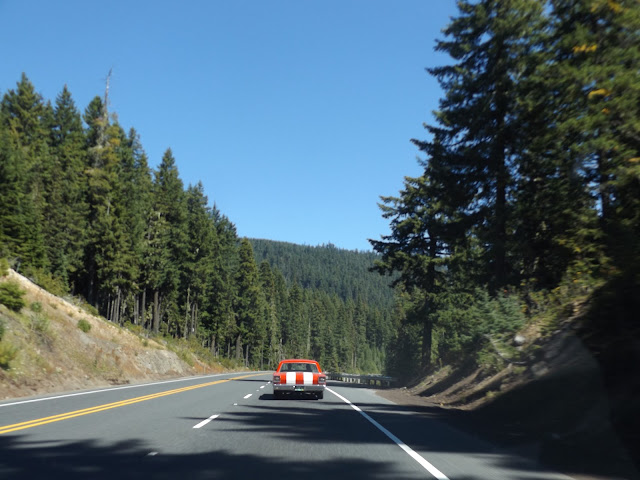 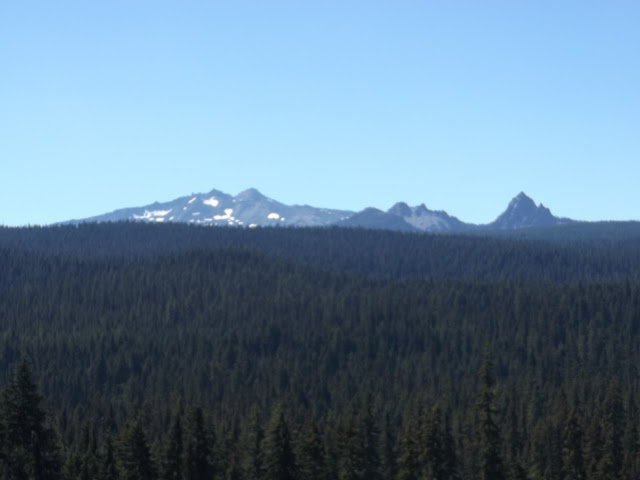 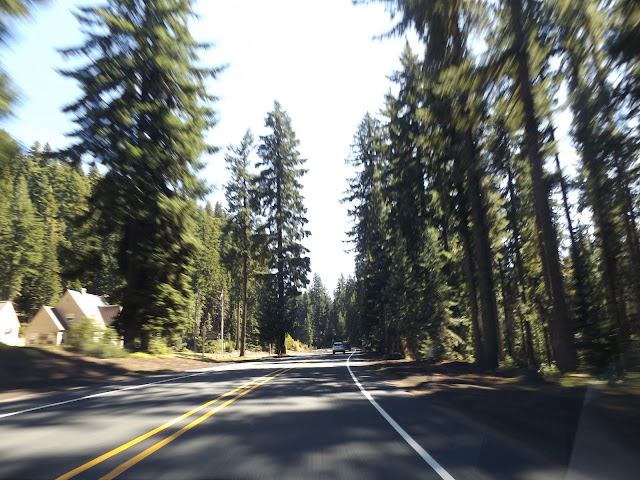 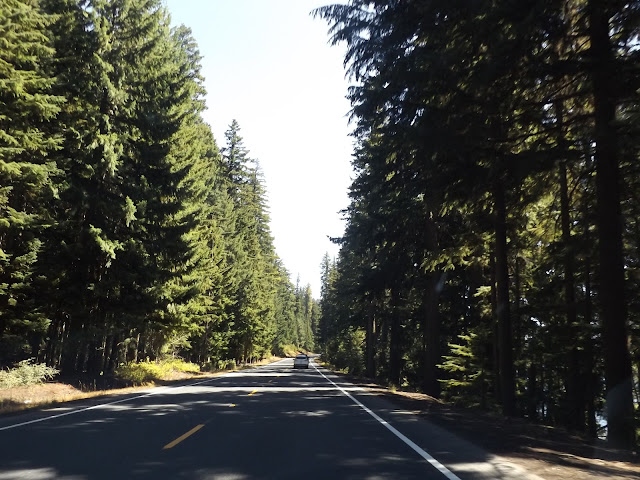 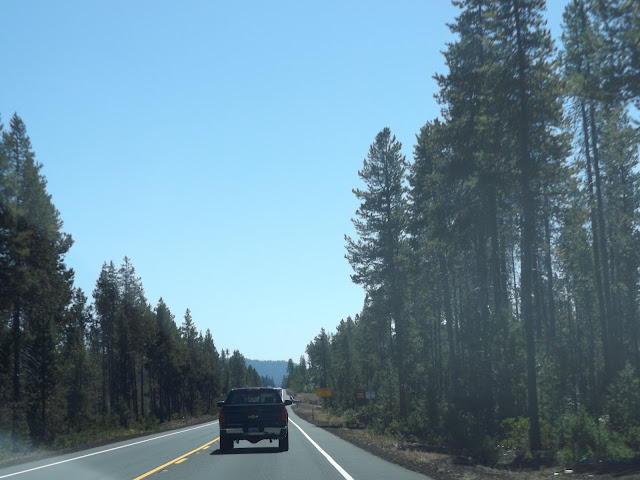 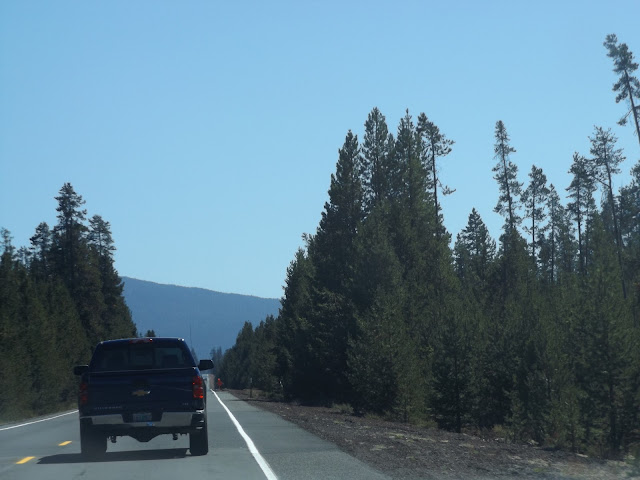