Interstate 79 to Beckley, WV? It was supposed to happen. 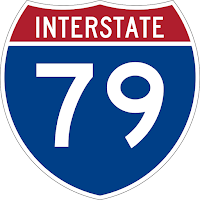 In October 1961, the United States Bureau of Public Roads (BPR) authorized a southern extension of Interstate 79 from Washington, PA to Charleston, WV.  This nearly 160-mile addition to the interstate system in West Virginia didn't come as a surprise, but where it ended did.  The consensus was that the two-state extension of the Interstate would follow US 19 and end at the West Virginia Turnpike in Beckley.  After three years of lobbying by Pennsylvania and West Virginia - why and how did this change?

When the Interstate Highway System was authorized in 1956 - a north-south route linking the Pittsburgh area to Erie, PA was included in the mileage.  This route would be known as Interstate 79 and terminated at Interstate 70 in Pittsburgh's Golden Triangle.  Interstate 70 would follow Pittsburgh's Parkway West to near Roslyn Farms and then head south to Washington, PA.  Alignment and designation changes throughout the 1960s would eventually have I-79 follow a direct Erie-to-Washington, PA route, bypassing Pittsburgh to the West.

Meanwhile, West Virginia would receive two major cross-state interstates.  Interstate 77 - which would run along the West Virginia Turnpike north through Charleston and cross the Ohio River at Marietta, Ohio - and Interstate 64 - roughly following US 60 from White Sulphur Springs through Charleston and into Kentucky at Huntington.  The North Central part of the state - specifically along US 19 - was not programmed for any Interstate mileage.

In December 1957, the West Virginia State Road Commission petitioned for additional Interstate mileage along the US 19 corridor running from Morgantown south to Beckley. (1)  Fifteen months later in March 1959, West Virginia Governor Cecil H. Underwood organized a meeting with the Federal Highway Administration (FHWA) and politicians and transportation officials from Pennsylvania and West Virginia.

Underwood argued that an Interstate along the US 19 corridor would provide easy Interstate access to 70% of the state's population, enable direct connections to economic and industrial centers, and cut up to two hours of travel time between the two cities. (2)

Underwood and West Virginia's problem was that about 340 miles remained in the original 41,000 miles allocated for the Interstate Highway Program. (3)  Unfortunately, the I-79 extension had to compete with varying requests for 13,000 additional miles from nearly every state.

Without notice on October 18, 1961, West Virginia was awarded the Interstate 79 extension.  However, the surprise came when the new north-south highway would terminate at Charleston and not Beckley.  Unknown to many of the highway's prominent backers, the head of the State Road Commission, Burl A. Sawyers, had changed the routing of the I-79 extension on October 8th.  In the application, he also changed the corridor routing of Interstate 64.  Instead of running directly to Charleston near US 60, I-64 would now travel west from the Lewisburg area to Beckley. (4)

The change of the North-South highway's final alignment angered Beckley area politicians.  Many cried foul and pointed to politics. (5)  Sawyers said his change was influenced by two factors: 1) Interstates had to terminate at or near a city with over 50,000 in population.  Beckley's population in 1960 was around 18,500. 2) Mileage concerns.  With the length of the Morgantown-to-Beckley corridor around 175-180 miles, the concern was that it would eat up too much of the approximate 340 miles left in the system.  Sawyers said that he moved I-64 to Beckley and along I-77/WV Turnpike and moved I-79 to Charleston to squeeze in as much of the mileage that he could. (3)

Sawyer also noted that the BPR had suggested requesting an Interstate spur from Pennsylvania to US 50 in Clarksburg and then extending to Beckley if/when more Interstate mileage was added to the system.  He also could build the highway via a 50/50 match method vs. the 90/10 Interstate funding formula.

The decision to award West Virginia the I-79 extension also angered politicians nationally.  Politicians from Ohio, Iowa, and elsewhere claimed that the award was a political gift from the John F. Kennedy administration to the state for their support during the 1960 Democratic Presidential campaign. (6)

Upset with the decision, local leaders and residents in Beckley and Summersville protested the decision during a series of public meetings regarding Interstate 79 in late 1961.  With no success, they focused on other ways to build a Beckley to Sutton highway following US 19.  An application to the Area Redevelopment Administration for the "Industrial Highway" linking Beckley to Interstate 79 in Sutton was submitted in 1962. (7)  When the Appalachian Regional Commission and Appalachian Development Highways programs were created in 1965, the Sutton-to-Beckley highway would be included and known as "Corridor L".  The new highway would not be built to Interstate quality - most of it would be built as an expressway.  Further, the northern half, US 60 north to I-79 in Sutton, would be built as two lanes.

It's fascinating how one man's decision is pretty much responsible for how the highway system in West Virginia is laid out today.  If Interstate 79 did go to Beckley and Interstate 64 stayed along US 60 to Charleston, how different would things be?   North/South traffic wouldn't be much different - the 65-plus miles of US 19 from Sutton to Beckley would all be Interstate.

The Summersville traffic lights and speed trap would be gone.  Yet, would towns like Summersville, Fayetteville, and Oak Hill see the same amount of tourism dollars as they receive today?  The easier access -parking areas just off the highway - to recreation areas along today's current US 19 would not be possible on an Interstate.  How would the New River Gorge Bridge have been built?  Would the New River Gorge Area have been designated a National River, Recreation Area, and now a National Park if Interstate 79 went through vs. Corridor L?

If 64, 77, and 79 all would have converged in Beckley - how much population change would they have seen.  Beckley's population has slowly declined from 20,000 in 1980 to just over 17,000 in 2020.  Beckley would have been an intersection of the East Coast (and Port of Norfolk) and a direct line to the Midwest (Interstate 77) and Western Pennsylvania/Western New York (Interstate 79).  Beckley easily would be a distribution hub in modern times.

With Interstate 79 going to Beckley, would there be an ARC Corridor from Sutton to Charleston?  Corridor G (US 119) may have continued along the modern I-79 route out of Charleston.  Or if I-64 does move south to where it is today, would a corridor involving WV 39 and US 60 from Summersville to Charleston be possible?

Obviously, these are all what-ifs to something that never would happen after October 1961.  However, it is interesting how one change shaped Central West Virginia's highway network to what it is today.