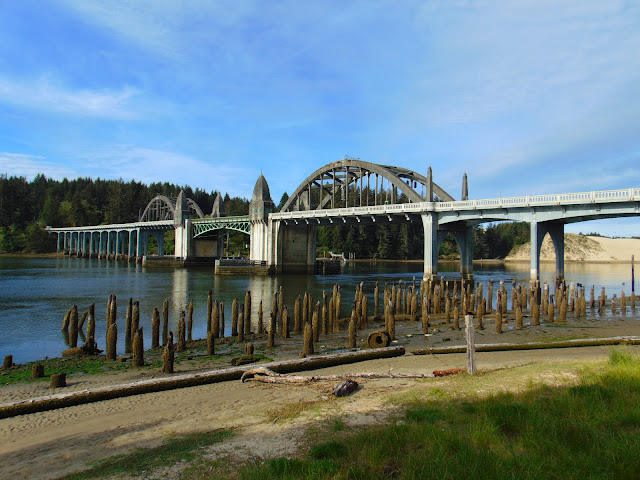 As the Oregon Coast Highway (US 101) was being completed across the State of Oregon during the 1930s, a number of bridges needed to be built to cross some of the state's finest rivers. In Florence, Oregon, the Siuslaw River Bridge was designed and constructed to help fill in the gaps between different coastal communities. Built in 1936, the Siuslaw River Bridge is a bascule bridge flanked by two reinforced concrete arches that spans across the Siuslaw River. The bridge and the river get their names from the Siuslaw tribal people who make their home along the river valleys of this part of the Oregon Coast. Today, the bridge provides a vital link connecting US 101 and the Central Oregon Coast to points north and south.

The total length of the Siuslaw River Bridge is 1,568 feet, stretching across the river. But more specifically, the bridge is made up of a north approach with eight spans of reinforced concrete deck girder totaling 478 feet in length. There is a main span in three parts, which includes a 140 foot long double leaf Chicago style bascule lift with single 154 foot reinforced concrete tied arch at each end of the bascule lift. Finally, there is a south approach with twelve spans of reinforced concrete deck girder totaling 646 feet in length. Staying true to the artistic touches that bridge engineer Conde McCullough liked to include in his bridge designs, there are four Art Deco style obelisks that house mechanical equipment as well as quarters and office space for the bridge operator were also included in the Siuslaw River Bridge's construction.

Designed by Oregon's State Bridge Engineer Conde B. McCullough, the Siuslaw River Bridge was built by the Mercer-Fraser Company of Eureka, California, and funded by the Federal Emergency Administration of Public Works (which was later renamed the Public Works Administration). With the New Deal programs that came about during the administration of President Franklin Delano Roosevelt’s New Deal Programs, such as the Civilian Conservation Corps (CCC) and the Public Works Administration (PWA), this helped to provide some of the jobs and lend some of the money construction so that the final gaps along the Oregon Coast Highway could be closed. With the funds secured, McCullough had the responsibility of designing, supervising, and finishing the construction of the five major bridges that were to span major bodies of water along the coast, including the Yaquina Bay Bridge in Newport and the Siuslaw River Bridge. With the inclusion of the funds provided for the Siuslaw River Bridge, the total cost of the bridge was $527,000.

Box Car Hill Campground said…
I would like to say this is a well-informed article as we have seen here. Your way of writing is very impressive and also it is a beneficial article for us. Thanks for sharing an article like this.Oregon Coast Coos Bay
10:55 AM