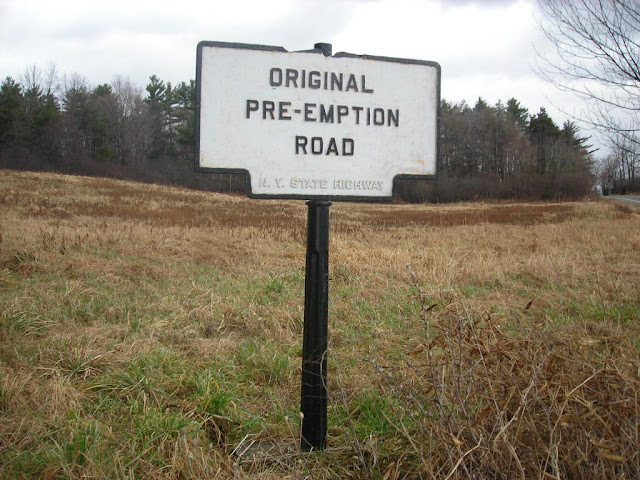 The Pre-Emption Road (or rather a series of roads named Pre-Emption Road) follows a survey line called the Pre-Emption Line, drawn in the early days of the United States. The story begins with Massachusetts and New York having competing land claims to modern day Western New York State that have their roots in colonial charters granted by the British. After the Revolutionary War ended, this land became the frontier of the nation and its settlement became a priority for the new American government. During this era, there were a lot of competing land claims that needed to be settled.

It was no different with the land claims between New York State and Massachusetts. On November 30, 1786, Massachusetts and New York sent representatives to Hartford, Connecticut to resolve their competing land claims. In less than three weeks, the representatives had reached a compromise. Massachusetts would receive pre-emption rights, meaning the right to sell the land after the Indian title had been cleared, while New York would own the land once it was sold. The representatives established the eastern boundary of the settled land, which became known as the Pre-Emption Line. In exchange for that concession, New York received clear title to 1.5 million acres to the east, which New York had promised its Revolutionary War soldiers the land as compensation.

Oliver Phelps, Nathaniel Gorham and their investors formed a company and bought the rights to the land from Massachusetts on credit. Their plan was to survey the acreage into towns of 36 square miles each, subdivide the towns into smaller lots, then sell the lots at a profit. The partners agreed to pay Massachusetts 300,000 pounds, about $1 million dollars for the right to purchase 6,000,000 acres. But they paid the Iroquois only $5,000 for 2.6 million acres of their land, about 18 cents an acre.

Phelps and Gorham hired Colonel Hugh Maxwell as their chief surveyor. Colonel Maxwell and his crew began a trial survey of the Pre-Emption Line in June 1788 and the formal survey in July. But the survey line veered to the west and Maxwell realized this when it was too late. He reached the vicinity of present day US 20 and NY 5 (Routes 5 and 20), about four miles west of Seneca Lake and wrote in his notes that "the general course for fifteen or sixteen miles is bearing west of north." Actually, the general course was bearing west of north from the very start of the survey at the Pennsylvania line. He was closer when he ran the formal survey in July 1788 but he still was not accurate, coming out at about the intersection of present-day US 20 and NY 5 and Pre-Emption Road. When he returned in 1789 for more survey work, Maxwell's notes show that he compensated for the variance between true and magnetic north.

The biggest immediate problem was the Preemption Line itself, as it was in the wrong place. It was supposed to start at a certain point on the Pennsylvania state line and proceed due north until it hit Lake Ontario, a little over 90 miles later. In fact, it started at the right place and angled a few degrees west of north until it crossed the steep ravines of the Keuka Lake Outlet and then angled even more sharply west for a short distance, then ran due north to hit the big lake about two miles west of where it should have. These deviations placed a land area of 85,000 acres, including the entire present day City of Geneva, in New York instead of Massachusetts.
Due to the surveying errors made by Colonel Maxwell, there were doubts that it was the true Pre-Emption Line. Phelps and Gorham expected to make Geneva their headquarters as it was already established as a trading post and was the chief seat for the entire Genesee Country, assuming Geneva was within their purchase tract. However, when they arrived, they found themselves unwelcome as it was already an outpost of the Leasee Company. Due to the surveying error, they were told they were wrong about its location, so they continued onward to establish their base of operations at Canandaigua and a second survey was ordered to clear up any issues regarding the true location of the Pre-Emption Line. During that time, the Phelps and Gorham investors were unable to meet their payments to Massachusetts after about two years and had to return the unsold land. Massachusetts then resold it to Robert Morris of Philadelphia, who at one time was the largest private landowner in America. Morris wanted the question of the Pre-emption Line resolved, so he commissioned a new survey in 1792. This second survey place the Pre-Emption Line on a true north course, crossing Seneca Lake and just east of Geneva, leading to true and false lines.


The Pre-Emption Line is said to be a line drawn due north from Washington, D.C., but it has shown that it was not the case. It was by pure chance that the Washington Meridian almost coincides with the original or false line. The Pre-Emption Roads were also said to have been designed as a projected road from Lake Ontario to Washington. There are a number of segments of Pre-Emption Roads both on the False and True Pre-Emption Lines, but no evidence of any plan to connect them. No evidences exists of a line or road south of the New York-Pennsylvania state border. The best known stretch of Pre-Emption Road is the 18 mile paved road south from Oaks Corners, in Ontario County, along the western edge of the present City of Geneva, crossing US 20 and NY 5 where the Lafayette Tree and the Lafayette Inn once stood. The Pre-Emption Road then went southward to Bellona, where it veers westward towards Penn Yan. Another 12 mile stretch is a gravel road north from the Mud Lake Road (Watkins-Tyrone Road) passing to the west of Dundee in Yates County. Both of these roads are on the false line. North of Geneva, there are vestiges of roads on both the true and false pre-emption lines in Ontario and Wayne Counties, but most of these roads are of a local and secondary nature. These roads were originally built along the lines to open up the territory for development.
The Pre-Emption Line can be identified in many locations. The marker for Milestone 82 which is 82 miles west from the west bank of the Delaware River along the 42nd parallel, is alongside Wedger Hill Road about four miles northwest of Millerton, Pennsylvania. The line runs northward along the present Chemung-Steuben County line, and on NY 352 between Big Flats and Corning, there are two stones. One stone has a bronze plate placed there by the Corning and Chemung Chapters of the Daughters of the American Revolution and the State Education Department, and the other looks like a surveying stone. Originally, the 1788 Pre-Emption Line was marked along its entire length by field stone markers, but road scrapers, bulldozers, farm tractors, and even souvenir hunters have eradicated most of them. The false line is unmarked until one reaches the Watkins Glen-Tyrone Road. The 46.5 miles of rural road are what remains of the 84 miles, 77 chains and 45 links of colonial history laid between the Pennsylvania state border to Sodus Bay on Lake Ontario. 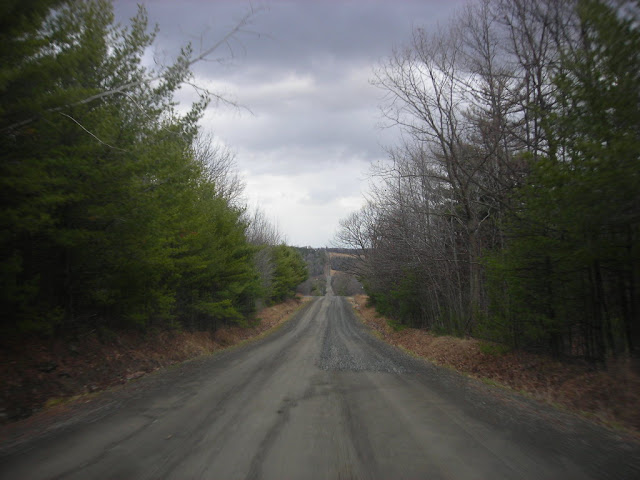 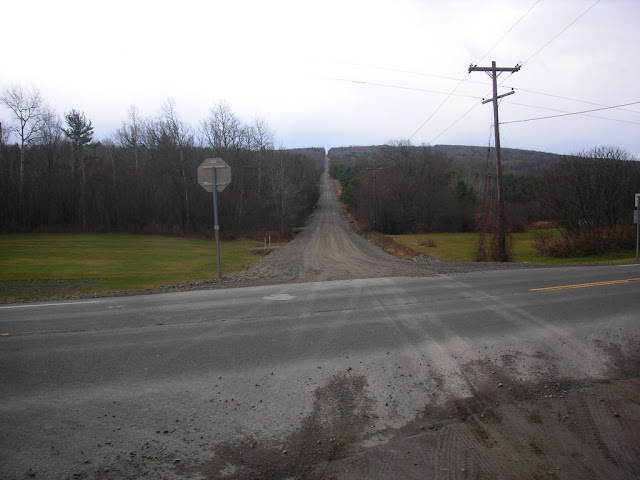 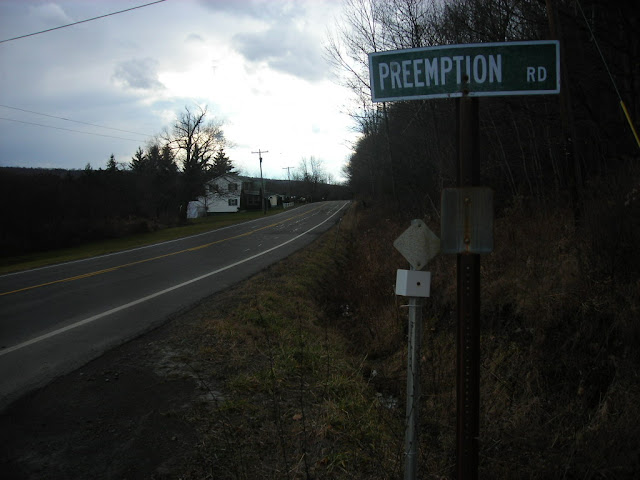 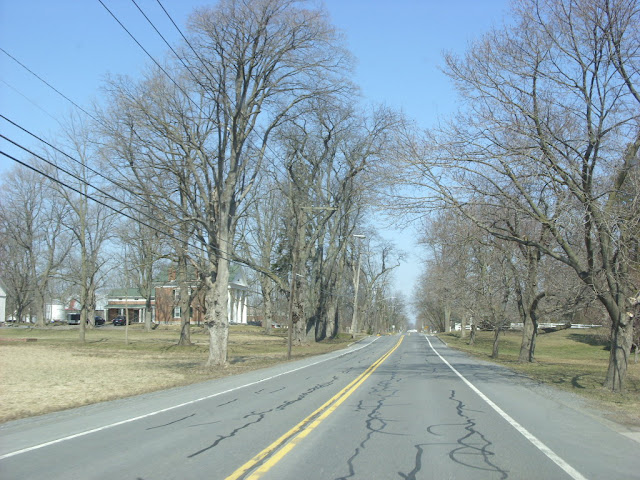