US Routes through Phoenix, AZ

By Challenger Tom September 13, 2018
When I was living in Phoenix I once tracked the path of all the US Route alignments that once existed through the City.  At the intersection of Van Buren Street and Grand Avenue pictured below four US Routes once met in downtown Phoenix; US 60, US 70, US 80, and US 89. 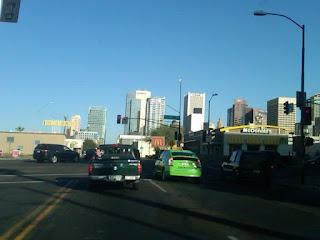 Even though Phoenix is mostly associates with US 60, US 70, US 80, and US 89 it hosted several other routes throughout it's history.  As originally planned the Bureau of Public Roads had US 80 meeting US 280 at the intersection of Van Buren Street and Grand Avenue.  US 280 was meant to travel north out of Phoenix via Grand Avenue through Prescott to US 66 in Ash Fork.  Ultimately the routing of US 280 was never signed and became US 89. The map below shows Bureau of Public Roads Map of US Routes systems in Arizona as originally planned.

US 80 was the only US Route through Phoenix that was routed as originally planned.  Heading eastward US 80 entered Phoenix on Buckeye Road.  At 17th Avenue US 80 turned north for a couple blocks and dipped over this 12'0 underpass still use today. 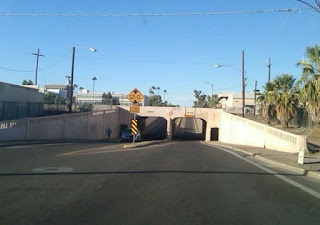 US 89 as stated above was planned US 280 along Grand Avenue to US 80 on Van Buren Street.  US 89 ultimately was signed south to the Mexican Border when signage of US Routes began.  Ultimately Grand Avenue would become the route of US 60, 70, and 89 between downtown Phoenix to downtown Wickenburg.  US 89 remained in Phoenix until it shifted north to Flagstaff in 1992 according to USends.com.

US 60 presently is the only US Route still active in Phoenix.  Today US 60 multiplexes I-10 into downtown Phoenix and slightly north on I-17 to Grand Avenue where it branches westward.  US 60 extended all the way to Los Angeles in 1932 which in turn routed it through Phoenix according to USends.com.

The building of US 60 in eastern Arizona through the Salt River Canyon took several years to complete.  On the 1935 State Highway Map US 60 can be seen following the original alignment of AZ 73 from Fort Apache to San Carlos where it met the original US 180.

By 1938 US 60 through Salt River Canyon had been completed and can be seen meeting US 70 in Globe which replaced US 180.

According to USends the routing of US 70 was extended to Los Angeles by 1934 but it doesn't appear on the 1935 Arizona State Highway Map.  US 70 existed through Phoenix until the late 1960s when the highway was eventually truncated to Globe by 1969.

Interestingly at one point AZ 93 was also routed through downtown Phoenix on Grand Avenue and Van Buren Street.  AZ 93 had a variation from US 89 in Mesa when it split south on AZ 87 onto it's own alignment which essentially became the routing of I-10 in the Gila River Reservation.  AZ 93 was an extension of US 93 that was routed through Phoenix in 1954 according to Arizonaroads.com.

Topographical maps show AZ 93 present in Phoenix as late as 1983 but I'm not clear on the date it was decomissioned.  This map from 1971 shows the alignment of US 60, 80, 89, and AZ 93 through the Phoenix area.  The map shows I-17 completed in the Phoenix area with some of I-10 east of downtown.  The AZ 360 freeway was ultimately built and became the modern alignment of US 60 through the eastern Valley.