By Challenger Tom September 07, 2018
After visiting Rockerville I continued northeast towards I-90 on US 16 and the US 16 Bypass Route of Rapid City.  I swung easterly on I-90/US Route 14 towards Badlands National Park and South Dakota State Route 240 (a former routing of SD 40 and US 16A) from I-90 exit 131. This blog serves as Part 8 in the 2016 Summer Mountain Trip Series.  Part 7 from Rockerville, SD and US 16 can be found here:

Badlands National Park consists of a series of eroded buttes and pinnacles which stands over the largest undisturbed grass prairie in the United States.  Badlands was set aside as a National Monument in 1929 before being elevated to a National Park in 1978.

Hiking trails in Badlands National Park are some lacking compared to most National Parks unless you can traverse the eroded buttes. 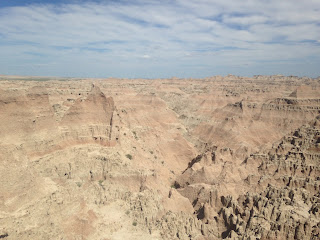 South of the Big Badlands Overlook SD 240 descends through Cedar Pass towards the White River watershed and follows a largely western course.  There is an overlook on the Cliff Shelf Nature Trail of the White River.  Below the Cliff shelf SD 240 passes by SD 377 and the Ben Reifel Visitor Center.

On it's westward trek SD 240 passes various overlooks of the surrounding landscape as it crosses into Pennington County.  I found most of the parking areas to make decent enough short trail heads.  The path of SD 240 and the Badlands Loop Road generally follows the terrain closely dipping in/out of the buttes in the process.

At Rim Road the routing of SD 240 swings northward again out of Badlands National Park and ends at I-90 in Wall.  The Park Boundary was oddly marked by a derelict goat starring down traffic. 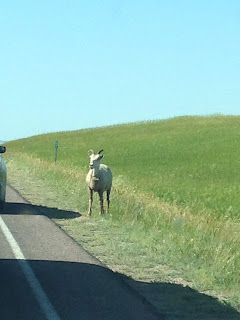 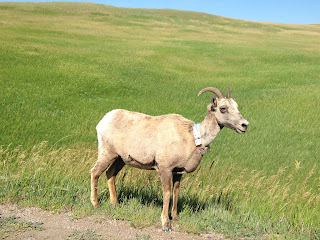 My understanding is that the Badlands Loop Road was upgraded completely to gravel by 1944 but I'm not uncertain when it was signed as US 16A.  US 16A was apparently replaced by SD 240 in 1980 when US 16 was truncated to Rapid City.

Part 9 of the 2016 Summer Mountain Trip Series can be found here:

2016 Summer Mountain Trip; US Route 14A in the Homestake Mining District and Spearfish Canyon