By Challenger Tom September 12, 2018
The photo below was taken back in 2012 from US Route 70 near Safford looking south towards the 10,724 foot Mount Graham near Safford in Graham County.  Mount Graham is the location of one of the few Arizona State Routes I never fully finished; AZ 366. 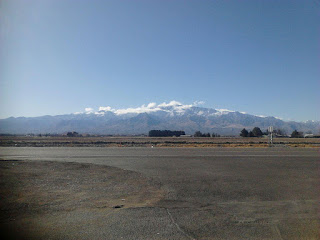 Arizona State Route 366 is a 28.33 mile state highway running west from US 191 in Swift Trail Junction to the Columbine Ranger Station of Coronado National Forest.  While AZ 366 doesn't technically go all the way to the summit of Mount Graham it does provide access to it via connecting National Forest Routes.  Approximately the first 22 western most miles of AZ 366 are paved while the remaining portion of the route is gravel.

AZ 366 was established as a State Highway in 1960.  The numbering convention of "366" comes from the connection the route had with US 666 which was eventually renumbered in Arizona to US 191.  Prior to the Interstates being built all Arizona State Routes had a number that was consecutive of a US Route.   Initially the routing of AZ 366 was reportedly only about 6 miles west from US 666 Swift Trail Junction but was quickly expanded to the modern 28.33 miles.  This 1961 Arizona State Highway Map shows the full routing of AZ 366 much as it appears today.

AZ 366 appears to be not much more than a maintenance swap between ADOT and Coronado National Forest.  The eventual routing of AZ 366 appears as "Swift Trail" on the 1956 Arizona State Highway Map.