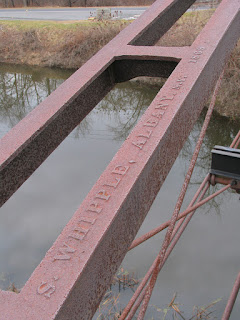 Squire Whipple is considered "the father of the iron truss bridge".  The civil-engineer's design for bowstring truss wrought and cast iron bridges revolutionized bridge building in the mid-19th century.  His 1847 book, "A Work on Bridge Building", is considered the "...first significant theoretical formula to calculate stresses in the articulated truss.' (1)

Most of Whipple's bridges were found along the Erie Canal as his bridge design replaced many older wooden structures.  Over time, Whipple's bridges could be found in single or multiple spans throughout Northeast and Midwest.

Four of Whipple's bowstring truss designs can be found in the Albany area of New York State.  The first was built and designed by Mr. Whipple and can be found off of Riverview Road in Vischer's Ferry.   The bridge was constructed in 1869 and crossed the enlarged Erie Canal at Sparkers.  Like many of the bridges built by Whipple or others using his design, this bridge was moved to Fonda in 1919.
Squire Whipple was a graduate of Union College in Schenectady.  The former Sprakers and Fonda bridge would later be restored by students, faculty and friends of the college under the direction of Dr. Frank Griggs, Jr.  The bridge was moved to cross a remnant of the old canal at Vischer's Ferry in 1998.

A second Whipple bridge sits not far to the south in Albany County.  Located off of NY 443, the Normanskill Farm Bridge is a Whipple Bowstring design that was built by Simon de Graff.  Throughout the 1800's, many bridge builders would slightly modify Whipple's design in order to avoid paying royalties and patent fees to Mr. Whipple. (2)

The bridge was constructed in 1867 and moved to its current location in 1899.  The bridge is originally thought to have come from Schoharie County but it is not 100% certain.  This bridge was moved in order to carry the Albany and Delaware Turnpike over the Normanskill.  Today, the bridge serves as a pedestrian bridge that is occasionally used by vehicles near the site of the former Stevens Farm.

A third Albany area Whipple designed bridge is located on the campus of Union College.  It is part of a pedestrian walkway near the Achilles Rink.  A fourth Whipple bridge, the Shaw Bridge in Claverack is located in Columbia County and will hopefully be restored and returned to use for pedestrian traffic.  The Shaw Bridge is a rare double span bowstring truss and was constructed in 1870.  It is believed to be the only remaining double span Whipple Bowstring Truss in the country.