Do You Know The Muffin Man?

By Doug August 09, 2017
It is true that every road has a story to tell. Some roads tell the story of blood, sweat and tears of hard working people building the Interstate Highway System, or the vast network of parkways around New York City. Other roads tell the stories of families crisscrossing the landscape to create a better life for themselves or a gateway to a fun vacation where discoveries are sure to be at every corner.

Speaking of vacation, picture it, London, 2014. I am walking to Trafalgar Square from where I was staying in Holborn for a day of sightseeing around London, passing through Covent Garden and Seven Dials on my way to catch a tourism bus. While discovering all these nooks and crannies, it should have been no surprise that I stumbled upon a sign for Drury Lane, and stumbled I did. Street signs in London tend to be either low to the ground or affixed to the corner of a building, much different than what I come across in the United States. 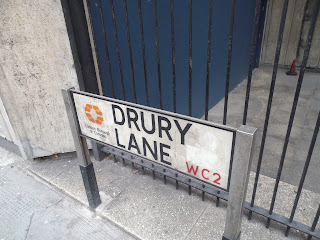 After I returned home to Upstate New York from my vacation to London and Ireland, I was going through the photos I took from the trip and decided to look up if this is the same Drury Lane that is mentioned in the popular children's song "The Muffin Man". The short answer is yes, this is the same Drury Lane that you learned to sing about as a child, whether it was in the English language or in the Dutch language.

Drury Lane in the first quarter of the 21st Century is a far cry from the Drury Lane that was mentioned when the Muffin Man was first written in 1820. Now a typical city street in London's Theatre District, Drury Lane was a bit of a red light district in the old days, as well as an area where poor Londoners resided. But poor Londoners have to eat too! So enter the Muffin Man, who baked cheap foodstuffs such as English muffins and sold them fresh to the local residents. How that translated into a catchy nursery rhyme is beyond me, but it is another shining example of the stories that the streets can tell.