By Challenger Tom August 03, 2017
In my previous post about CA 168 West I noted that Caltrans was working on a new roundabout in Prather.  The new roundabout is being built at the junction of CA 168 and Auberry Road which was a somewhat infamous local spot for traffic accidents.  As of yesterday it appears the roundabout is functionally open although far from complete. 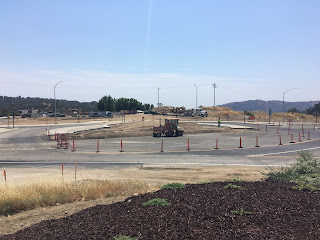 I ended up taking Auberry Road and Millerton Road west to Friant to back to San Joaquin Valley.  That put me at the foot of the Friant Dam which was opened in 1942. 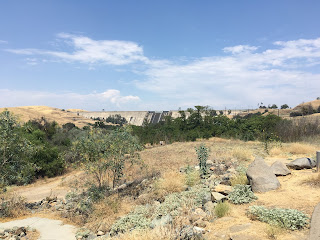 The Friant Dam impounds the San Joaquin River to create Millerton Lake which has a catchment area of about 1,600sq miles.  The Friant Dam was constructed between 1939 and 1942 by the Central Valley Project.  Today the Friant Dam is part of the Big Creek Hydroelectric Project and the lowest reservoir in the system.  The scope of Big Creek Project can be seen on this map:

What I find interesting about the Friant Dam project was that it flooded over the area that once the town of Millerton which was original Fresno County Seat from 1856 to 1874.  Millerton was located on the San Joaquin River and was part of the Stock-Los Angeles Road which largely used to the Sierra Foothills to avoid what was once marsh lands in the San Joaquin Valley.  Problems in Millerton began when the town flooded over in 1867 and was largely abandoned.  Eventually county voters moved to the Fresno County seat to Fresno proper which was the final nail in the coffin for Millerton.  Eventually Madera, Kings, Tulare, Inyo, Mono, and San Benito counties all split off from Fresno which is why the site of Millerton is now in Madera County.  There wasn't much left of Millerton when the 1930s and the Friant Dam project got going.  The Millerton Courthouse was preserved above the Friant Dam and still stands to this day. 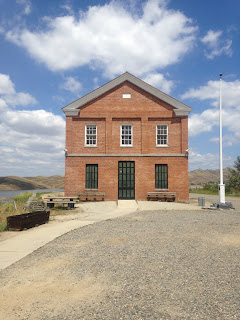 The alignment of the Stockton-Los Angeles Road largely followed the alignment of several state highways in San Joaquin Valley such as; CA 59, CA 140, CA 145, CA 180, and CA 65.