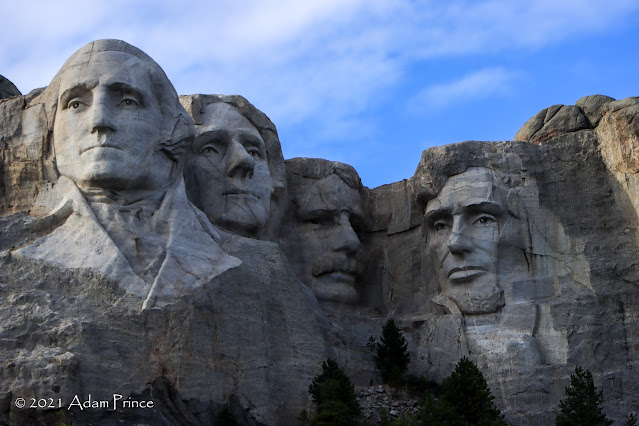 After a great day at Rocky Mountain National Park, it was time to go in a new direction - North - and into the Black Hills of South Dakota.

With it being offseason in the Black Hills, we ended up staying the night in Rapid City.  It made travel a lot easier. 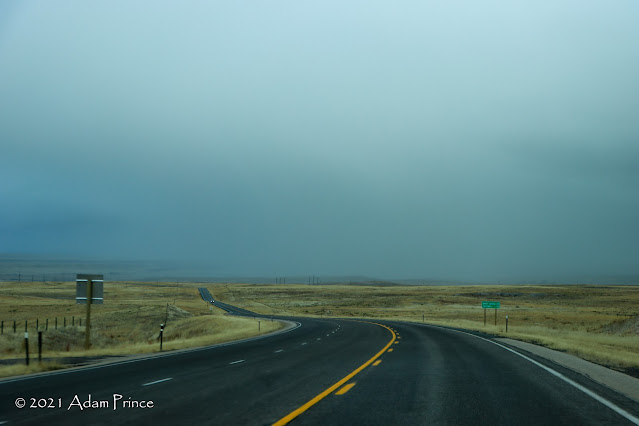 The night before, a cold front came through Cheyenne.  The wind gusts shook the old windows of the rental.  And in the morning, the drive north on US 85 was full of grey flannel skies with complimentary chilling drizzle.  I was surprised that there was more traffic than I expected on US 85 between I-25 and US 26 in Torrington.  Once beyond Torrington and Lingle, any vehicles on US 85 became nearly non-existent; and the weather improved. 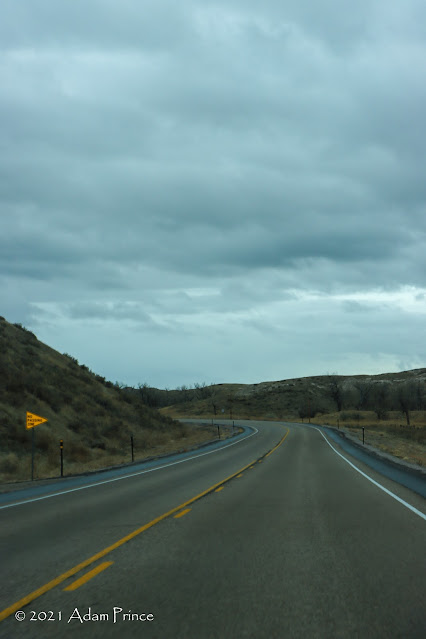 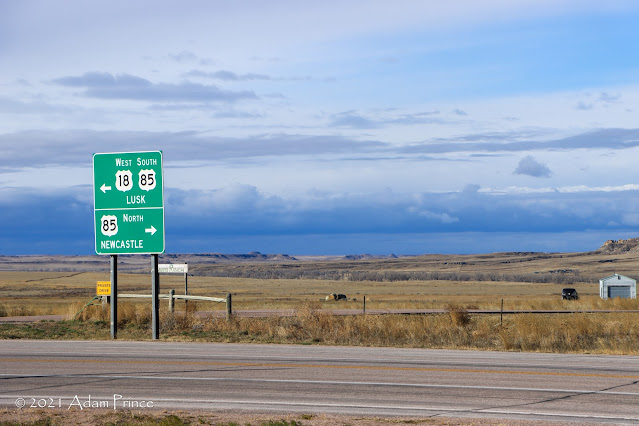 At Mule Creek Junction, it was a right turn onto US 18 and into South Dakota.  Here, the scenery continued as we entered the southern Black Hills. 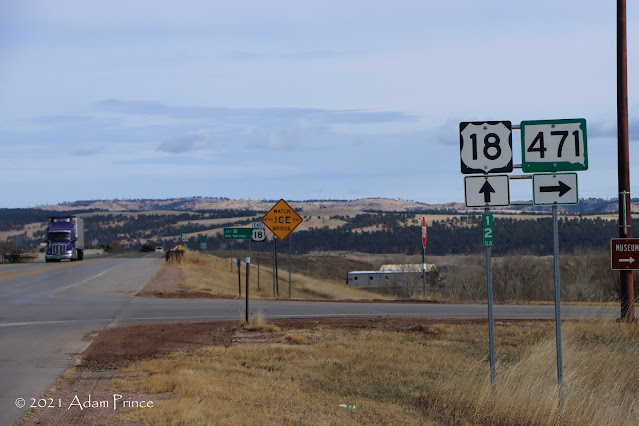 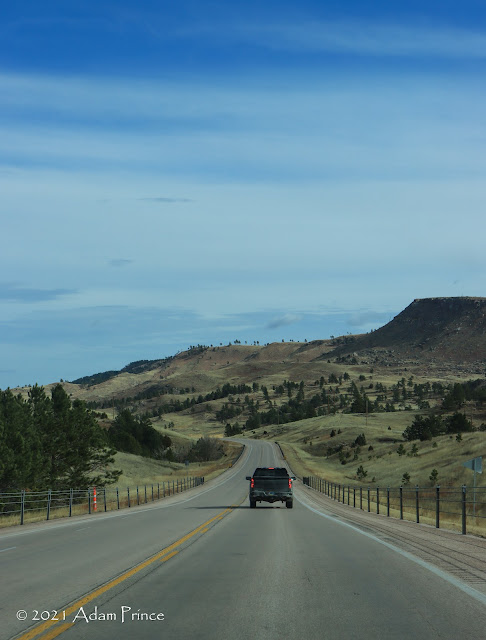 Our first stop was Wind Cave National Park.  Joe's ankle was still bothering him - so trekking into the cave was out.  While he checked out the Visitor's Center and its surroundings, I took the one-mile Prairie Vista loop trail for a hike. 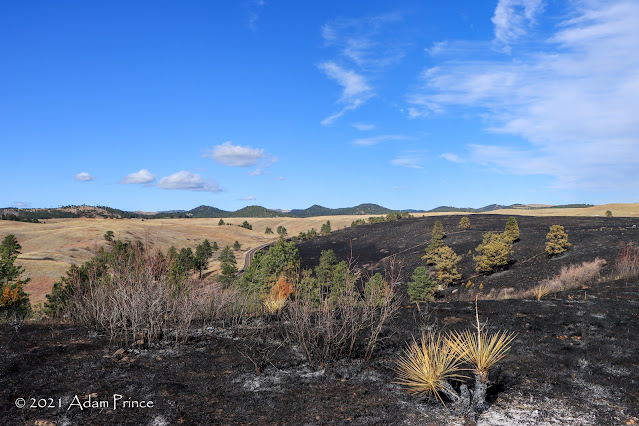 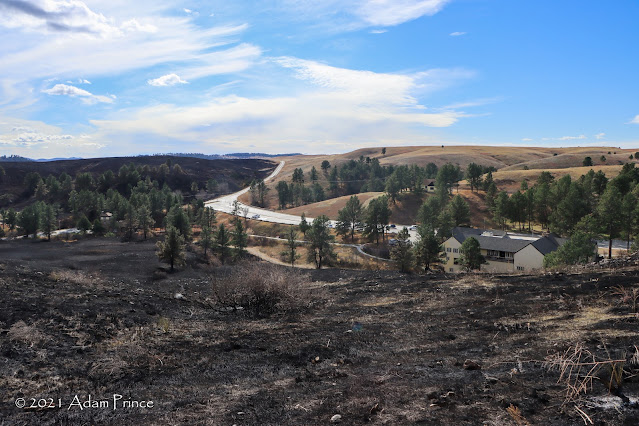 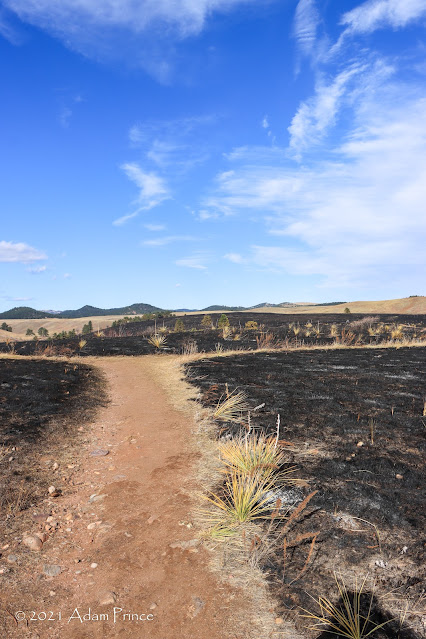 A recent controlled burn charred the landscape black; however, it made the backdrop for the hike unique. 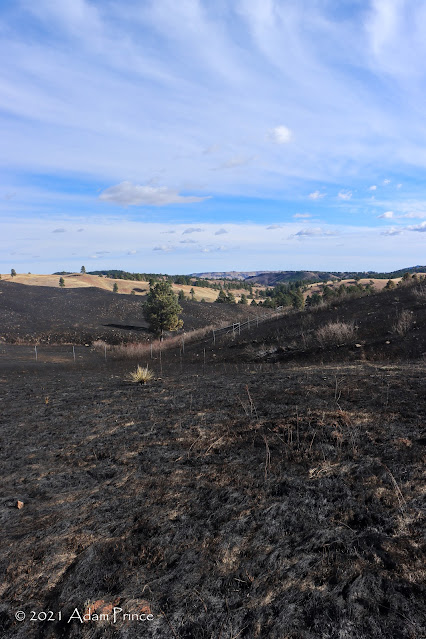 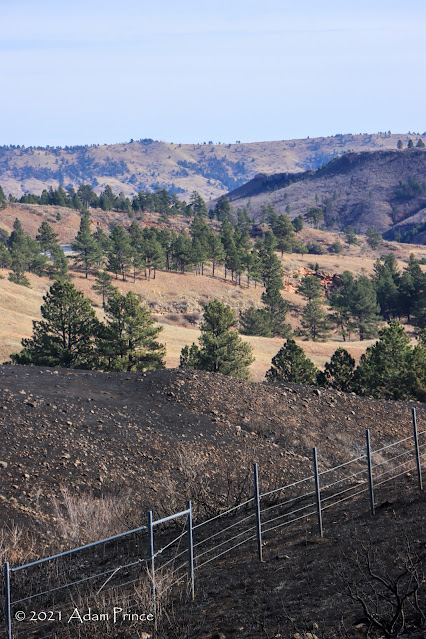 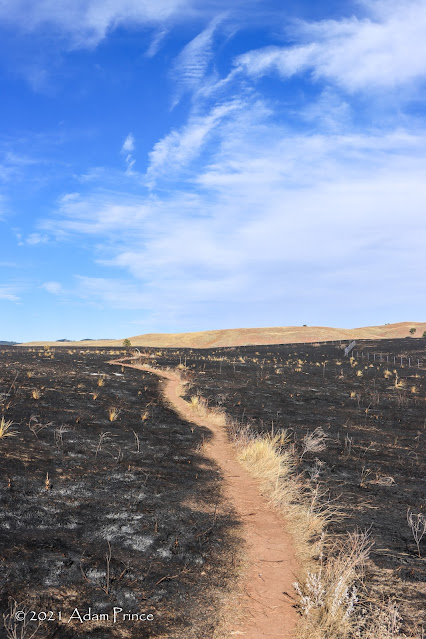 Since it was a Tuesday in early November, hardly anyone was at the park.  I had the whole loop and what felt like the entire prairie to myself.  There are over 30 miles of trails at Wind Cave National Park - I'd love to come back here again off-season and explore the trails.  The quiet open prairie is very soothing.

After the hike, it was time to take South Dakota Route 87 North through the northern part of the park and into Custer State Park.

Almost immediately, we found out why this is such a recommended drive.  Less than a quarter of a mile after turning onto the highway, a great view of the Beaver Creek Bridge awaits you.  This bridge opened to traffic in 1929 - and the open-spandrel concrete arch design fits the surroundings perfectly. 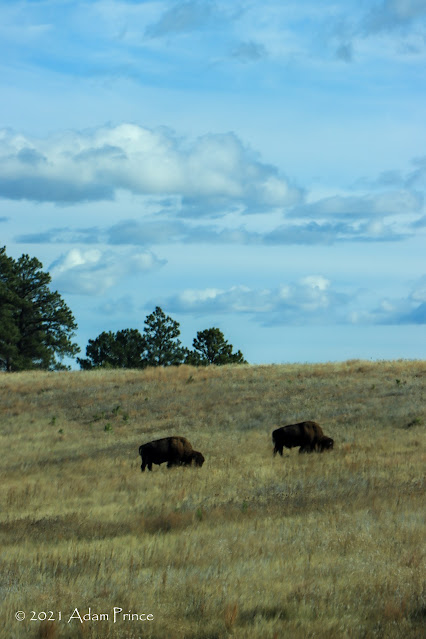 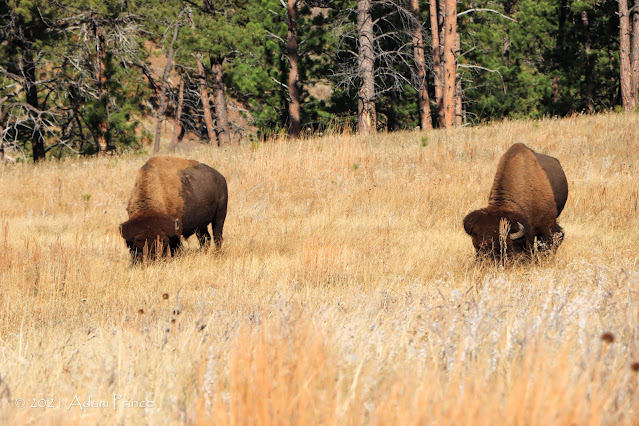 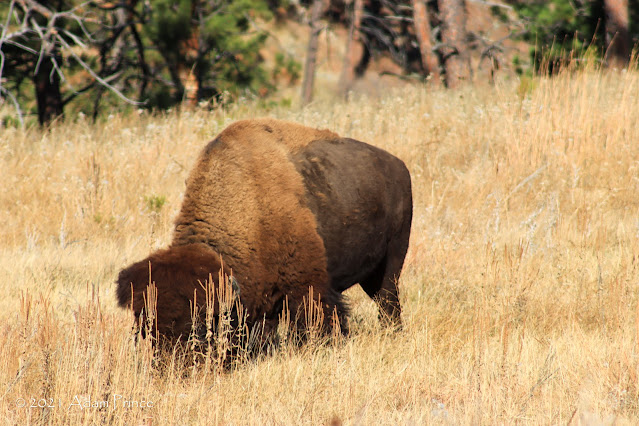 Immediately around the next bend was one of the highlights of the trip.  Two bison were grazing in the field - at most 150 feet from the road.  It was one of many up close and personal with wildlife experiences on this trip.  I quickly changed lens to my 75-300mm zoom lens to get as close of a shot as possible.  One thing from this trip that I learned was open wildlife photography is not easy.  A lot of practice is still needed.  So maybe another trip? 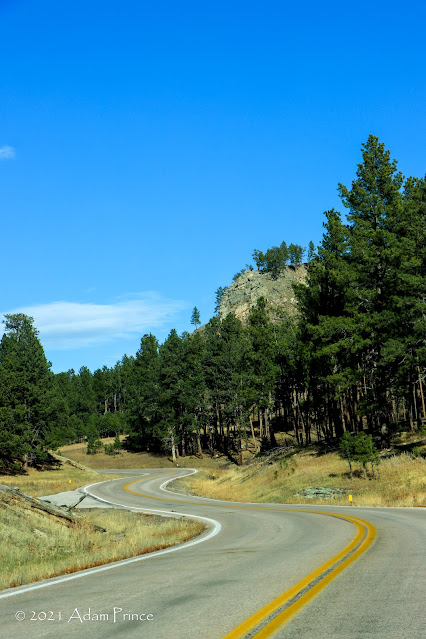 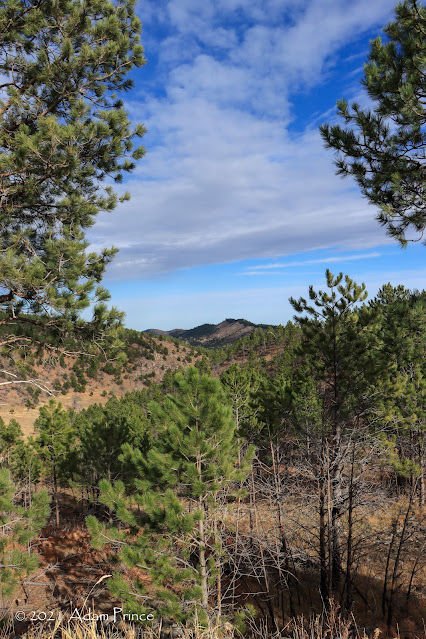 Highway 87 is an amazing drive with numerous opportunities to take photos - or simply ride and enjoy.  Prairie dogs are quite the common site within Wind Cave NP and Custer State Park.  Unfortunately, it appeared that highway work was occurring along the Wildlife Loop Route within Custer State Park.  So we were not able to take advantage of that opportunity to capture more wildlife.  That and we were down to about 50 or so miles on a tank of gas. 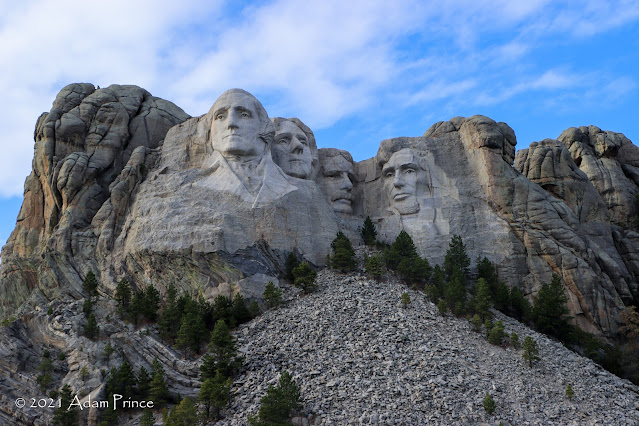 Mount Rushmore was not originally on the agenda for this day.  However, the decision to stay the night in nearby Rapid City allowed us more time and enabled us a chance to visit.  The first thing I noticed about Rushmore was the number of parking decks which were fortunately not full in mid-November.  The numerous parking decks are a great example of how busy the memorial is during the Summer months.

Rushmore is a sight to see - yet I found something else not on the memorial grounds that was more impressive.  On South Dakota 244, less than a half-mile west of the entrance to the memorial is the Profile Overlook.  This overlook showcases a side profile view of George Washington.  Washington seems closer here than it does from the straight-on vantage point at the memorial.  My shots of his profile are my favorites from Mount Rushmore.

Needles Highway and into Rapid City: 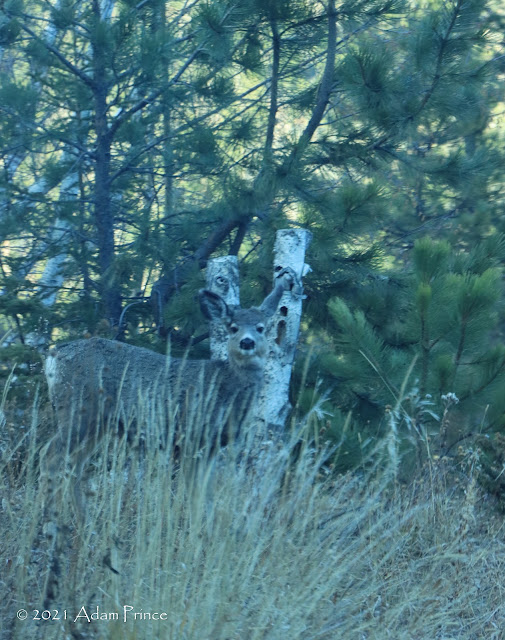 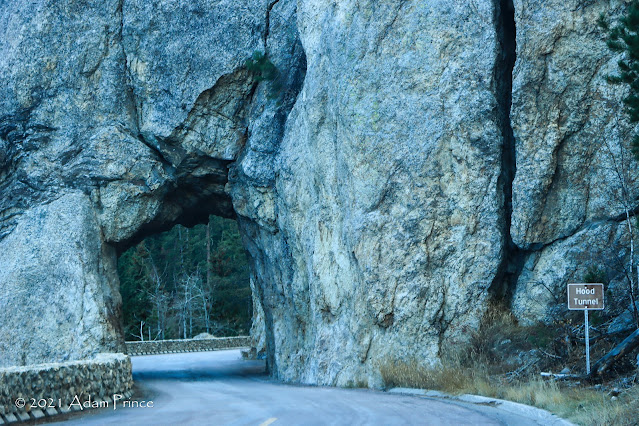 With still daylight remaining, we decided to drive as much of the other half of SD 87, known as the "Needles Highway," as possible.  The highway typically closes in early November - so we were not sure if the road was open or not.  We took the drive southbound.  We got as far as SD 89 at Sylvan Lake - where a sign read that the highway was closed.  With conflicting reports on if the highway south of Sylvan Lake was open or not, we decided to take SD 89 south to Custer and then work our way back to Rapid City.  Though we didn't drive the whole highway - and took it south versus north - we did get to see more wildlife, go through a one-lane rock tunnel, and see some great views.

If you want to see a lot more of SD 87/"Needles Highway" - Tom has you covered.

We got into Rapid City at close to sunset.  I could have taken some time to walk and take photos of the downtown area, but the wind and colder temperatures made me stay in for the night.  Day Five was a full day of driving, sightseeing, and great experiences.

Anonymous said…
I didn't see any information how treaties were broken, and the land was stolen from the Indians.
9:43 AM