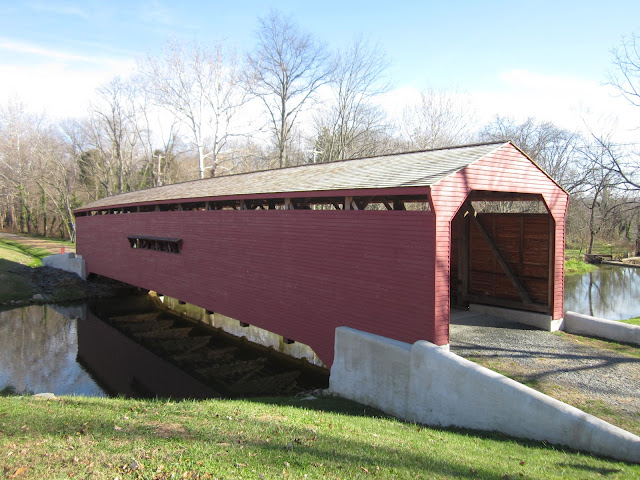 Located next to MD 272 just north of North East, Maryland, the Gilpin's Falls Covered Bridge in Cecil County was built in 1860 by Joseph G. Johnson at a cost of $2,000. One of two remaining covered bridges in Cecil County, the Gilpin's Falls Covered Bridge is a 119 foot long, Burr arch truss designed bridge and is the longest covered bridge that is still standing in the State of Maryland. It once carried horses, wagons and their riders to reach a flour mill located near the bridge.

A notice appeared in the The Cecil Whig on September 8, 1860 requesting bids for building a bridge over Northeast Creek at Gilpin's Falls of which the contract to build was awarded to Joseph Johnson. Although not confirmed, this could mean the bridge was likely completed sometime in very late December 1860, or early in 1861. While it just sits a few feet above the water, the strength of Gilpin's Falls Covered Bridge is evidenced by it surviving all of the various floods in northeast Maryland in Cecil and Harford counties during the middle to late 19th Century, while many other covered bridges and iron bridges were lost.

The Gilpin's Falls Covered Bridge was bypassed in 1936 by MD 272. Once bypassed, the old bridge was left neglected until the City of Salisbury, Maryland showed an interest to purchase the bridge and move it to a city park. Although Salisbury's effort failed, that inspired Cecil County to save the covered  bridge. After the bridge's roof collapsed from a heavy snowfall in 1958, the Historical Society of Cecil County and The State Roads Commission of Maryland decided to do a major rehabilitation of the bridge. As much of the wood stock as possible was used to repair the bridge in 1959 and a dedication ceremony was held in 1960. The Baltimore Sun reported in an article on November 11, 1959 that the repairs to the bridge cost $11,000. But an act of vandalism happened at the covered bridge in October 1971, when a group of thirteen people decided to kick out several boards. Then, on November 10, 1971, the west side of Gilpin's was damaged. 1971 was not a good year for the bridge! Cost of repairs was over $500.

By the late 1980s, the Gilpin's Falls Covered Bridge was again in need of repair. In 1986, the State of Maryland planned to widen MD 272 and considered moving the bridge to a different location. A local citizen organized the Gilpin's Falls Covered Bridge Committee and fought to keep the bridge at its current location and also started a fundraising campaign to restore the covered bridge. In 1989, the State of Maryland turned over ownership of Gilpin's Falls Covered Bridge to Cecil County and provided $50,000 for necessary repairs. Afterwards, a steel plate was installed to secure one of the beams, siding was replaced, two coats of paint were applied and the wingwalls and bridge abutments were rebuilt. The Cecil County Roads Department installed posts and chained fences at each portal entrance to keep out cyclists and three wheelers.

Even with the repairs that took place, the covered bridge still needed additional work, which was estimated to cost $200,000 in 1993. Then, in 1999, an insect analysis was performed on the bridge and showed damage done by beetles to the bridge's timbers. Meanwhile, the estimated cost for repairs rose to over $300,000. The Maryland Transit Authority agreed to award $260,000 towards bridge restoration provided that Cecil County helped with matching funds. However, Cecil County elected to not contribute and the bridge's future appeared to be uncertain. As time passed with nothing being done to save the bridge, the estimated cost for restoration grew again, this time to over $800,000. Money was continued to be raised for preservation efforts at the time. In 2004, Cecil County rejected all bids submitted for the rehabilitation process and in 2005, no bids were received. It would be just a matter of time that the bridge's future would be determined, for better or for worse.

In 2008, the Federal Highway Administration awarded a large grant for rebuilding Gilpin's Falls Covered Bridge under the National Historic Covered Bridge Preservation program. Additional grants arrived from the Maryland State Highway Administration and Maryland Historic Trust. These grants, along with private donations covered nearly all of the money needed, now determined to be $1.4 million. The National Society for The Preservation of Covered Bridges also donated $8,000 to fully fund the project. That donation was the largest single amount of money the National Society ever contributed to a covered bridge project, a testimony to the importance of rehabilitating Gilpin's Falls Covered Bridge. The National Society awarded the money on the condition that changes made to the covered bridge during the restoration process would be historically correct.

The Gilpin's Falls Covered Bridge gets its name from nearby Gilpin's Falls, which was named after Samuel Gilpin, who bought the nearby land in 1735 and used the power of the falls for his saw and corn mills. After Samuel Gilpin passed away in 1767, the mill remained in operation by the Gilpin family until the 1860s. Then, in 1895, William Warburton bought the area surrounding the falls and converted part of the mill site into a power plant. Warburton sold the area to the Conowingo Power Company in 1926, who then proceeded to shut down the plant and mills in 1930. There has not been much change to the property surrounding the falls and old mill since then, however, the mills are no longer there. Retaining ponds and the related race courses at the bottom of the falls are the only surviving parts of the former mills. If you look around that area, you will find structural foundations to barns, stone walls, and a spring house. At the top of the falls, there is another retaining pond that empties into a large pipe.

Gilpin’s Falls is created by the Northeast Creek, cascading 106 feet in a span of about 2,000 feet. The boulders found here are made of meta rhyolite and igneous rock, plus there is also crystalized volcanic material present in the area. Add in the covered bridge and the ruins of a former mill site and you have plenty to explore during your visit. You can access Gilpin’s Falls and Gilpin's Falls Covered Bridge in a few different ways. The main entrance is up by the covered bridge on MD 272, or you can hike down the nature trails located behind Cecil College. In all, this is a great place to visit and explore. 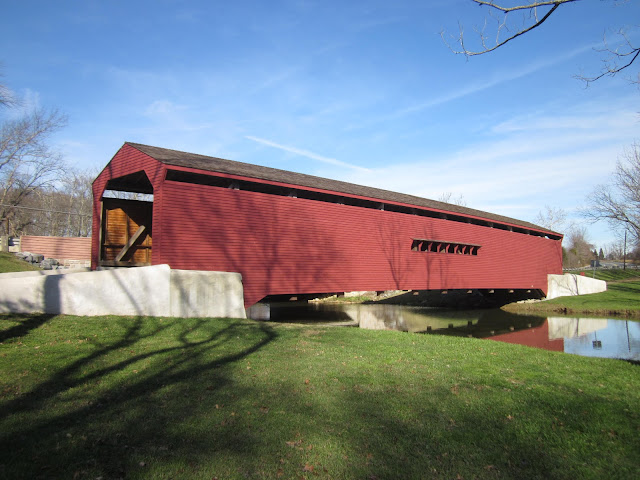 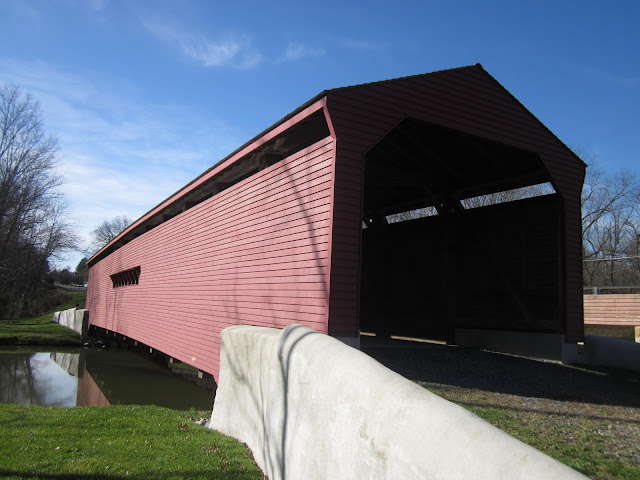 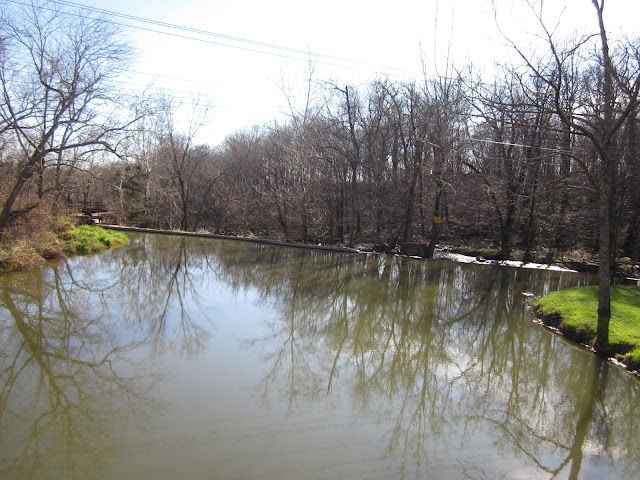 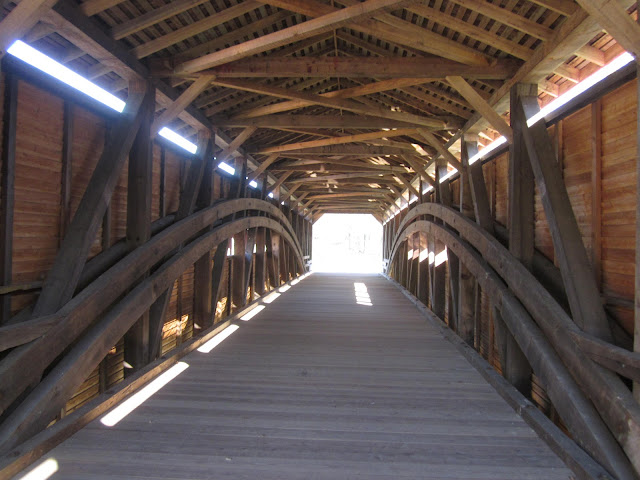 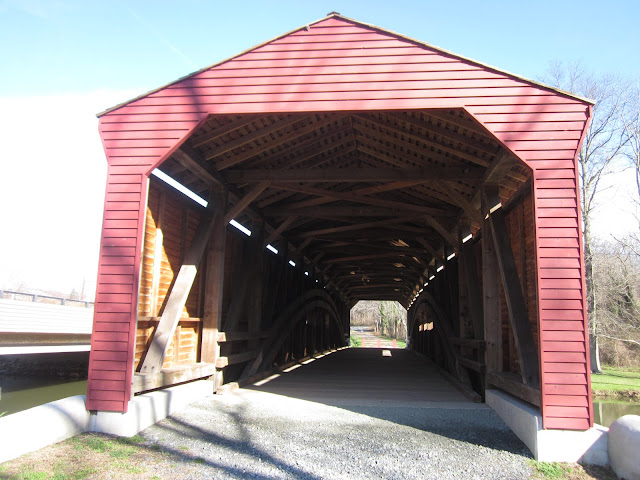 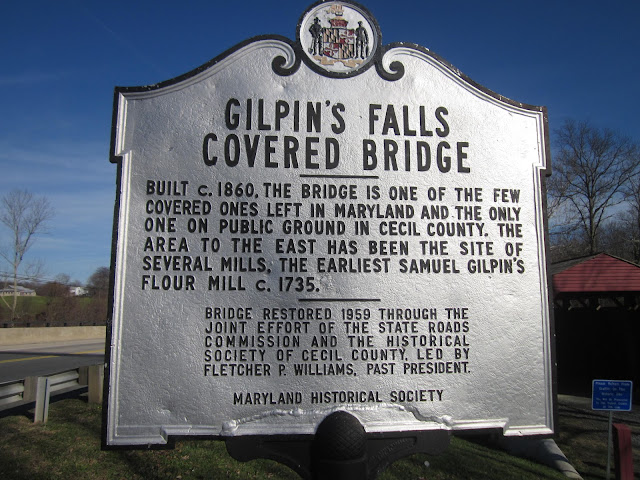