By Challenger Tom August 22, 2018
After completing South Dakota State Route 87 over the Needles Highway I briefly pulled onto US 16/385 and headed east on SD 244 towards Mount Rushmore. 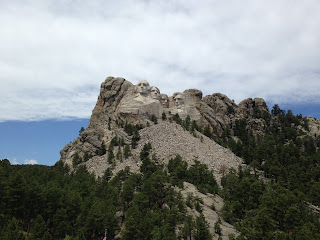 This blog post is the 6th in the 2016 Mountain Trip Series, Part 5 can be found here:

SD 244 is an approximately 10.5 mile east/west route between US 16/385 and US 16A which curves through the peaks of the Black Hills.  My understanding is that SD 244 was part of the most northern extent of SD 87 until 1977.  This seems to be backed up on historicaerials as a change from SD 87 is seen comparing the 1976 to 1983 topographical maps of the Mount Rushmore Area.  For what its worth a 1949 Shell South Dakota State Highway Map doesn't show the alignment of SD 244 under state maintenance and part of current SD 87 as US 85A.

Mount Rushmore National Memorial was in 1925 on the site of a granite rock formation known as the Six Grandfathers.  Previously the the site of the rock formation known as "The Needles" was considered for a National Memorial but was found to be too eroded.  Mount Rushmore was constructed out of the granite cliffs from 1927 through 1941 but not as originally designed.  Mount Rushmore features presidents; George Washington, Thomas Jefferson, Teddy Roosevelt, and Abraham Lincoln.  Originally Thomas Jefferson was meant to appear to the right of George Washington but the rock face was found to be unstable and was erased by blasting.  The figures were also meant to be carved to the waist line but funding was found to be insufficient.

Really my honest take on Mount Rushmore is that it is probably worth the 20-30 minutes to probably stop and see if you happen to be traveling in the Black Hills.  I personally found SD 87, Custer State Park, the Wind Cave, and all of US Route 14A to be a lot more fun than a tourist filled National Memorial. 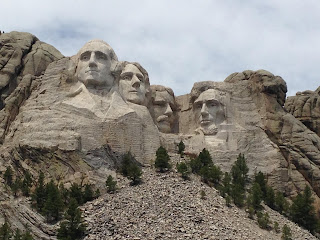