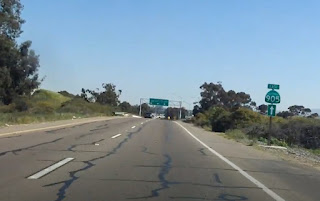 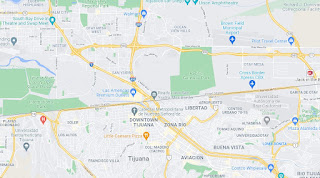 Thusly the planned corridor of LRN 281 appears for the first time on the 1960 Division of Highways Map. 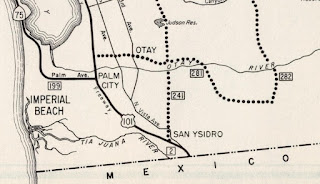 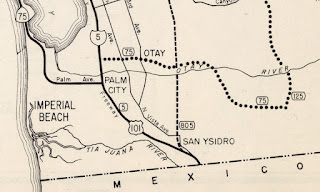 The adoption of 9.7 freeway miles of CA 75 between Interstate 5 and CA 125 was announced in the July/August 1965 California Highways & Public Works.  The CA 75 freeway followed the general corridor of Otay Mesa Road and Harvest Road from Interstate 5 towards to planned CA 125.  According to CAhighways.org the adoption of the freeway corridor of CA 75 between Interstate 5 and CA 125 was made by the California Highway Commission on June 29th, 1965. 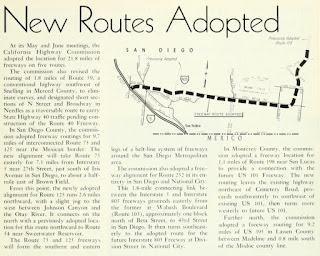 Thusly the adopted freeway alignment of CA 75 east of Interstate 5 first appears on the 1966 Division of Highways Map. 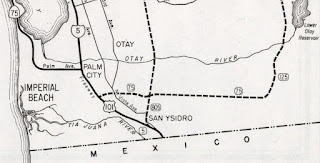 According to CAhighways.org the Division of Highways and San Diego County entered into a freeway agreement on January 2nd, 1969 to construct CA 75 from Interstate 5 to CA 125.  1972 Legislative Chapter 1216 created the second designation of CA 117 with the following definition:

"The international boundary near Borderfield northeasterly to Route 5"

The new designation of CA 117 can be seen for the first time on the 1975 Caltrans Map terminating at Interstate 5 and the planned CA 75 freeway. 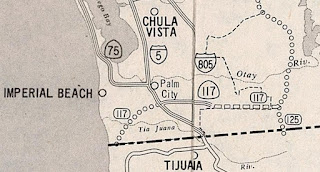 According to CAhighways.org the California Transportation Commission adopted a routing for CA 117 the Otay Mesa Port of Entry west to Harvest Road on March 24th, 1983.  This measure by proxy truncated unbuilt CA 125 from the Mexican Border to CA 117.  The extended definition of CA 117 appears on the 1986 Caltrans Map. 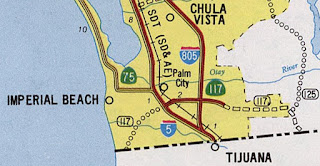 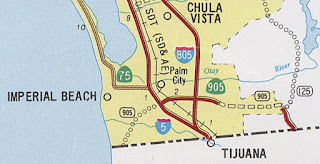 On October 28th, 2004 the California Transportation Commission adopted a planned freeway segment which would close the gap in the completed segments of CA 905 between Interstate 805 and CA 125.  CA 905 between Interstate 805 and CA 125 was completed/opened to traffic during late 2012.  Despite being completed east of Intestate 5 to the Otay Mesa Port of Entry there has not been any movement towards signing CA 905 as Interstate 905.  There is presently no active plans to construct CA 905 west from Interstate 5 to the Mexican Border.

Below the entirety of existing CA 905 eastbound can be viewed on the Roadwaywiz Youtube Channel:

Below the entirety of existing CA 905 westbound can be viewed on the Roadwaywiz Youtube Channel: