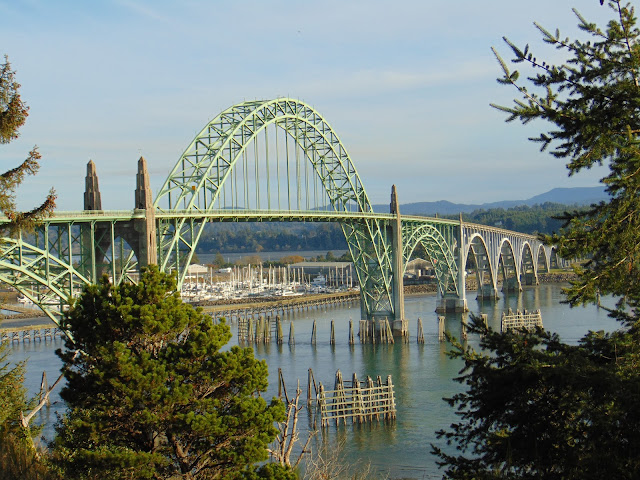 Nicknamed the "Green Lady", the Yaquina Bay Bridge is one of the most recognizable bridges on the West Coast of the United States. It is certainly one of the best known bridges along US 101, falling somewhere on the list after the Golden Gate Bridge in San Francisco. The image of the Yaquina Bay Bridge adorns everything from international travel magazines and business logos to the sleeve patches worn by the police force in Newport, Oregon. The bridge is admired by photographers and enjoyed by visitors to Newport, some of who take the time to walk the length of the bridge. The Yaquina Bay Bridge has a number of vantage points of which it can be seen, including at the adjacent Yaquina Bay Lighthouse property. The north staircase is an interesting spot, and a particularly picturesque viewpoint is at the marina in downtown Newport, with boats at the docks and the bridge pictured as a silhouette against a spectacular sunset.

The Yaquina Bay Bridge is part of the US 101 routing of the Oregon Coast Highway, as it crosses over the Yaquina Bay in Newport. One of five major Oregon Coast bridges designed by famed engineer Conde B. McCullough and one of his finest works, construction began on August 1, 1934 and the bridge was opened on September 6, 1936 at a cost of $1.3 million, two months before construction was complete. As automobile travel had become more popular along improved roads along the Oregon Coast and out towards more interior regions of Oregon, the Yaquina Bay Bridge was the last of the five to be completed which were designed to eliminate ferries along the Oregon's coastal highways. McCullough himself once referred to the collection of the Oregon Coast bridges as "jeweled clasps in a wonderful string of matched pearls."

The bridge is a combination of both steel and concrete arches, painted in that ever durable ODOT Green color that matches well with the surrounding landscape and holds up well to Oregon's climate. The main span of the 3,223 foot long bridge features a 600 foot steel through arch flanked by two 350 foot steel deck arches, with the crown of the arch on the main span perched at 246 feet above sea level. On the south end of the steel arch part of the bridge, five reinforced concrete deck arch secondary spans  and fifteen concrete deck girder approach spans can be found. The bridge features a number of decorative elements, which is a testament to Conde B. McCullough's vision that bridges should be beautiful as well as function. Those decorative elements include ornamental spandrel deck railing brackets, fluted entrance pylons, and a pedestrian plaza with elaborate stairways leading to observation areas. These facets wrapped in an art deco package make the Yaquina Bay Bridge one gorgeous sight to be seen.

While the Yaquina Bay Bridge is graceful, a number of projects have been undertaken to increase the bridge's longevity, even as traffic counts go up on US 101 in Newport. The bridge retains good historic integrity and was added to the National Register of Historic Place in 2005. However, it should be noted that the steel railings on the steel spans are not original to the bridge and concrete railings matching the ones seen on the concrete arch spans were replaced in 1981. In addition to the ODOT Green paint that protects the steel from the coast’s battering weather, cathotic protection is also used on the bridge. The idea behind cathotic protection is that it turns the bridge into one giant electrochemical cell. A coating of zinc turns the concrete into the cell’s cathode, with installation of a direct-current power supply acting as the anode. The DC current forces salt ions toward the zinc and away from the rebar. It keeps the rebar in an electrochemical state that doesn’t want to corrode. The first North American use of cathotic protection was, in fact, employed more than two decades ago on the Yaquina Bay Bridge’s northern approach on US 101.
But for all that adoration the iconic Yaquina Bay Bridge receives, and for all the work that the Oregon Department of Transportation puts into maintaining the bridge, there is also the growing concern that with the bridge’s 100th anniversary on the horizon in 2036, the bridge is not going to last forever. The combined tsunami of a brutal coastal climate, the increasing daily use, existing weight limitations and the harrowing prospect of a major earthquake pulverizing the unreinforced bridge already are exacting a toll. Oregon officials put the replacement cost of the bridge at more than $200 million, but the prospect remains the real cost of replacement could easily be $600 million to $800 million. Currently, there is no formal plan to replace the Yaquina Bay Bridge, and the Oregon Department of Transportation believes that the Yaquina Bay Bridge could easily see its 100th anniversary with the maintenance that has been put into keeping the Yaquina Bay Bridge in shape.

For all the places I have traveled in the world, and living near some great bridges, the Yaquina Bay Bridge happens to be one of my favorite bridges on the planet. Its graceful arches set along the Oregon Coast landscape makes the bridge that more attractive to the eye. I tend to think that others agree, as it has become synonymous as an enduring symbol for Newport and one of the things everybody wants to photograph while in town.