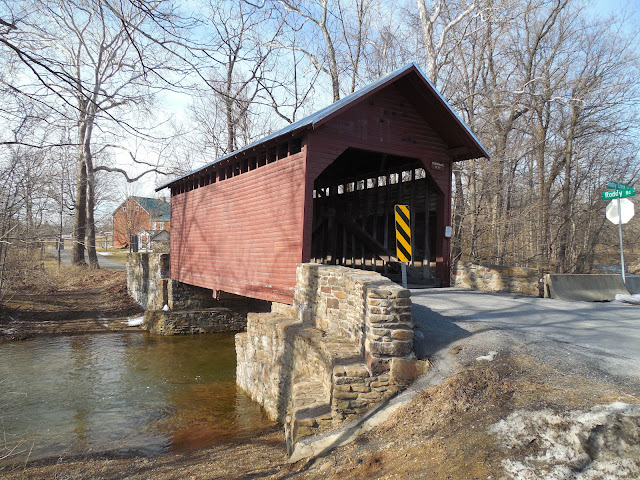 While the usual wear and tear over the years plus damage from over height vehicles seem to tell the tale of this bridge, it is a commonly held belief that Confederate General J.E.B. Stuart and his cavalry crossed the Roddy Road Covered Bridge on July 5, 1863 during the Gettysburg campaign of the Civil War. There are no records indicating any battles took place at or near the bridge. That is probably the most exciting event to happen relating the Roddy Road Covered Bridge.

Steel beams were added under the bridges flooring for support during the early 1930s and were twice replaced due to corrosion. Steel beams were first replaced during the a rehabilitation project in 1979 and 1980. Unfortunately, errors were made while repairing the bridge by setting the four corner posts in concrete, resulting in trapped moisture at the base of the posts and the end of the bottom chords causing the wood to rot. In March 1992, an oversized truck damaged the bridge roof and truss, closing the bridge to traffic. Repairs were done through the help and effort of many volunteers and the bridge was able to reopen in October of the same year.

In 2011, the National Historic Covered Bridge Preservation Program awarded a $176,400 grant to Frederick County for repairs to Utica Mills, Roddy Road and Loys Station Covered Bridges. Frederick County kicked in another $44,100 to bring the total funding amount to $220,500. The contract to repair the bridges was awarded to Kingsley Construction, Inc. Work began to rehabilitate Roddy Road Bridge in June 2015 and this work included installing interior fire retardant, an exterior paint job using red paint, a fire alarm system in case of mischievous arsonists, timber guard rail along Roddy Creek Road, and toe wall for scour protection at the north abutment of the bridge.

However, the repairs to the bridge were short lived, as an oversized truck damaged Roddy Road Bridge on May 18, 2016. While damage to the portal boards were quickly repaired, another oversized truck heavily damaged the bridge just one month later on June 16, 2016. This time the damage was extensive. Talk about bad luck! In addition to ripping off the portal board and breaking roof braces, a lot of the wood was twisted from the damage caused by the truck. The bridge was dismantled in October 2016 to examine the heavy timber pieces for possible reuse in reconstruction of the covered bridge. It was determined the timber was not reusable so all new timber was used to rebuild a replica covered bridge. Construction of the new Roddy Road Bridge was completed in April 2017 by Heavy Timber Construction of Frederick, Maryland.
In addition to a completely new Roddy Road Covered Bridge, Roddy Creek Road was redirected to make it safer to enter the bridge from the north end, a new park was built that includes restrooms, playground, a short walking trail and a parking lot. Bars were also placed at both ends of the bridge to help prevent oversized trucks from entering the bridge, thus ensuring the health and longevity of the covered bridge for years to come.
Pictures show in this article are from March 2015, so they are of the original Roddy Road Covered Bridge. 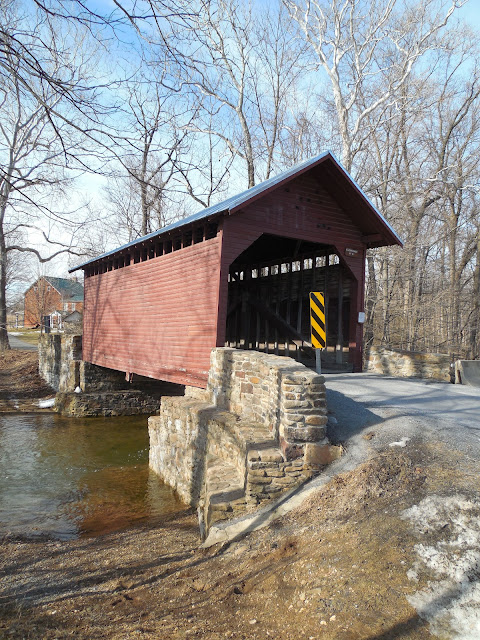 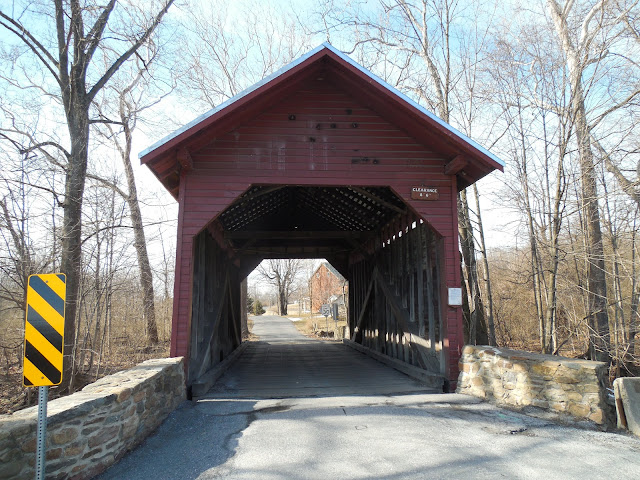