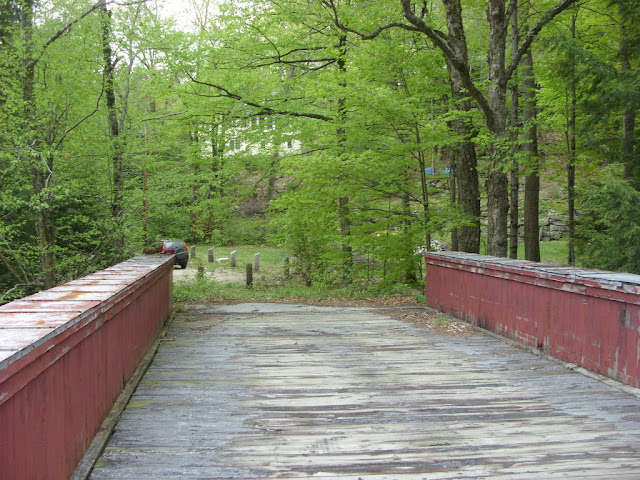 The Russell Hill Bridge (also known as the Livermore Bridge) in Wilton, New Hampshire is almost certainly one of its kind. This bridge is the only known example of a timber, half through, pony lattice truss in New Hampshire and possibly in all of North America. Visible as you pass by on NH 101 west of Wilton, the wooden boxed pony truss bridge of a Town lattice design spans over Blood Brook on an old alignment of Russell Hill Road.

It could be say that the wooden box design of this pony truss bridge was to weatherize the bridge. Plus, with the large number of covered bridges in New Hampshire, it was natural to use wood and timber in bridge construction. However, since the bridge is still open, it was still subject to the elements of nature, which may be the reason why there are not many examples left, and why the Russell Hill Bridge is a lone surviving example of this bridge design.

Built in 1937, the 52 foot long Russell Hill Bridge is not the first bridge to be located at this spot. There is evidence which suggests that there was a bridge at this location as far back as the middle of the 18th Century. However, by the middle of the 19th Century, that bridge was washed out and was replaced with a boxed pony truss style wooden bridge, similar in structure and scope to a covered bridge. The bridge's location was near a sawmill and dam just upstream on Blood Brook, with the original builder of the sawmill being Reverend Jonathan Livermore, which is where the bridge's alternative namesake comes from. This was also the site of a crossroads from the days of yore between Wilton Center to the east, New Ipswich to the south and Greenville to the southwest.

By 1937, it was time to rebuild the bridge. Fred Tuttle and Nehe Pajanen were paid $3278.11 and $224.05 for labor and materials to construct a new bridge over Blood Brook. Fred Tuttle was an experienced carpenter with a portfolio of having built many homes in New Hampshire, but the extent of his bridge building experience is unknown. Construction for the Russell Hill Bridge used new materials, but followed the design of the the bridge built in the 19th Century. At the time, there were other examples of wooden boxed pony truss bridges to follow, as the Boston and Maine Railroad used this design for a few of their bridges in New Hampshire. But, further research may show that this bridge is a rare survivor of a once common type or a rare survivor of a rare variant of a common type of bridge.

While the Russell Hill Bridge has been bypassed in favor of a modern bridge downstream and to the east, the bridge remains as a testament to New Hampshire's bridge construction history. The Russell Hill Bridge can be visited today, whether you park alongside NH 101 (but be careful) or follow the old alignment of Russell Hill Road to its end. Or you can virtually visit with the photos shown below.