By Challenger Tom December 07, 2017
This week for Throwback Thursday I'm looking back at Arizona State Route 179. 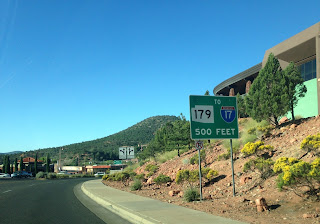 AZ 179 is a 14.5 north/south route running from I-17 to AZ 89A (former US 89A) in Sedona.  Parts of AZ 179 were designated in 2006 as the Red Rock Scenic By which is an All American Byway.  While I certainly favored AZ 89A due to it's much more historic status, AZ 179 certainly has a ton of merit as a scenic drive as it traverses the red rock bluffs of greater Sedona.

I don't know the exact date of when AZ 179 was created as a state route.  However, I do know the roadway is tied to AZ 79 being extended to Flagastaff via the modern alignment of I-17 which was between 1956 to 1961.

My first encounter with the Sedona Area was after my 16th birthday back in 1999 when I was still living in Michigan towards the end of high school.  I went out to Phoenix with my Mom and Sister to visit my older brother.  My brother had been living out in the Phoenix Area since 1993 and was really familiar with the northern parts of Arizona.  I had received my driver's license earlier in the year and that being the case I rented a pair of ATVs with my brother which we took a wash somewhere near the New River north of Phoenix.  Somehow I managed to flip my ATV at about 35-40 MPH which sent me flying down wash.  Somehow the ATV landed on me which led an ankle strain and likely a concussion given my helmet had a crack in it.

The next day after the ATV accident my Dad was supposed to fly into Phoenix and we were supposed to take a family trip north to Sedona and Jerome.  Needless to say I wasn't much in much shape to leave my brother's house but given that I was having a good time being in Arizona for the first time I went along anyways.  The first stop in the northern end of the state was up AZ 179 north to Sedona which was just a normal two-lane road highway at the time.  My family walked through downtown Sedona and saw a lot of the tourist sites among the red rocks.  After leaving Sedona we took AZ 89A south through the mining town of Jerome to Prescott.  Needless to say after getting my fill of the desert, Mogollon Rim County, the mines of Jerome, and really everything else I was sold on bailing on Michigan for Arizona when I graduated high school.

I eventually did make good on moving to Arizona in the summer of 2001.  Less than a month after graduating high school I bailed out of Michigan and drove across the county with my Dad in three days with my truck.  On occasion I would stop in Sedona over the years for various reasons given how close of it was to the Phoenix Area.

I want to say that ADOT constructed the roundabouts present on AZ 179 sometime in 2010 or 2011.  I only know a rough estimate of the time table due to a family visit where we went up to Sedona via AZ 179 when the roundabouts were being constructed.  In 2011 I picked up Sedona in my work district and my first official trip up was late in the year during the winter.  I snagged a photo of one of the newly built roundabouts on the southern outskirts of the city

One of my earliest attempts at creating a road album was in 2012 along AZ 179.  I was essentially trying to show off a place I worked up in the mountains for a couple friends and took a bunch of photos going south from AZ 89A to I-17.  Really in retrospect I missed almost all the good stuff that I think goes into a worthwhile like signage, end points, or even the village of Oak Creek in the middle of AZ 179. 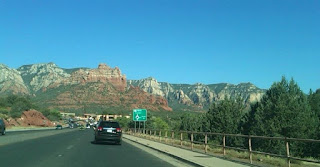 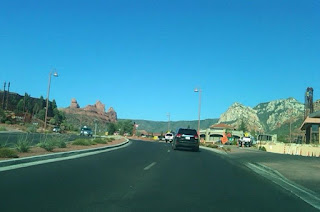 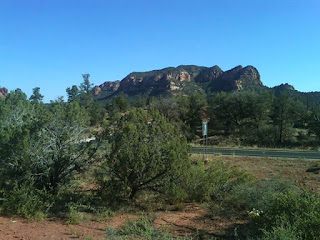 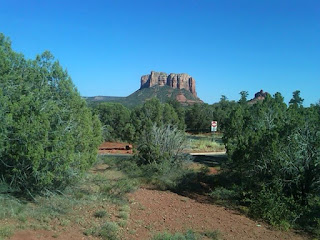 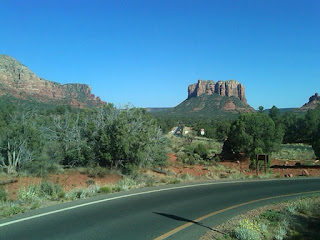 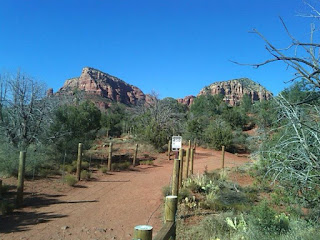 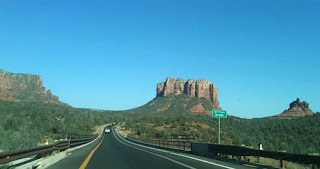 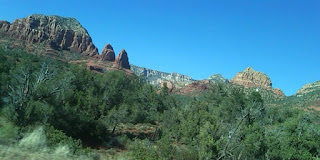 I should mention that before AZ 179 was reconfigured it was a really dangerous road.  Bike traffic was heavy but it was essentially forced into the lanes with cars.  The traffic lights were an incredible pain in the ass to get through, I recall the back ups in Oak Creek as being especially long.  The roundabouts certainly helped keep traffic moving on AZ 179 although I've found the speed limit to often to be excessively slow in the 35 MPH posted range.  In addition to the roundabouts South/North traffic on AZ 179 was largely divided and there was even nice wide bike traffic lanes installed along the duration of the highway.  Really AZ 260 and AZ 89A are really the way to go if you want to get into Sedona fast but I'd say AZ 179 is the place to go if you have a bike or want to hike some trails.