By Bob Malme December 30, 2017
The end of another year, and quite an eventful one for followers of the progress in building I-73 and I-74 (and other new interstates) in North Carolina. A summary of what happened:

It was quite a banner year for I-73, or should I say a removal of banner year, since by the end of 2017, for the first time in the routes existence, there was no section signed as Future I-73. 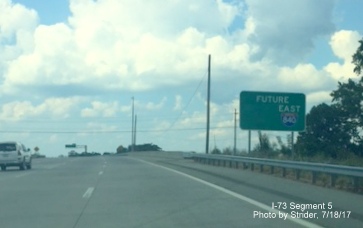 Two segments of the route north of Greensboro were completed adding 12 miles, or about 15%, to the route's total mileage. First was the I-73 Connector from the Bryan Blvd. at the PTI Airport to NC 68 construction which included a new taxiway bridge over I-73. 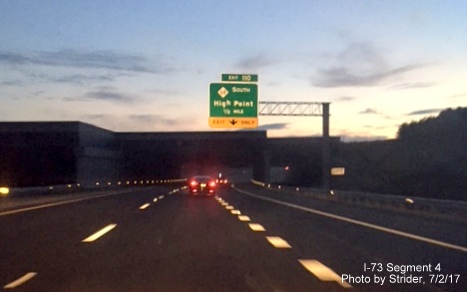 I-73 Connector north lanes about to go under Airport Taxiway bridge in Greensboro.

The new I-73 roadway crosses over NC 68 then crosses back with 2 separate exits for Greensboro/High Point and Oak Ridge traffic. 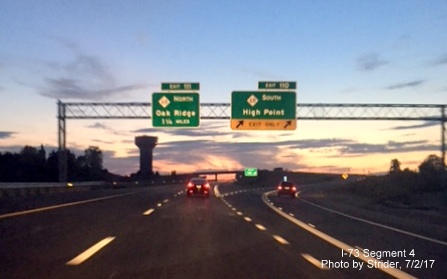 The other segment runs from NC 68 to US 220 just south of the Haw River, it features one exit with NC 150 in Summerfield whose number was changed from 116 to 117 late in the year. 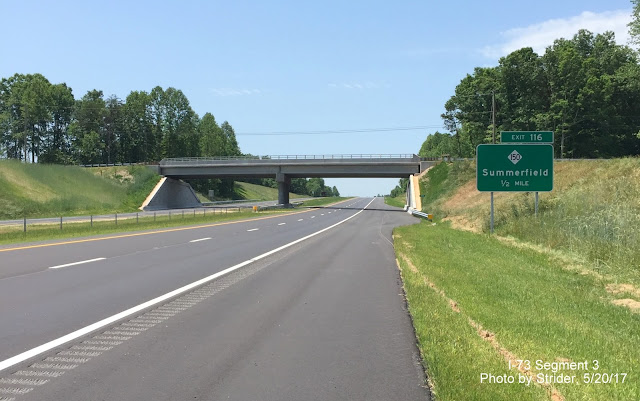 These two sections were the first to be signed as I-73 only with no other concurrent routes. 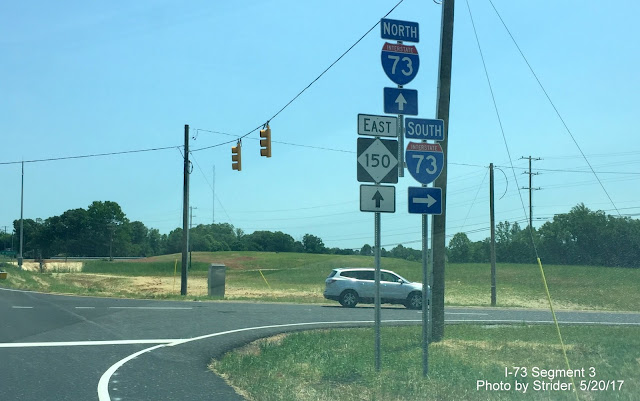 In late December the final segment north of Greensboro was fully opened, though without some exit signs, exit numbers and I-73 shields. These should be remedied in the next few weeks. 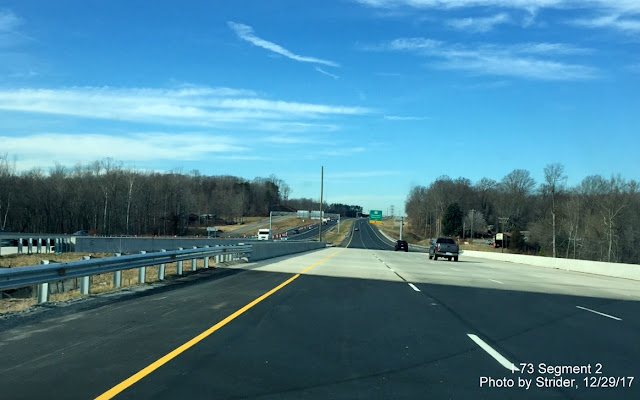 The northern end of I-73 will soon be at the interchange with NC 68 in Rockingham County. Further extension of the route northward depends on what Virginia plans. Their General Assembly passed a I-73 funding bill last year with the catch it has to be approved again this year for it to become law. 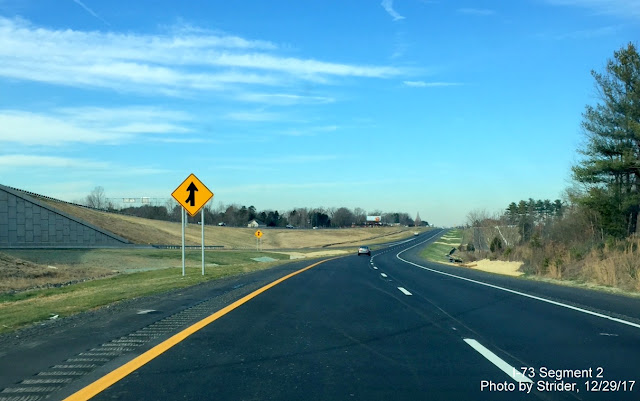 At the other end of the state work has still not been completed upgrading US 220 for 3 miles to become the northern end of the I-73/I-74 Rockingham Bypass. Work is slightly behind schedule, at 88.3% complete at the end of November, with a planned to be opening in April 2018.

The remainder of the Bypass remains unfunded in the 2018-2017 State TIP, meaning currently no work will be done until after 2027.

Whether this will change depends somewhat on South Carolina which in 2017 got the environmental go ahead to construct I-73, if money can be found, but found itself late in the year being sued yet again to halt the project.

Progress on I-74 has not been as dramatic as I-73, but is proceeding. After the remaining US 220 and Rockingham Bypass work is complete, the only active construction will be for I-74 the next several years. Besides the Rockingham Bypass work discussed above, work is continuing on the Eastern Section of the Winston-Salem Northern Beltway. The segment from Business 40 to US 158 is now nearly 1/2 (46.3%) complete as of the end of November. Work is proceeding in building the interchange with US 158 and with Business 40/US 421 and work is to be done in April 2019. 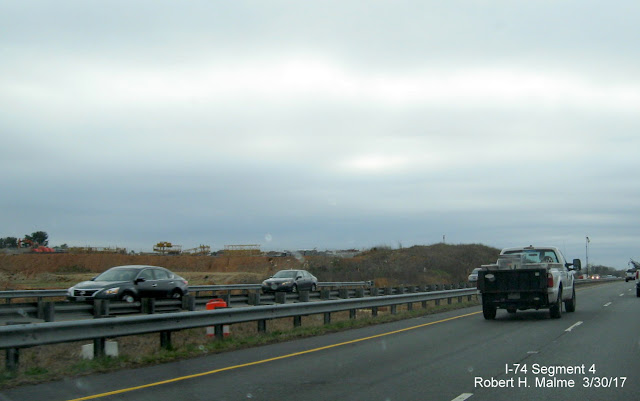 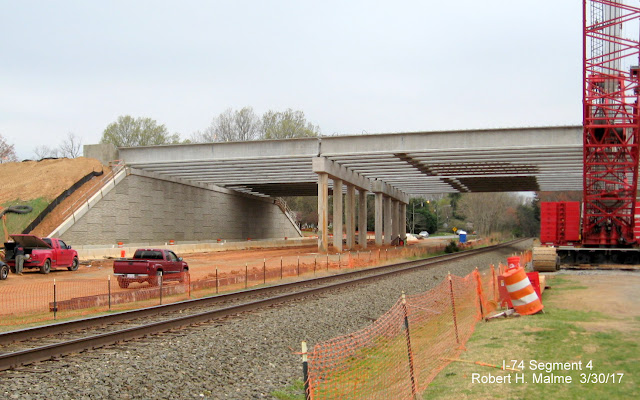 Work is also about to start on the next section from US 158 to US 311 with that work to be completed in November 2021. 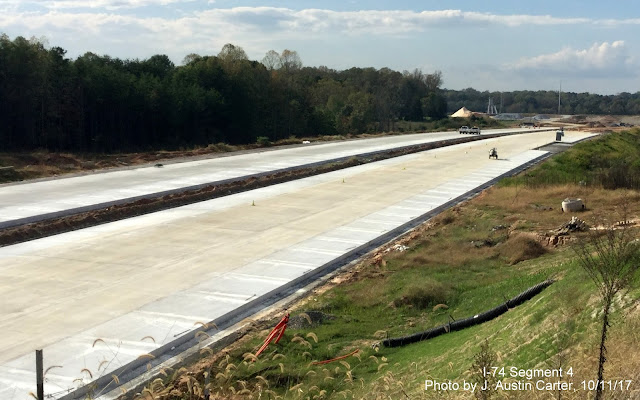 The remaining segments of the I-74 Eastern Section are to be let as 3 separate design-build contracts in March 2018. Work is to start before the end of 2018 and possibly completed by 2022.

As for prospects for the rest of the I-74 route. They look brighter at the end of 2017. While the remainder of the Rockingham Bypass project is unfunded, work east of Rockingham, particularly from Rockingham to Laurinburg, which was not funded in the first edition of the 2018-2027 STIP that was published in August, is now listed as funded in the December 2017 edition. The upgrading of US 74 between the Rockingham Bypass and the Laurinburg Bypass as a design-build contract is to start in 2022 at a cost of $76 million. As a step back, however, it appears NCDOT removed all references to Future I-74 from the Rockingham Bypass in late 2016 (only discovered through a late 2017 e-mail and posting of new images on Google StreetView). Piecemeal work to construct I-74 east of I-95 is proceeding and was accelerated several years in the latest STIP. Work was completed on a new bridge for Old US 74 over US 74 near Whiteville which added 7 more miles of 70 MPH limited access highway at the western end prior to the Bypass. Work is about to start in converting the US 74 intersection with Broadridge Road in Robeson County to an interchange. When that is completed in 2019 US 74 will be limited access for 7 miles after the current end of I-74 at NC 41. Work to upgrade many of the remaining intersections surrounding the bridge over the Lumber River is to continue for the next 5 years. Meanwhile, efforts continue by Wilmington officials to have I-74 end in that city instead of Myrtle Beach including a suggestion in October that I-74 use I-140 to end at Scotts Hill. Meanwhile, the proposed project to upgrade US 74/76 to Interstate Standards remains unfunded. 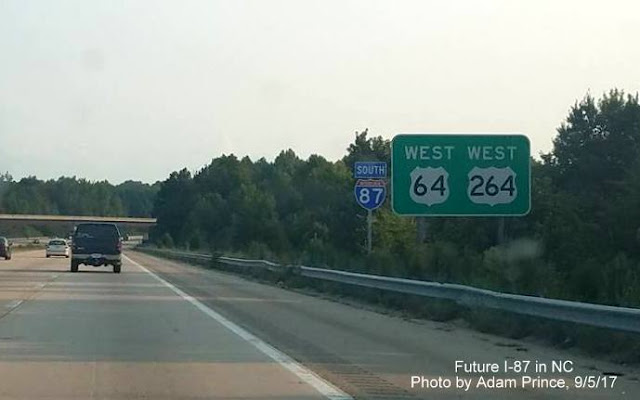 The I-785 portion of the Greensboro Loop opened to traffic in December. 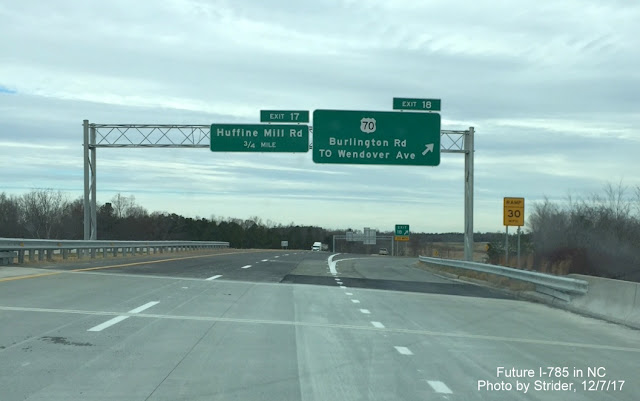 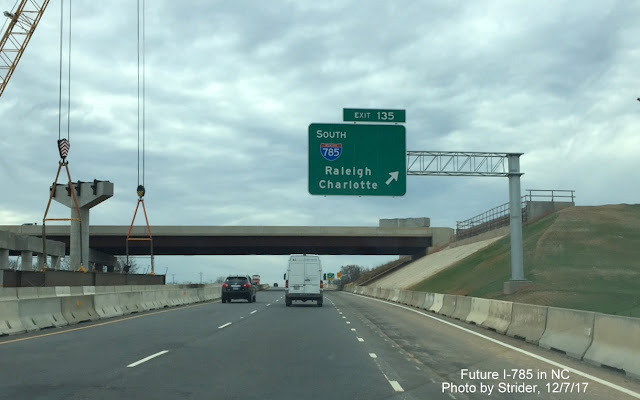 And the final segment of the I-140 Wilmington Bypass opened a couple weeks later (no photos, but you can view this Video courtesy of the Star-News Online).

The western segment of the Greensboro Loop/I-840 from Bryan Blvd. to US 220 was supposed to open in November, but now has been delayed to February 2018. 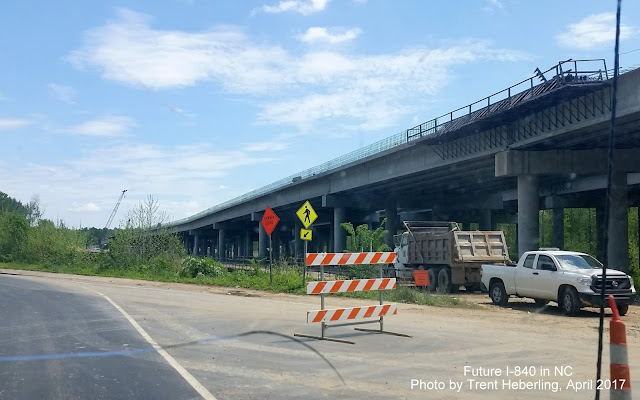 Check here for the latest news for all these routes and more on my Future NC Interstates website.

Thanks to all the news and photo contributors to my I-73/I-74 and Future NC Interstates, in particular, Adam Prince, Strider, J. Austin Carter, LC, Trent Heberling, and David Johnson. Here's to a good 2018 (for highways and other ways).