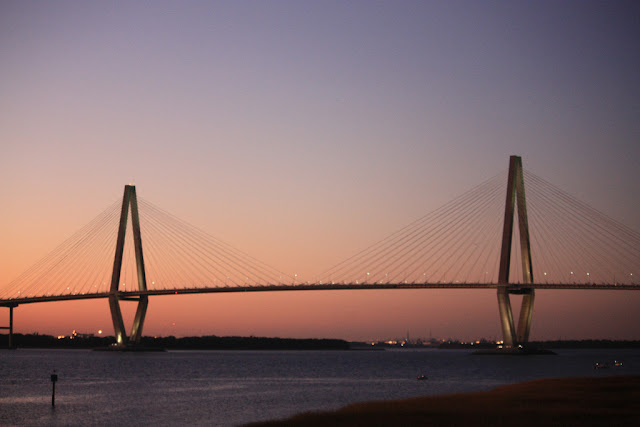 For decades, two massive steel cantilever bridges connecting Charleston and Mount Pleasant, SC rose over the Cooper River, Drum Island, and Town Creek.  The Grace Memorial, opened in 1929, and the Pearman Memorial, opened in 1966, were part of the fabric of Charleston until the last day they carried traffic on July 16, 2005.  Since that day, the new Ravenel Bridge - a massive cable stayed span - carries the tradition of the two that came before it. 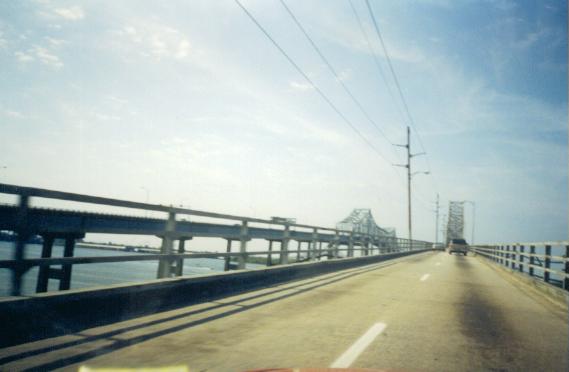 Early in 1946 on February 24, a family tragedy would haunt the bridge.  That afternoon a freighter, the Nicaragua Victory, would plow through the bridge on the Mount Pleasant side causing 240 feet of the bridge deck and roadway to collapse.  An Oldsmobile carrying Bill Lawson, his wife, mother, and their two young children died when the car fell into the river.  The vehicle was recovered one month later with all five bodies still inside. (3)

A ghostly legend from this tragedy was that when the Grace Memorial Bridge was still standing, a green late model Oldsmobile with five occupants would occasionally be reported to be seen on the bridge.  This vehicle would strangely start and stop and one eyewitness account claimed that a man and wife were in the front seat with two children and an older woman were in the back - the same configuration of the Lawson family that fateful day.  The five individuals seen were described as lifeless and looking straight ahead. (4)  The green vehicle would then disappear where the collapsed section of bridge occurred.  These sightings were found to most frequently occur in February - the month of the 1946 Lawson tragedy.  After the Grace was torn down, the sightings of the Lawson family's car trying to make their journey home ended. (4)

Damage, emergency repairs, and higher traffic volumes would create the need for a second span.   The Pearman Memorial - dedicated after former highway commissioner Silas N. Pearman - would open on April 26, 1966 after nearly three years of construction. (1)  The new span would be a wider and more modern structure.  It would carry three lanes of northbound traffic over the Cooper, with one of the lanes being reversible to handle southbound traffic. 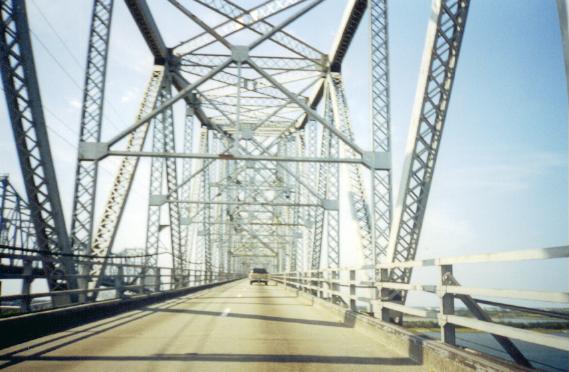 In 1979, an eight ton weight limit would be placed on the aging Grace Memorial.  Years later, because of the weight limit, narrow ten foot lanes without shoulders, steep grades, and deteriorating condition of the bridge, the Grace would be declared structurally obsolete.  The weight limit would later be reduced to five tons and the third lane of the Pearman Memorial would be permanently reversed to handle commercial traffic heading south into Charleston.

With these problems - along with low shipping clearances blocking modern freighters access to the Port of Charleston - the need for a replacement structure increasingly grew.  For two decades, the state and the cities of Charleston and Mount Pleasant would battle over funding and design of the bridge.  Finally in the mid-1990s, Arthur Ravenel spearheaded a campaign that resulted in the combination of federal, state and Charleston County funding to build the $632 million bridge. (5) 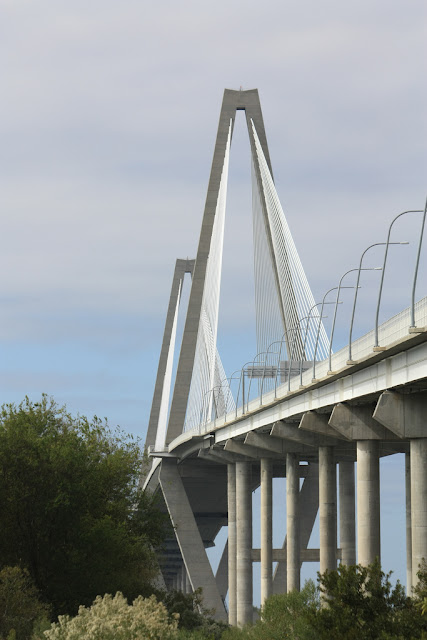 The Ravenel Bridge is colossal cable stayed system, whose main span stretches for 1,546 feet.  The entire bridge system runs for 3.5 miles.  The two diamond shaped cable towers rise a total of 575 feet above the water and can be seen as far as Summerville. (6)   The bridge deck ascends 186 feet over the Cooper River allowing clearance for the most modern of ocean freighters to access the Port of Charleston.  The bridge carries eight 12' lanes of traffic, in addition to 4' outside and inside shoulders.  There is also a 12 foot wide pedestrian and bicycle lane on the south side of the bridge.

The glorious Ravenel opened to a week's long fanfare and celebration in July of 2005.  The bridge, which has become a symbol of pride to the City of Charleston, officially opened to traffic on July 16, 2005.

There are many great vantage points of the Ravenel Bridge.  Two of the best spots are from Patriots Point, which is home to the USS Yorktown and sits south of the bridge off of SC 703.  The other is the Mount Pleasant Memorial Waterfront Park which offers some unique views of the bridge from up close. 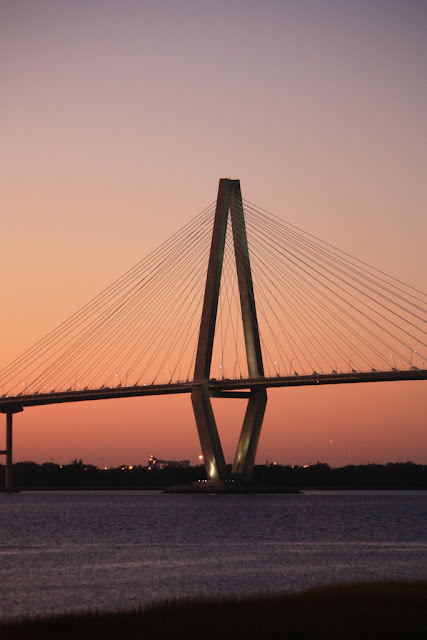 The panoramic view of the Ravenel from Patriots Point is one of the more popular photography spots of the bridge and of Charleston.  Whether it is from the USS Yorktown or from one of the many harbor cruise ships that launch here, the bridge makes its presence known. 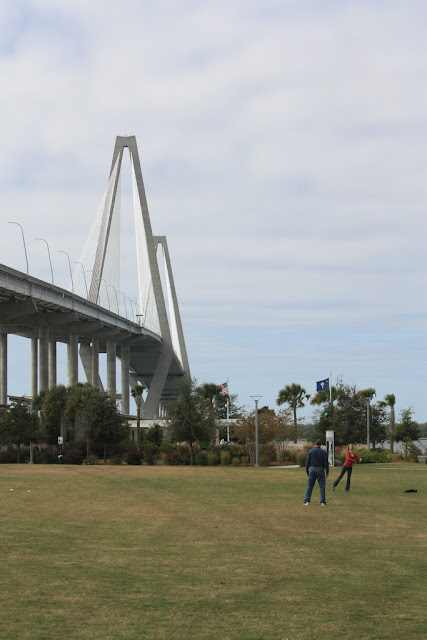 Mount Pleasant's Memorial Waterfront Park offers a different perspective of the bridge along with numerous activities.  Memorial Waterfront Park offers open space, playgrounds, an arts pavilion for local craftsmen to showcase and sell their work, a war memorial for all local veterans, and a 1,250 foot fishing pier that was built on top of the pilings of the former Pearman Bridge. 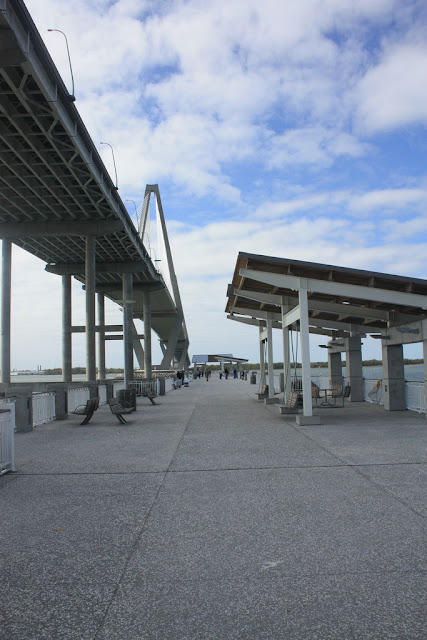 The Ravenel Bridge is also the centerpiece of the annual Cooper River Bridge Run.  The 10 kilometer race runs from Mount Pleasant over the bridge and then into Downtown Charleston.  Held annually since 1978, the event brings over 40,000 visitors to Charleston just to run the race.