By Challenger Tom January 11, 2018
In Cochise County, Arizona along an old segment of US Route 80 designated as Arizona State Route 80 is the old mining town of Bisbee. 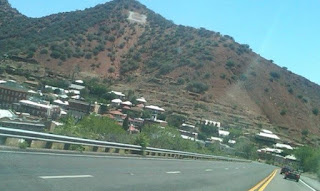 Bisbee is located in the Mule Mountains at an elevation of 5,538 feet above sea level.  Back in the early days of Arizona travel wasn't as direct as it is now.  Often roads followed old wagon trails from the major population centers of the time.  In the case of US Route 80 when it was originally plotted out it took the path of the Old Spanish Trail.  This alignment consisted of a huge southwestern swing into New Mexico to Douglas.  From Douglas US 80 swung northwest through the classic mining communities of Bisbee and Tombstone before swinging west to Tucson.  US 80 also took another major swing north from Tucson to Phoenix rather than westward to Yuma.  US 80 was such in impractical route that I-8 largely took the path of AZ 84 west from Tuscon to Gila Bend and I-10 from Benson to the New Mexico state line.  The path of US 80 makes much more logical sense looking at the 1927 State Highway Map of Arizona:

Bisbee was founded back in 1880 as a gold, silver, and copper mining community.  Since 1929 Bisbee has been the Cochise County seat which was originally in Tombstone.  Early Bisbee centered around the Copper Queen Mine which was in operation from 1880 until 1985.  Bisbee's mining industry survived far longer than it did in Tombstone and largely moved to open pit mining in the 1950s.  The Lavender Pit is the most obvious example of the open pit days with the massive hole easily observed on the south side of AZ 80. 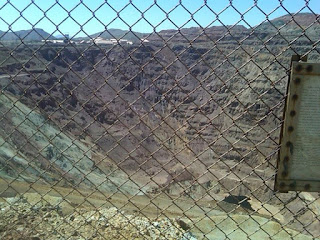 Bisbee's population peaked out near 1960 at about 10,000 residents.  After Lavender Pit closed in 1974 followed by the Copper Queen in 1985 Bisbee began to decline.  The current population of Bisbee is approximately 5,000 residents and doesn't show much signs of slowing any time soon.

Bridgehunter.com on the Mule Pass Tunnel

USends on US 80 end points