By Challenger Tom August 14, 2018
On my way to Yellowstone in 2015 I drove through a small ghost town called Norris on US Route 287 heading southbound in Madison County at the junction of Montana State Route 84. 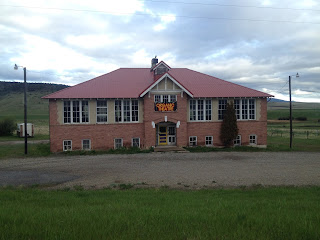 Norris is located on Hot Springs Creek and was settled in the 1860s due to mining claims located in the area.  Norris apparently wasn't all that successful as a mining camp but was close enough to the larger mines in Virginia City and Nevada City to warrant being a terminus of a Northern Pacific Railroad Spur.  Norris and it's Northern Pacific Spur can be seen on this 1891 Map of Montana.

During the Auto Trail era Norris was surrounded by signed routes but apparently never had one enter it.

MT 1 was eventually routed through Norris which can be seen on this 1951 State Highway Map.

As stated in the Nevada City blog MT 1 eventually became MT 287 leading up to the extension of US 287 into Montana by 1965.

Not much is left in Norris today aside from the derelict school house in the photo above and some abandoned older homes.