The eastern start of Interstate 90

By Challenger Tom May 30, 2018
Heading out of Pioneer Square and downtown Seattle I took 4th Avenue to the eastern beginning of Interstate 90. 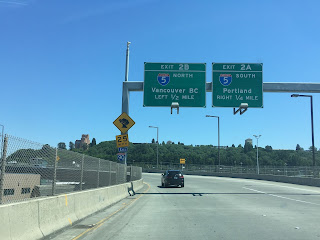 Ultimately I took exit 2A to head south on I-5 towards SeaTac International Airport.  What is interesting about I-90 in downtown Seattle can be seen in the oddity of the exit numbers starting at "2" heading eastbound.  Originally I-90 was envisioned to continue about another block west to US 99 on the Alaskan Way Viaduct.  Apparently there was stub ghost ramps present on the Alaskan Way Viaduct intended to reach I-90.  I'm to understand that the ghost stubs were demolished in 2011 during the first phase of the Alaskan Way Viaduct replacement tunnel.  Either way I found it interesting that the longest Interstate at 3,020 miles doesn't even have a single sign indicating it's grand scale or terminus all the way in Boston.