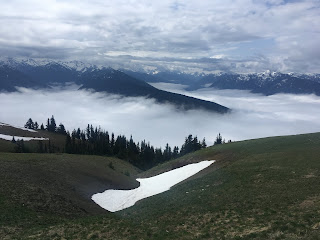 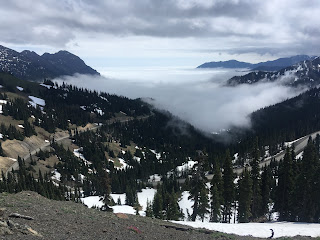 The Hurricane Ridge Road is actually a fairly gradual incline uphill on the southward trek from Port Angeles.  I don't believe there are many sections that exceed a grade of 10% if any.  The roadway for the most part is fairly straight with a surprisingly minimal amount of curves.  There is actually a series of three tunnels near the Morse Creek Overlook.  The cloud line was at about 4,000 feet above elevation this year but back in 2015 it was at about 2,000 feet which permitted far better photo taking conditions. 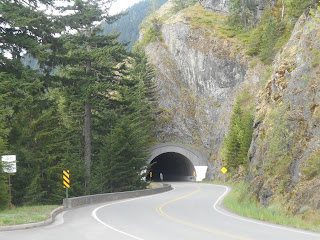 The Visitor Center is located at the 5,242 foot elevation line. 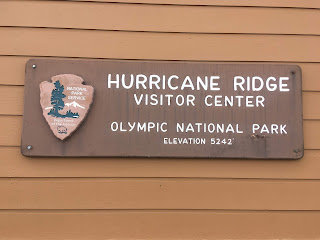 Much of the high peaks of the Olympic Range can be viewed from the Hurricane Ridge Visitor Center.  Snow covers most of the peaks through the year and there are a large number of glaciers.  Despite it being late May much of the trails in Hurricane Ridge were still covered in snow. 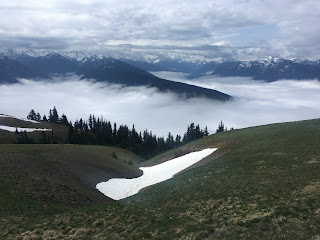 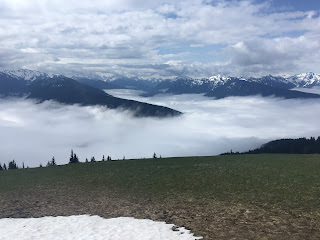 The Hurricane Ridge Road continues about another 1.5 miles west of the Visitor Center to the Hurricane Hill Trail. 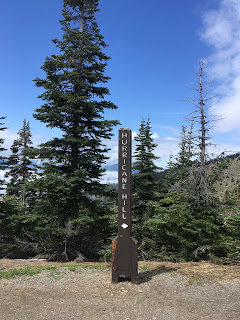 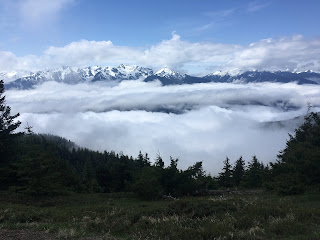 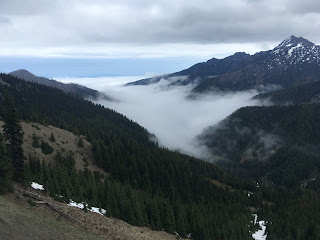 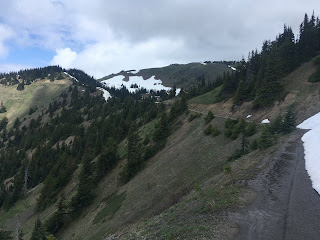 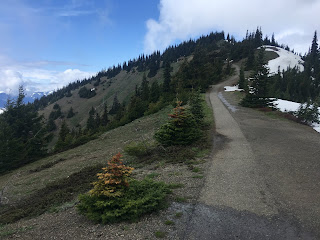 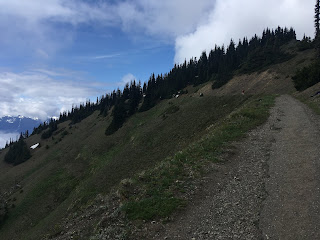 Hurricane Ridge was first documented in 1885.  Originally the area had much more mundane names like "Mount Eldridge" in place of the modern Hurricane Hill.  Hurricane Ridge came to be known by the modern name when a mining prospector climbed Hurricane Hill in 100 MPH winds in 1897.  A more detailed version of the story can be found on exotichikes.com.

The earliest reference I could find for the Hurricane Ridge Road was a trail on a 1919 map of Washington State.

It doesn't appear that the Hurricane Ridge Road was built up from a trail at least until the mid-20th century as it does not appear on this 1956 Highway Map of Washington State.  I'm not sure when the Hurricane Ridge Road was built but I would like to find some post-1956 maps to narrow down a time frame.  If you have maps highway maps from Washington State from post-1956 please send me a note.

According to Mapmikey on AAroads Race Street and Mount Angeles Road south from US 101 in Port Angeles was signed as Secondary State Highway 9G.  In 1970 WA SSH 9G was renumbered to WA 111 which was decommissioned apparently in 1971.

Rod said…
Hurricane Ridge Road construction began in 1952, was delayed for two years due to difficulties excavating the three tunnels, was completed in late 1956 and opened in January 1957.