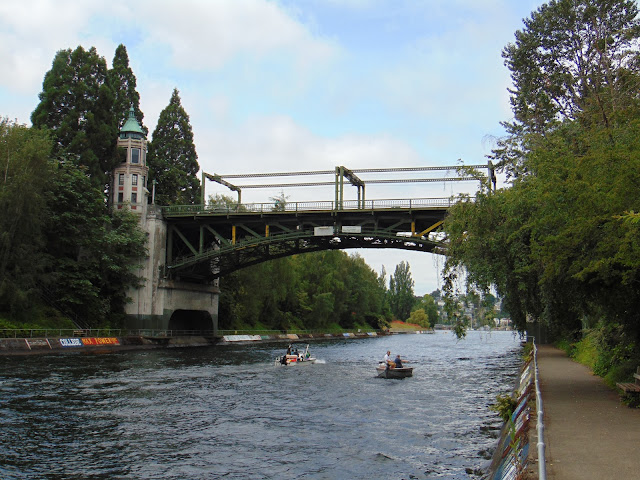 In many ways, the Montlake Bridge is the gateway to the University of Washington in Seattle. With its Gothic architectural touches, this bridge over the Montlake Cut of the Lake Washington Ship Canal fits right in with the university campus located just to the north. The Montlake Bridge spanning the Montlake Cut in Seattle was completed in 1925, the easternmost and the last built of four double-leaf bascule bridges that carry both vehicular and pedestrian traffic across the canal. Based on a Chicago design for bascule lift bridges, the Montlake Bridge is 345 feet long with a main span of 182 feet, a width of 40 feet, and a clearance of 19.8 feet. The bridge does open for vessels as needed, generally about 2,500 times per year.
Serving as the only direct link between the Montlake neighborhood and the University District, the Montlake Bridge is part of WA 513. It should be noted that it was quite the process for the Montlake Bridge to become reality. Seattle voters denied funding for the Montlake Bridge on five occasions between 1914 and 1922, and when a $500,000 bond issue finally was passed in 1923, the bond issue was ruled void due to technical reasons. The bond issue for a Montlake Bridge went before the voters one last time in 1924, finally gaining approval.
One group that was instrumental in getting the necessary votes for the construction of the Montlake Bridge was University of Washington football fans. With the Montlake Bridge's proximity to modern-day Husky Stadium and the University of Washington campus, it was a project that would more directly benefit football fans who previously may have needed to make a more lengthy detour to get to the stadium, save for the deployment of a temporary pontoon bridge that began service in 1920 across the Montlake Cut, allowing fans to walk to home games via Montlake Boulevard. Before the 1922 vote, bridge supporters tried a new tack, mobilizing fans to support the project by dubbing it the Montlake-Stadium Bridge as the first University Stadium was built in 1920. Boosters took up the Montlake-Stadium Bridge name and lobbied hard for voter approval of the span. Success almost came when, on May 2, 1922, the bridge for the first time received a majority of the votes cast, but still fell 1,872 votes short of the necessary 60% for approval.
Scandal and technicalities also played a role in building momentum in getting voter approval for the Montlake Bridge construction. On July 12, 1922, the Seattle Post-Intelligencer claimed that the City of Seattle's engineering department had since 1913 spent $682,000 more on salaries than it had spent building all three of the other canal bridges combined, which in turn begat a minor scandal. The City Engineer Arthur H. Dimmock was soon replaced and funding for the Montlake Bridge went to the voters for the seventh time on May 8, 1923, just squeaking through with 211 votes more than the 60% needed. However, the winning vote fell afoul of recent changes in Washington State law governing serial bonds, so the measure had to be resubmitted to the voters in 1924. A public relations campaign was started and adopted a motto intended to shame voters who might not benefit directly from a bridge at Montlake. Influential football fans joined the fray, and in the election on March 10, 1924, voters again approved bridge financing through $500,000 in bonds by a margin of 81% in favor. Construction began soon afterward and the bridge opened ahead of schedule on June 27, 1925, with the City of Seattle staging a gala ceremony to dedicate the Montlake Bridge to both automobiles and streetcars.
Today, the Montlake Bridge continues to serve as a necessary transportation link between the University of Washington Campus, Husky Stadium, the Montlake neighborhood, and Seattle as a whole. While the streetcars are gone, I found that there were plenty of cars, bicycles, and pedestrians crossing the bridge, along with plenty of boats crossing underneath the bridge. The Montlake Bridge is truly a gem and fits seamlessly within the community.