Andrew Jackson shot and killed a man here once. 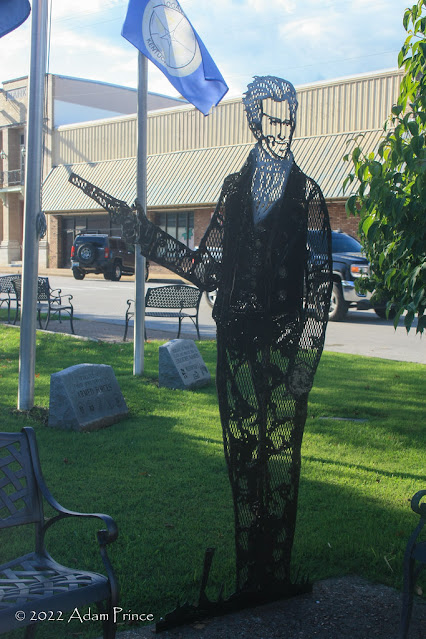 In 1806, at a spot a few miles west of town on the banks of the Red River, Andrew Jackson and Charles Dickinson settled a lengthy and heated dispute over a canceled horserace and comments made about Jackson's wife.  It takes a bit of research to find the spot where Jackson killed Dickinson, but the general area is the north shore of the Red River along Barren Plains Road. Though both men were residents of Tennessee, the Volunteer State had outlawed duels by 1806.  Kentucky had not.  The two men agreed on the site, date, and logistics of the duel.  Twenty-four paces apart and Dickinson - a renowned marksman - shooting first.  Indeed, Dickinson shot first - hitting Jackson in the chest but stopping before his heart.  Jackson, though wounded, remained standing and fired a shot into Dickinson's abdomen. Dickinson would die one day later. (1)

Though the dueling grounds are not marked with any historical marker or monument, on US 431 in Adairville - there is a Kentucky Historical Marker noting the event.  In Adairville's public square, there is artwork depicting the scene.

Adairville is a small town of under 1,000 people on US 431 just north of the Tennessee State Line.  It was first known as Dromgooles' Station - and was known as that at the time of the Jackson-Dickinson Duel.  In 1818, the community changed its name to Adairsville when the town was platted by General Robert Ewing and Michael Traughber.  Adairsville was named after John Adair, who commanded Kentucky troops in the Battle of New Orleans and would serve as Governor of Kentucky from 1820-1824.  Later in the 19th century, the 's' in Adairsville was dropped, and Adairville would become the town's formal name. (2)
Since 1947, Adairville has hosted a strawberry festival.  Held over the third weekend in May, it is one of the numerous strawberry festivals throughout Kentucky.