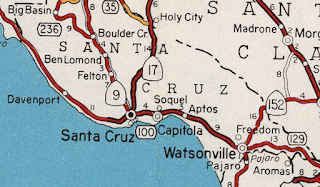 The route that became CA 100 was added to the State Inventory in 1959 as part of the Freeway & Expressway System as Legislative Route 287.  According to CAhighways.org the initial definition of LRN 287 had it begin at LRN 5 (CA 17) and was defined over the below alignment to LRN 56 (CA 1) through downtown Santa Cruz.

For context the above alignment would required tearing down a large part of the densely populated Santa Cruz.  A modern Google imagine immediately reveals how crazy an alignment following Ocean Street, 2nd Street, and Chestnut Street would have been. 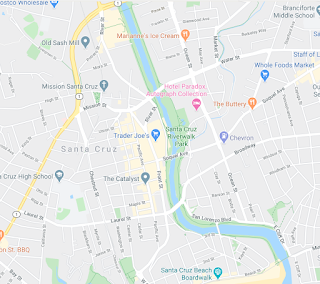 LRN 287 first appears on the 1960 Division of Highways State Map. 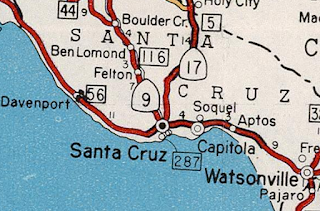 In 1961 the definition of LRN 287 was generalized to; from LRN 5 via the beach area in Santa Cruz to LRN 56 west of the San Lorenzo River.  This new more generalized route description of LRN 287 can be first seen on the 1962 Division of Highways State Map.

CA 100 never had a formal route adoption but somehow it ended up being rescinded anyways in 1975 according to CAhighways.  One of the proposals for a freeway bypass of downtown Santa Cruz was building a parallel route to CA 1 north of Mission Street but it was highly contended locally.  Following U.C. Santa Cruz being established in 1965 some of the proposals for CA 100 had the corridor routed north of downtown and by the School Campus in the foothills of the Santa Cruz Mountains.

Despite the numerous proposals for CA 100 the route has never been Legislatively deleted.  CA 100 still appears on the 2005 Caltrans State Map with the same route definition it had in 1964. 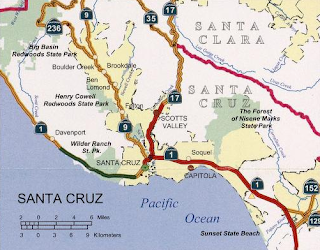 Assuming CA 100 was constructed to the 1964 definition it would likely split from the CA 1 freeway/CA 17 expressway junction south via the corridor of Ocean Street.  The theoretical split in CA 100 would likely occur at a shared interchange with CA 17 as seen below from current CA 1. 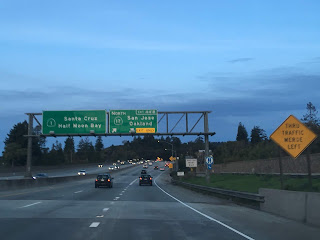 The reverse view from CA 1 south approaching the junction of CA 17.  The split for CA 100 would likely be a right hand exit had it been constructed. 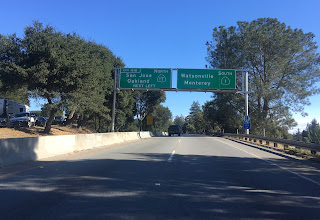