By Challenger Tom January 13, 2019
Circumstance had me flying by one of the more infamous road features in Arizona; "The Stack" interchange for I-17, US 60 and I-10. 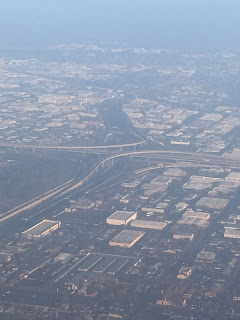 Arizonaroads.com has a stub article which shows pamphlet information regarding the elevated Papago Freeway.

arizonaroads.com on the Papago Freeway

The route of I-17 west of downtown Phoenix was actually part of the current Arizona State Route 69 which has existed since 1938.  Originally AZ 69 took 43rd Avenue from north US 60/US 70/US 89 on Grand Avenue.  AZ 69 was moved to a new alignment on 25th Avenue by 1950 according to Arizonaroads.com, said alignment can be seen on the 1951 State Highway Map.

AZ 69 in the Phoenix Area was built to freeway standards between Buckeye Road north past Northern Avenuesome time between 1956 and 1961 which is known as the Black Canyon Freeway can be seen on the two maps below.

By the early 1970s the southern half of AZ had become I-17.  Only a short stub of I-10 had been built past the I-17 interchange east of downtown Phoenix which can be seen on this 1971 City Insert below.

As I-10 was being built through downtown Phoenix it had a temporary alignment on I-17 to the location of the modern Stack.  In time US 70, US 80 and US 89 were removed from the Phoenix Area while US 60 was routed on a multiplex of I-10 to I-17.  US 60 currently multiplexes I-17 to the Stack before splitting away at Grand Avenue.