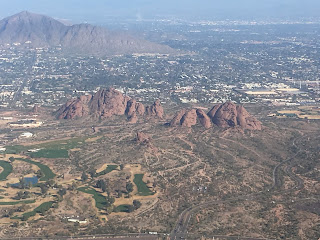 Papago Park is a dual-city park located in Phoenix and Tempe along the Salt River.  The main feature of Papago Park is the eroded sandstone mountains which thought to be anywhere from 6 million to 15 million years old.  Papago Park today is a large park that offers hiking, golfing, a botanical garden, the Phoeniz Zoo and several other attractions.  The signature feature of Papago Park is the "Hole-in-the-Rock" formation which is located on the eastern mountains in the above photo.  The Hole-in-the-Rock may have been by the Hohokam Tribe to track movements of the sun.

Interestingly Papago Park was once part of Pagago-Saguaro National Monument which was declared in 1914.  In 1930 Papago-Saguaro National Monument was disbanded by Congress and the land was turned over the City of Tempe in addition to Salt River Project.  From 1942 to the end of World War II the grounds of Papago Park were used as a POW camp.  In 1959 the Salt River Project turned over their portion of Papago Park to the City of Phoenix.