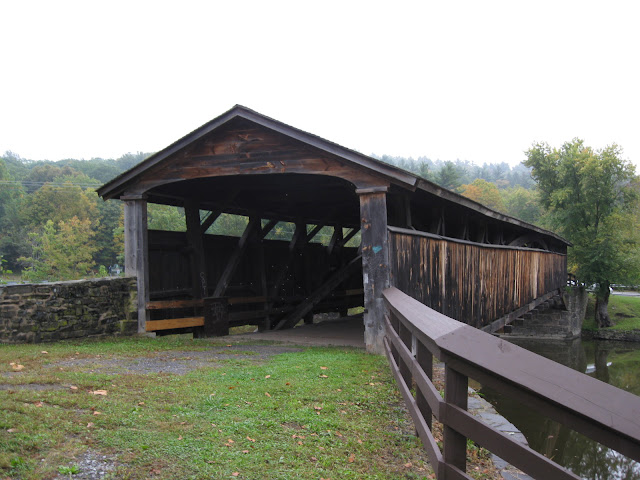 If you are traveling northbound along the New York State Thruway, you may notice a roof of a covered bridge as you cross the Wallkill River near Rifton (not far from Rosendale), just about halfway between the New Paltz and Kingston exits. Your eyes are not deceiving you, as that is the historic Perrine's Covered Bridge that you are passing. While you would have to do some backtracking along NY Route 32 or NY Route 213 if you decide to turn around in Kingston to see the bridge, there is plenty of history and scenic beauty if you decide to do so.

Perrine’s Covered Bridge is one of five covered bridges that is still standing in Ulster County. Owned and maintained by Ulster County, Perrine’s Covered Bridge was named after James Perrine, who was a son of French immigrant James Perrin and Huguenot descendant Catherine Freer. Perrine had operated a hotel and tavern starting in the 1820s on the south side of the Wallkill River at the site that subsequently was chosen for the covered bridge. Plus, nearby areas to the covered bridge site were part of the Perrine farm.

Ulster County Board of Supervisors’ records show that a bridge was authorized “near the house of James Perrine” in 1822 and again in 1834, However, the current Perrine's Bridge was built by Rosecrans Wood in 1844, who lived a few miles south of the bridge on a farm which is now occupied by Oscar Tschirky, the famous "Oscar of the Waldorf Hotel". This 154 foot long single span bridge incorporates the Burr arch design patented in 1817 by Theodore Burr. It is one of three authentic Burr arch truss bridges remaining in New York State (the other two being the Hyde Hall Covered Bridge and Salisbury Center Covered Bridges) and the longest standing Burr arch covered bridge in the state. It is also the second oldest bridge in New York (the first also happens to be Hyde Hall). The total cost to build the Perrine Covered Bridge in 1844 was approximately $2,200.

The construction of three covered bridges—Perrine’s, Phillies, and one in the village of New Paltz—across the Wallkill River within fifteen miles in the same decade all helped connect the area to communities beyond when a network of new roads was also being laid out.

At the time of the construction of Perrine’s Bridge, there were nearly twenty mills and factories in the hamlet of Dashville adjacent to two waterfalls along the Wallkill River that were only about 3/4 mile from Perrine’s Bridge. The Dashville industrial complex supported more than a thousand workers who, beginning in the early 1800s, spun cotton into yarn then subsequently cloth itself before diversifying to produce everything from wool blankets and carpets to cotton products, flour, knives and lumber. The construction of Perrine’s Bridge, along with two other covered bridges in the area, the Phillies Covered Bridge and a covered bridge within the Village of New Paltz, made it easier for workers to work at the Dashville mills.

While horse drawn carriages once crossed Perrine's Covered Bridge, today it is a scenic bridge open only to pedestrian traffic, even with motor vehicles whizzing on by just feet away on the Thruway. The bridge is now a New York State historic site and has been restored a few times, most recently in 1997 at a cost of $195,000. There is a pulloff along NY 213 for any curious passerbys to see the covered bridge. 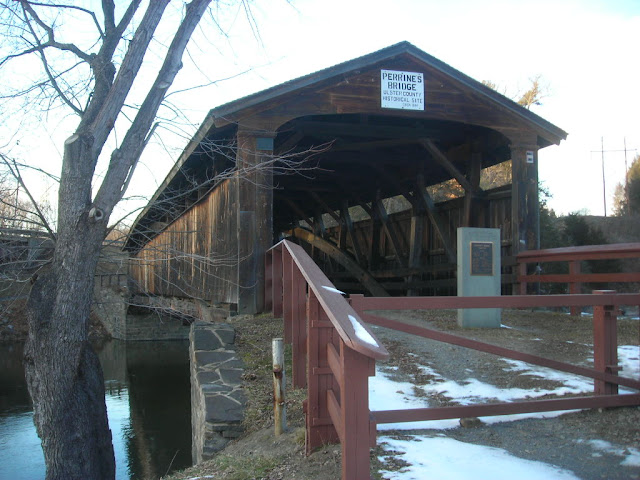 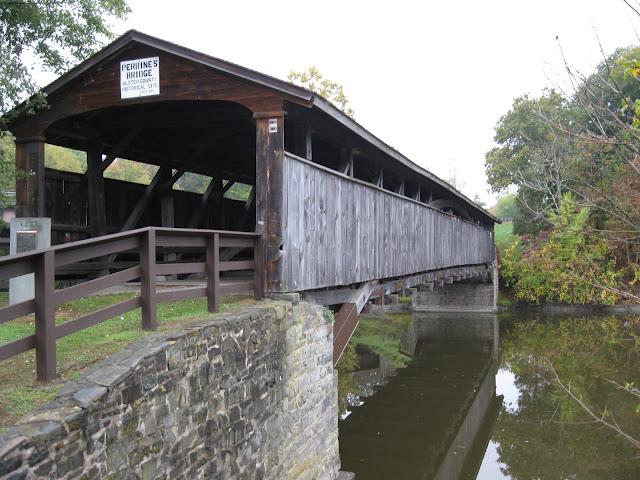 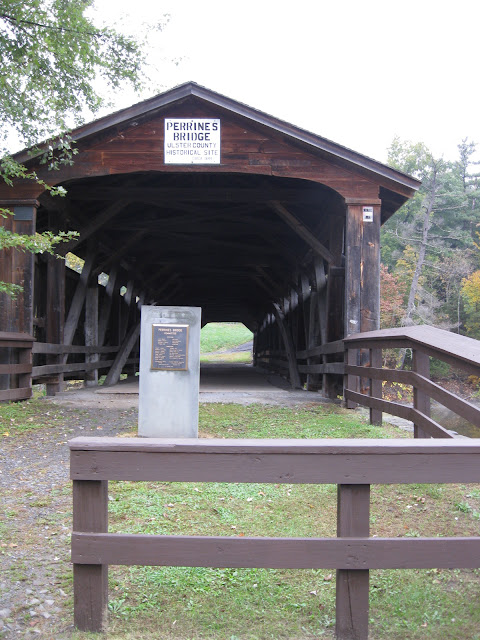 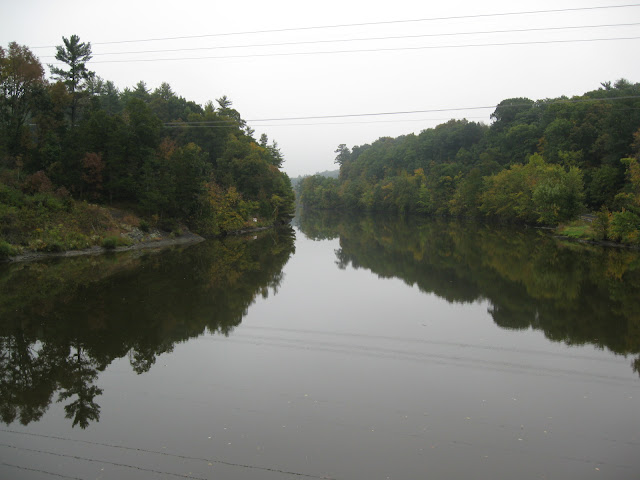 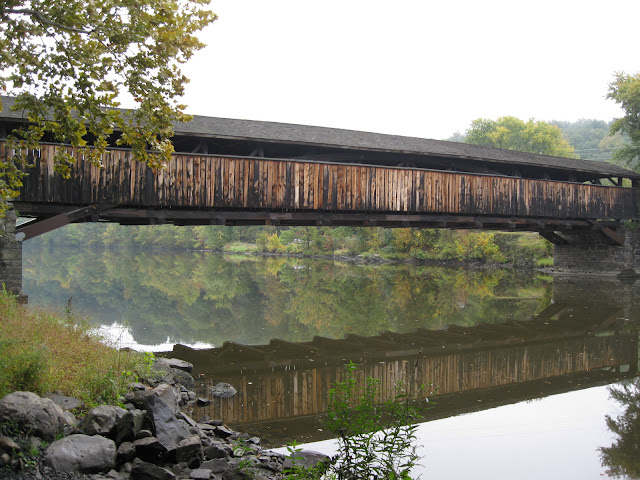 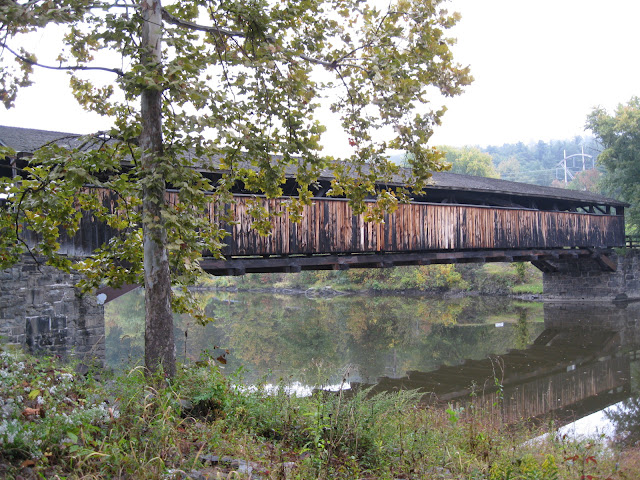 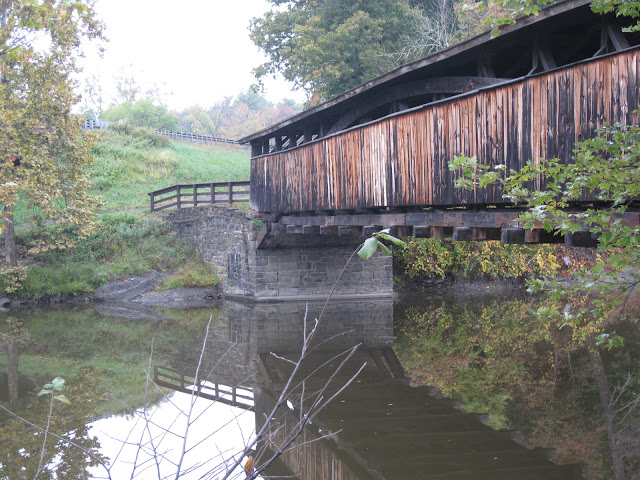 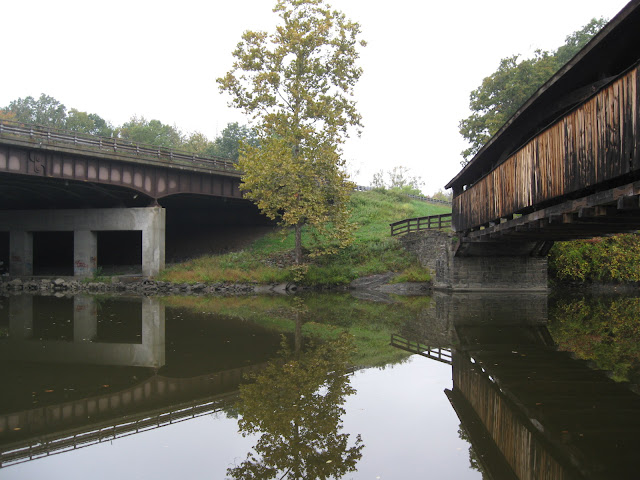 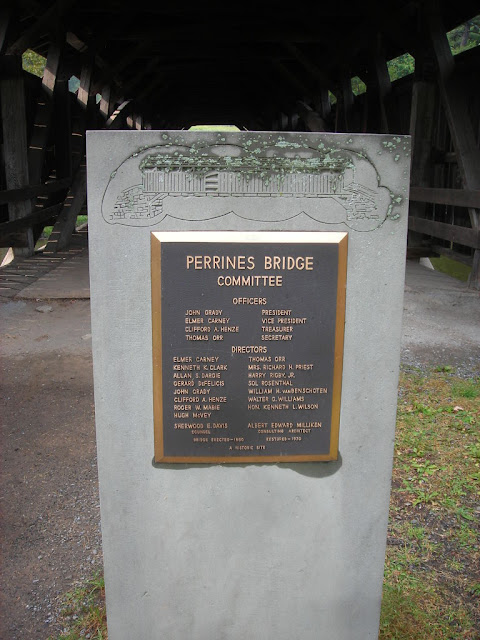