By Bob Malme January 01, 2020
I'm back for my annual review of what's happened over the past year with construction of I-73, I-74 and your other favorite new and future interstates of North Carolina, and a preview of what's to come in 2020:

2019 was a slow year for I-73. The only news was the letting of the contract to build the I-73/I-74 Rockingham Bypass in October. According to the NCDOT Construction Progress Report listing, work has not started on project as of the end of the year. Sign plans published with the contract letting show that I-73 will initially end at the US 74 interchange when the project is completed around 2023, and that only the first two exits will receive new  I-73 exit numbers:

Work to complete I-73 at its northern and southern ends is still waiting for action by Virginia and South Carolina. A project to upgrade the US 311 interchange along US 220 in Rockingham County, which was suspended this past fall due to NCDOT budget problems, has been now been given the green light for preliminary engineering in 2020.

There was more activity involving I-74 in 2019, besides the Rockingham Bypass. Work continued on the Eastern Section of the Winston-Salem Northern Beltway between Business 40/US 421 and US 52 with construction occurring on 4 separate contracts. While earlier in the year, NCDOT indicated that the first segment from Business 40/US 421 to US 158 would open by the end of the year, it appears weather delays have moved the opening into 2020. Here was the view last spring at the future US 158 interchange, thanks to J. Austin Carter: 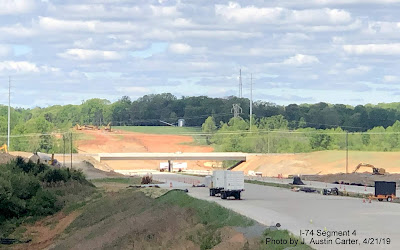 Work begun in earnest also along US 52 in creating the future I-74 interchange, here's a photo of the new realigned exit to NC 65 from July, from the same source: 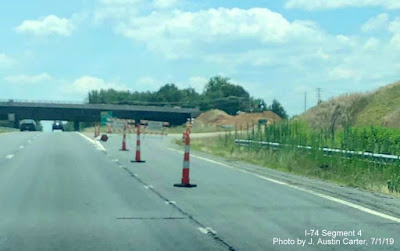 Sign plans obtained at the end of the year provided answers to what the exit numbers will be along the entire Beltway and offered clues as to what the signage approaching US 52 would look like: 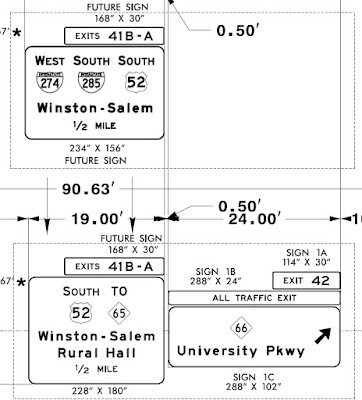 Meanwhile, at the other end of I-74, work was completed on the US 74 interchange with Broadridge Road in Robeson County on November 13 meaning a couple more miles to the defacto I-74 freeway east of Lumberton. Work continues on the upgrading to an interchange of the intersection with Hallsboro Road east of Whiteville. Work is almost 2/3 complete as of November and this new interchange (would be Exit 248 on I-74) could open by the end of next year. Meanwhile, projects to start in the next couple years to upgrade intersections to interchanges for NC 130/NC 72 in Robeson County and Chauncey Town Road in Columbus County, put on the NCDOT Suspended List back in October due to budget problems, have been reinstated with the new December Suspension list. However, projects from the 2020-2029 STIP that were to upgrade US 74 to Interstate Standards between the Rockingham and Laurinburg Bypasses and between NC 41 in Lumberton and US 76 in Whiteville in the late 2020s are still on the List. 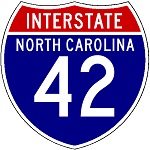 While the potential signing of I-42 along the US 70 Goldsboro Bypass didn't happen, there was some progress in bringing this future interstate closer to reality. Work started on the future 10.1 mile long Havelock Bypass on August 31. The project start was delayed a few months due to permitting issues, but apparently not due to problems with the sign plans which had I-42 on the right instead of the left and the wrong exit numbers for US 70 (these are numbers for existing exits in the New Bern area): 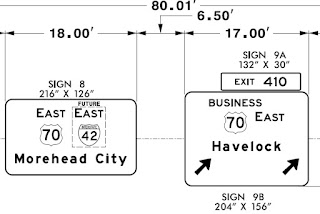 These plans were not changed when the contract was finally put out to bid. Work also started in October on improvements to US 70 through James City that will bring that part of US 70 up to interstate standards and the project to upgrade the shoulders of US 70 for 26 miles between Dover and New Bern. The original date for completion of the project was to be the spring of 2020, but that has been moved back a year to 2021. There were seemingly press releases about lane closures for this project on NCDOT every other week, all of which indicated the route would be renamed I-42, though they never mentioned when. Probably because work will need to be completed in Johnston County between I-95 and the Goldsboro Bypass before that can happen. Speaking of, work on one pavement rehabilitation on US 70 in the Johnston County area started in August, and is to be completed in 2020. Other projects are a few years away. 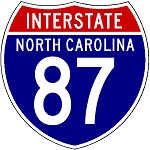 The major news with I-87 in 2019 was the official changing of exit signs along I-440 and US 64/264 to more formally proclaim the interstate's existence. Work in May through July added I-87 to the overhead signs and changed the mile markers and exit numbers on the Knightdale Bypass to reflect I-87's mileage, here southbound at the intersection with I-440, photo by David Johnson: 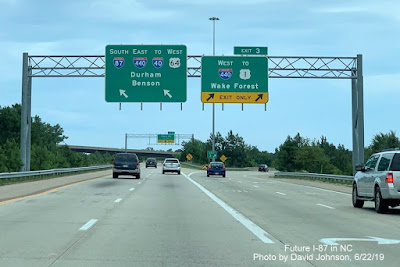 It appears the signed sections around Raleigh will be it for awhile since the next planned project to extend I-87 toward Zebulon that was to take place in 2025 was pushed back to 2029 when the Final 2020-2029 STIP was released in September. Several I-87 related projects were also put on NCDOT's Suspended list in October including the upgrading of US 64 in the Rocky Mount Area and US 17 in Perquimans County.

While ground mounted signs went up along US 52 in November 2018, this year was to mark the addition of overhead and ramp signage making the interstate more official. A contract was advertised in June that would add the new signs, not just for I-285 between Lexington and Winston-Salem, but also remove US 311 signs along US 52, I-40 and I-74 in Forsyth County due to its decommissioning in 2018. For an unknown reason, the letting was postponed until September. The contract was awarded in October and an official page put up on the NCDOT's Construction Progress Report site, but work had not started as of December 31. Work is to be completed by the fall of 2020. Here's one of the new I-285 sign plans for I-85: 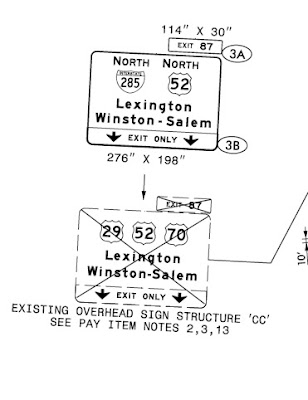 The big news for I-295 was the opening of the new section between the All-American Freeway and Cliffdale Road on November 26. With the opening of this section it appears that the section from I-95 to the All-American Freeway, already officially I-295 based on AASHTO and FHWA approvals, is to be signed as I-295, but I do not know if any other signs have been changed other than the one seen on this City of Fayetteville video of the new section before it opened: 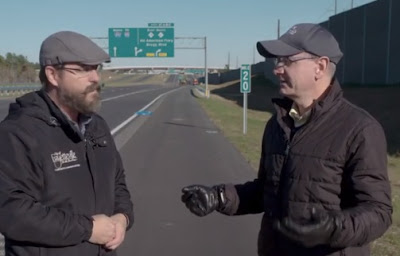 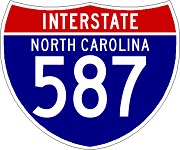 Work started on September 30 on a project that will widen the shoulders of US 264 to interstate standards in Pitt County (I-6032). When this is completed work will move to widening US 264's shoulders in neighboring Greene County.

A funded project to upgrade US 29 from the Greensboro Loop north to Reidsville was included in the 2020-2029 STIP announced in September. Work is not to start, however, until 2027 and the project was out on NCDOT's Suspended List due to budget problems in the fall.

Construction continues on upgrading intersections to interchanges south of Goldsboro with the completion of the interchange with O'Berry Road and near completion of the interchange with Country Club Blvd., to open next spring. Funded projects in the 2020-2029 STIP included those that will extend I-795 from Goldsboro to I-40 through Duplin, Sampson and Wayne Counties, but work is not to start until 2029. A pavement rehabilitation project started on I-795 north of Goldsboro, but unlike past projects, this appears to be for normal wear and tear on the existing asphalt.

On December 30, I-840 was extended 1.9 miles further to the east from Battleground Avenue to Lawndale Drive. The road is marked as I-840, despite now not ending at a state route, photo courtesy of Strider: 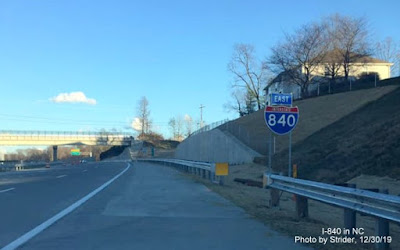 Work continues on the remainder of the Loop between Lawndale Drive and US 29 with the next segment to Elm Street planned to be opened by the end of 2020. 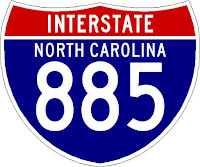 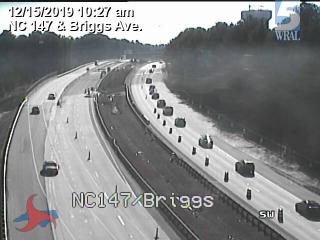 The other major news for 2019 was the placement of new overhead signs along NC 147 North for the I-885 interchange that included, though mostly covered over, I-885 shields, courtesy of David Johnson: 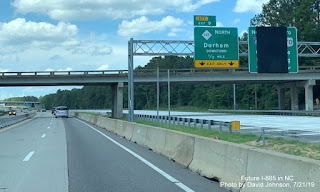 The signing of NC 147 as Exit 9 and another exit sign beyond the interchange for Briggs Avenue with a 1 in the exit tab, instead of 10, caused speculation that something may have changed regarding the routing of NC 147 after I-885 is signed. An NCDOT contact with an AARoads Forum poster Roadsguy confirmed that it has been decided that NC 147 North will start at the East End Connector interchange. The current Toll NC 147 part of the Triangle Expressway will become Toll NC 885. This will allow NCDOT to keep the current exit numbers along the Triangle Expressway and Durham Freeway portions of I-885. NC 147 exit numbers will start at 1A southbound for I-885 North and be 9 less than their current number to US 15/501. Here's one of the revised sign plans for the I-40 Durham Freeway exit, courtesy of Roadsguy: 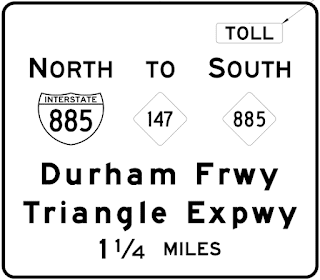 The completion date for the East End Connector project kept getting pushed back throughout the year from the end of 2019 to May 2020, and now November 2020. Hopefully, this will be the final date.

Thanks for the site contributors for providing information, sign plans, and photos including J. Austin Carter, David Johnson, Adam Prince, Roadsguy and Strider. For those who want more information on any of the routes highlighted in the Year in Review, feel free to visit  my sites:
I-73/I-74 in NC and  NC Future Interstates .