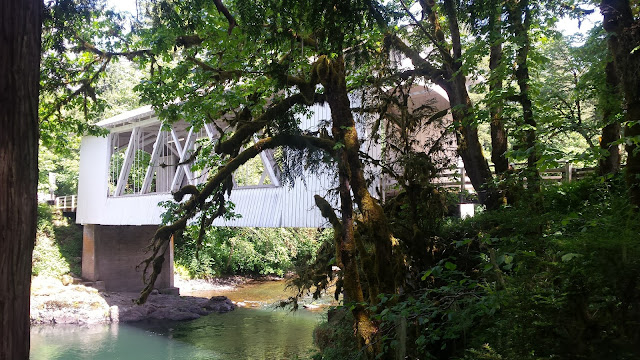 Built in 1945, the Short Covered Bridge is the last remaining covered bridge that spans over the South Santiam River and is one of a few remaining covered bridges in Linn County to feature a roof made of wooden shingles. The Short Covered Bridge is far from short, spanning a total length of 173 feet across the South Santiam River. When the covered bridge was built, the bridge was known as the Whiskey Butte Bridge, but over time, it was renamed for a long time area resident by the name of Gordon Short. Visitors to the bridge may spot by ducks, deer and other animals hanging out around the bridge, and during the summer, fishermen on or under the bridge try to catch fish from the waters of the South Santiam River. On the early June after that I stopped by the bridge, I saw neither animals nor fish, just a parking lot along US 20 where I could park my car.

One thing that caught my eye as I was checking out the Short Covered Bridge was located on the other side of US 20. There was a fake ghost town built across the street called the Short Bridge Ghost Town. The fake ghost town is a bit of a roadside attraction that is as much of an art exhibit as it is a homage to the Old West of yore.

The Short Covered Bridge is found along Over the Rivers and Through the Woods Scenic Byway that crosses Linn County from Brownsville to the Cascades on OR Highway 228 and US 20, along with the historic corridor of the Santiam Wagon Road as well. This allows you to visit plenty of historic and scenic places in the area. The bridge is certainly worth the short stop to see.