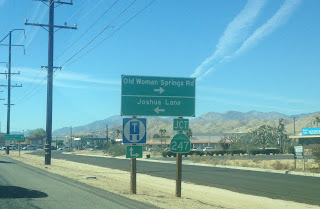 CA 247 is 78 mile north/south State Highway contained entirely within the Mojave Desert of San Bernardino County.  CA 247 has a southern terminus at CA 62 in Yucca Valley and a north terminus at Interstate 15 in Barstow.

According to CAhighways.org the segment of CA 247 between CA 62 in Yucca Valley along Old Woman Springs Road to CA 18 in Lucerne Valley was part of Legislative Route Number 187.  LRN 187 was created by the State Legislature in 1959.

By 1964 the California State Highway renumbering occurred and LRN 187 was changed to CA 247.  The 1964 State Highway map shows CA 247 on Old Woman Springs Road still as a proposed route.

By 1970 the route definition of CA 247 was extended north of Lucerne Valley to Barstow via Barstow Road.  CA 247 on Old Woman Springs Road and Barstow Road was brought up to State Highway standards sometime between 1970 and 1975.  This can be seen by comparing the State Highway maps from 1970 to 1975.

Both Old Woman Springs Road and Barstow Road existed long before LRN 187 or CA 247 existed.  Both roadways can be seen as maintained County Roads on the 1935 California Division of Highways Map of San Bernardino County.  Barstow Road appears to have largely straightened and shifted east of Lucerne Valley Cutoff Road.

CA 247 interestingly contains a spur route which connects to CA 18 in Lucerne Valley.  Main line CA 247 swings north towards Barstow on Barstow Road in Lucerne Valley whereas the spur route continues to CA 18 on Old Woman Springs Road.  The spur CA 247 is not signed with reassurance shields aside for a "To CA 18" heading northbound.  The Caltrans Post Mile tool shows the CA 247 maintained as part of Post Mile SBD 44.63-44.84. 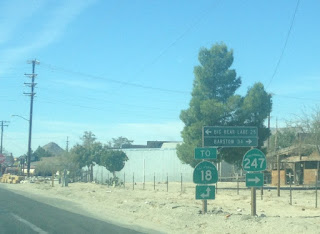 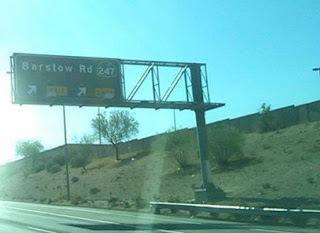