For Raleigh and Durham area motorists, construction and or new highways is the norm.  It is a growing region, and with that comes traffic, an endless sea of orange barrels, and testing of patience.  And the first half of 2022 will be no different - specifically around Research Triangle Park.

There are a few new numbers, and a directional change that I can see will cause some confusion to unfamiliar motorists. 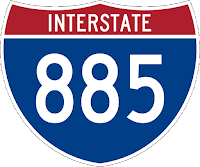 First, the number changes.  Interstate 885 is coming - yes, sometime soon we hope - and as a result, the southern half of the Durham Freeway, currently NC 147, will have a new number.  Once the East End Connector opens, that's a big if, considering that CSX and NCDOT cannot get their act together, Interstate 885 will be born.  The new Interstate starts where US 70 meets Interstate 85 in Durham, continues along East US 70, cuts across the east side of Durham on the new connector, and then south on the Durham Freeway to Interstate 40.

As a result of the new Interstate 885, NCDOT has decided to renumber Toll NC 147, or the Triangle Parkway, to Toll NC 885.  Interstate 885 will transition to TOLL NC 885 at Interstate 40 and continue southeast to TOLL NC 540 near Morrisville.

There is no change to the number of NC 540 and its offshoots (TOLL and Interstate) - they will remain the same.  However, there is a directional change that could confuse motorists.  Currently, where I-540 changes to NC 540 at Interstate 40 in Western Wake County, NC 540 continues with the West direction until TOLL NC 147, where it changes to a North/South header.

That's all going to change this Spring or by the Fall of 2023*.  At Interstate 40, where Interstate 540 West turns into NC 540, the direction will also change.  You will now be continuing on NC 540 EAST.  From this approach, this is no big deal - you are on 540 - it's now a black and white diamond vs. a red-white-blue Interstate - the West to East change will probably go unnoticed.

However, if you want to get on 540 (either version) from Interstate 40, it'll be a little confusing as your choices will only be EAST or EAST.  And if you are unfamiliar with the difference between I-540 and NC 540 - well, you're chances of making a wrong turn are going to go up.

Is it a big deal?  Probably not.  Am I writing this just for content?  Maybe.  But as the sign plans show - you're going to have 540 East and 540 East to choose from at the split on the flyover ramp from I-40 East.  If you are on I-40 West - you don't have the split ramp, but you'll have to decide which exit to use.

Why is this being done?  Maybe to prepare for NC 540's extension to I-40 in Garner? 540 will be more of an East/West Route at that time.  Of course, when 540 eventually gets around the corner and up to Knightdale, we'll have a West/West fun.

The changes aren't anything new - as this is the same part of the state that had different routes on and off the Beltline during the 1980s/90s, Inner/Outer Beltline for a time, I-540 was North/South for a bit and then went entirely East/West, NC 540 was signed as Interstate 540 and changed right before it opened, and let's not forget I-495 to I-87 along US 64 in Eastern Wake County.  Speaking of the Inner/Outer concept - why not go back to it for 540.  Yes, it didn't work for the Beltline, but it does work with I-485 in Charlotte.

*: The contract should be finished by September 2023, so hey, maybe it'll change again.