Astoria-Megler Bridge - US 101 over the Columbia River between Astoria, Oregon and Megler, Washington 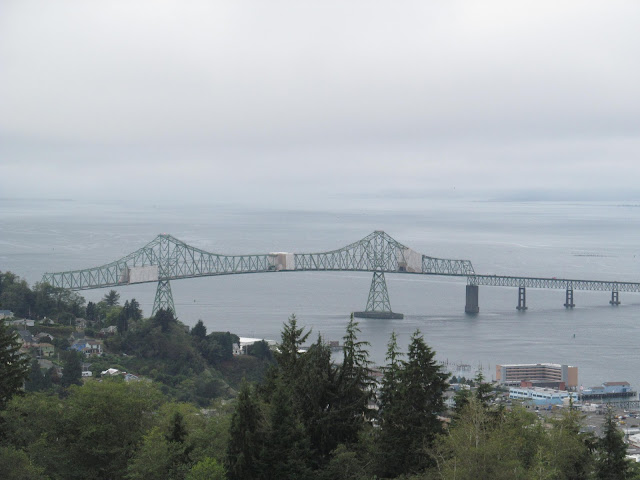 When the Astoria-Megler Bridge over the Columbia River first opened on August 27, 1966, some 30,000 people came to Astoria, Oregon to mark the occasion of the bridge's grand opening. The Astoria Megler Bridge, the longest continuous truss bridge in North America at 4.1 miles between Astoria, Oregon and Megler, Washington, came after decades of slogging through the legislative processes in both Oregon and Washington State. But the history of a "bridge to nowhere" quickly faded as tourists traveled across the bridge in droves, continuing through Astoria on their drive up US 101 (the Oregon Coast Highway). Few people would doubt the importance of the bridge today, and looking through history, it's strange to think it was ever doubted at all. The opening of the bridge marked a major milestone in regional travel, but also marked one of the Pacific Northwest's final and most triumphant victories: conquering the mighty Columbia River.
Connecting the Columbia River at Astoria was decades in the making before the Astoria-Megler Bridge opened. As a way to solve a transportation need, Astoria captain S.F. "Fritz" Elving started building ferries to take passengers and automobiles across the Columbia River to Megler in 1921. His fleet of ferries grew with the automobile boom, but it couldn't keep up with the growing traffic demands. The ferries did not run in inclement weather and the 30 minute trip each way caused huge backups as auto travel become more popular.
The idea of building a bridge in Astoria had been talked about since the 1930s, but it didn't get serious until 1953, after a summer of long waits for the Astoria ferry service. Two years later, the Port of Astoria unveiled the design for the Astoria-Megler Bridge, and with that, kicked off a campaign to find the $24 million to build it. The funds to construct the bridge were secured in the form of bonds, to be paid off on a 30 year schedule.
Public support was broad and the need appeared urgent, but by the 1960s. the fate of such a bridge was still uncertain. In 1961, it was thought that a four mile long bridge to span the mouth of the Columbia River appeared as close to construction as it was when first proposed nearly 30 years prior. Politics between the neighboring states of Oregon and Washington caused delays before construction began. Oregon legislators had approved the bridge construction in 1959, providing that Washington split the cost 50-50. Washington legislators responded with a 75-25 offer, seeing little benefit in connecting the coastline. A bridge toll would offset the cost, but Washington lawmakers were dead set against anything with a toll. But despite those oppositions, the bridge proposal soon gained approval on both sides of the Columbia River, and on November 5, 1962, construction officially began to build the bridge. Finally, in 1966, the Astoria-Megler Bridge opened to the public, charging $1.50 per car in toll.

The Astoria-Megler Bridge was built by DeLong Corporation, American Bridge Corporation and Pomeroy Gerwick. The design and engineering for the bridge was by George Stevens, Ivan D. Merchant and William A. Bugee. A cantilever truss design was chosen for the main span of the Astoria-Megler Bridge, with this span located closer to the Oregon side of the river. Towards the Washington State side of the bridge, there is a lengthy causeway that makes the longest portion of the bridge. The main span is a 2,468 foot long steel cantilever through truss, which is flanked by five steel deck trusses, 140 concrete deck girder spans at 80 feet long a piece, and at the Washington end of the bridge, seven 350 foot steel through truss spans. The bridge is designed to withstand some of the toughest attacks of nature, sometimes getting beaten by wind gusts of 150 miles per hour from the fierce Pacific storms that occasionally batter the coast that still leave the bridge with a safety factor. The concrete piers are built with an eye toward the river flood speed of nine miles per hour when whole trees sometime are swept along the Columbia by the raging water.

Built at the point where marks the point where Columbia Bar pilots and river pilots exchange control of commercial vessels, the Astoria-Megler Bridge has proven popular over the years, even if you're not on a ship. In the last five months of 1966 after the bridge opened, the bridge carried about 240,000 motor vehicles, which was the projected figure for all of 1967. By 1993, more than 1.6 million vehicles a year were crossing the bridge. Due to its popularity, on December 24, 1993, more than two years early, the bonds were paid off and the toll removed. Talk about a great Christmas present! Today, the Astoria-Megler Bridge gets about 7,300 vehicles per day on average.

The bridge has seen its fair share of events over the years. At one time, there was a kidnapping foiled by a toll collector who saw a woman mouth "Help Me" from the back of a sedan. Along the bridge, the 159 mph record was set by the fastest motorist ever caught speeding anywhere by the Oregon State Police. Starting annually in 1982, one lane on the Astoria-Megler Bridge closes for the Great Columbia Crossing 10K Run/Walk, and this event takes place during the autumn. It's the Pacific Northwest's answer to the Mackinac Bridge walk that takes place over Labor Day Weekend. Astoria, Oregon has been a popular movie location over the years, with movies like The Goonies and Kindergarten Cop being set in Astoria. But the mighty Astoria-Megler Bridge has made its own cameo on film in the movie Short Circuit, when the robot Number Five crosses the main span of the Astoria-Megler Bridge into Oregon. It's one of my favorite movies of all time, and not just because of the bridge.

I've visited the Astoria-Megler Bridge on a few occasions. I've crossed the bridge by car. I've checked out the bridge along Astoria's waterfront. I've also seen some great views of the bridge from the Astoria Column, which is a column and observatory that has artwork to tell the story of Astoria, Oregon and the Pacific Northwest as a whole. The Astoria Column is on the southern outskirts of Astoria and has a park surrounding the tower, with amazing views of the the Astoria-Megler Bridge and the surrounding countryside in the northwest corner of Clatsop County, Oregon. The Astoria Column is certainly worth visiting if you are in the area. Astoria has attracted many people over the years, from Captain Robert Gray on his ship the Columbia Redviva in 1972 and the Lewis & Clark Expedition to the common curiosity seekers of today, and many of today's curiosity seekers get to experience the area with the Astoria-Megler Bridge in view as a wonderful landmark where land meets sea. 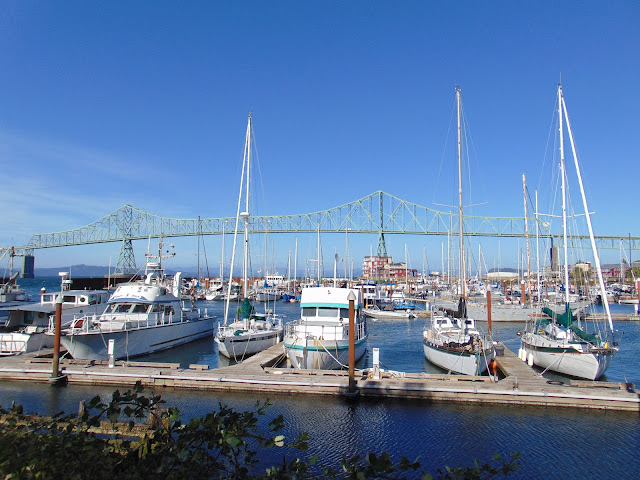