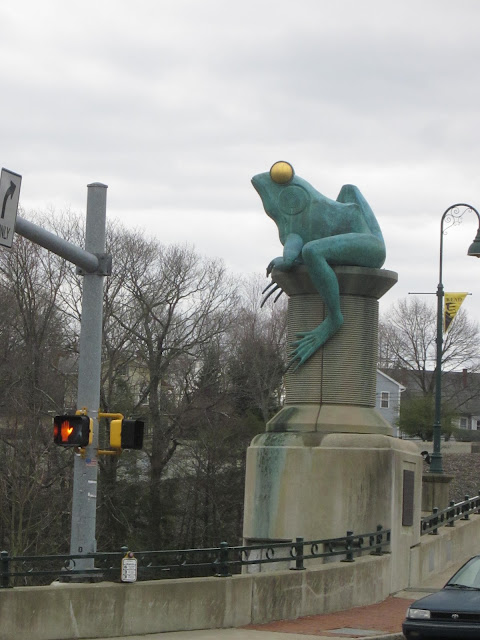 One of the more unusual sights while traveling the highways and byways of eastern Connecticut is the Frog Bridge, which spans across the Willimantic River between downtown Willimantic and neighboring Windham. Known officially as the Thread City Crossing and South Street, the Frog Bridge is 476 feet in length and connects CT 32 on the north side of the river with CT 66 on the south side of the river. The bridge was built in the year 2000 at the cost of $13 million to replace a stone arch bridge built in 1857 called the Windham Road Bridge (now a pedestrian bridge known as Garden on the Bridge) located at the Windham Mills State Heritage Park.

While the Frog Bridge is mostly a nondescript looking bridge, there are frogs sitting on tops of spools of thread on each side of the bridge. In 1986, Connecticut state legislator John Lescoe introduced a bill to fund a feasibility study for a new bridge over the Willimantic River between Willimantic and other parts of Windham. After a recession in the late 1980s, the funding for the new bridge was approved in 1991. Connecticut Department of Transportation engineers presented a design for the bridge, which residents disparaged as bland. The residents desired for something with more character for its new signature bridge, much like the famous Merritt Parkway bridges in Fairfield County, Connecticut.
After pressure from historians and residents, the state relented and added an architect to the bridge budget, which is not usually done. When plans were drawn up to build the bridge, it was decided that the bridge should one that would spark pride in the town and speak of its unique history. Since Willimantic has a long history in the textile industry and is nicknamed the Thread City, it made sense to incorporate spools of thread at each end of the bridge. The frogs symbolize a specific event in Windham's history. Sculpted by Leo Jensen of Ivoryton, Connecticut, the brass frogs are 11 feet tall and sit on top of the four huge spools, costing $50,000 each. The frogs even have names, which are Manny, Willy, Windy and Swifty. One can that the frogs are named for Mansfield, Willimantic, Windham, and for an Algonquin word meaning "land of the swift running water". In 2002, the Federal Highway Administration awarded the Frog Bridge an Honorable Mention for Excellence in Highway Design, in the category of Historic Preservation.

You may be asking yourself, what is the deal with the frogs? Willimantic is known as being home of the infamous "Battle of the Frogs" in 1754. During these early days of the French and Indian War, Windham’s Colonel Eliphalet Dyer raised a local regiment to fight in the war. Those who remained behind felt vulnerable to attack. Their worst fears seemed realized during a steamy, hot June night when unearthly screams emanated from the darkness by a shrieking, clattering thunderous roar unlike anything they had ever heard before. Thinking that it was an Indian attack, the valiant villagers brandished their muskets and fired blindly into the night. Some believed that Judgment Day had arrived and prayed. Others panicked and hid under their beds. Some cooler heads finally prevailed and went in search of the ungodly noises, but to no avail.

Only when the sun rose the next morning did things quiet down and the townspeople find the source of the horrendous cacaphony. They looked to a nearby pond a couple miles east of town, down to no more than a puddle thanks to the a longstanding drought that resulted in a dry summer, was ringed with scores of dead bullfrogs littering the landscape. Apparently, some sort of frog turf war had broken out and the carnage was excessive, to put in mildly. Every frog for miles around had descended on the Windham area in a desperate search for water. The jostling and battling of these frogs, and their struggle to gain access to the pond's only remaining water had been the source of the previous night's unearthly din. To commemorate the Great Windham Frog Fight of 1754, that pond has been renamed as Frog Pond.

In the years since, the event has been commemorated by tales, songs, and decorative traditions, including a frog being included on the seal of the Town of Windham. At least three ballads were written about the Great Windham Frog Fight, while an 1888 operetta, The Frogs of Old Windham, drew audiences throughout Connecticut. After the American Revolution, the Windham Bank issued banknotes with an image of a frog standing over the body of another frog. In more recent years, frogs of the Frog Bridge were featured in Bill Griffith's Zippy the Pinhead comic and of course, in the sculptures of the giant green frogs that sit at both ends of the bridge.