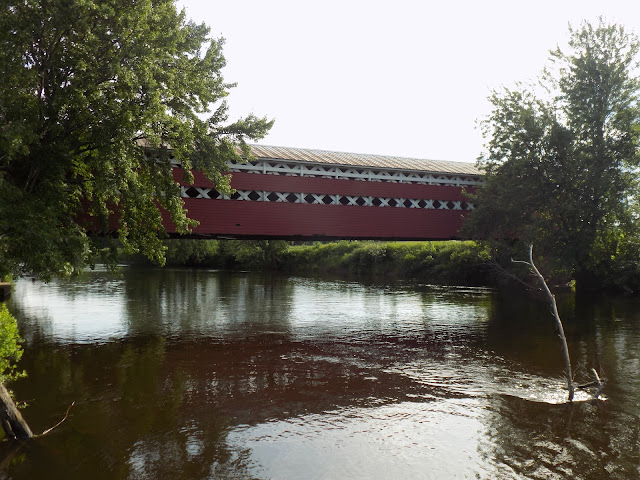 South of Mont-Tremblant, Quebec between QC Routes 323 and 327 in the town of Brébeuf in the Laurentides region of Quebec is the Prud'homme Covered Bridge (or Pont Prud'homme, in French), and the bridge crosses the Devils River (or Rivière du Diable, in French). Built by Bernardin Durocher in 1918 using a Town truss design that is common for covered bridges in Quebec, the Prud'homme Covered Bridge is 145 feet long and was built at a cost of $6,000. As you can see, there are openings in the lattice work of the paneling, which was designed to help to bring light inside the bridge. These openings also helped avoid horses becoming fearful of their surroundings as they across down the bridge.

The Prud'homme Covered Bridge was first called the Bridge of the Armistice as construction was completed and the bridge opened on November 11, 1918, the same day that World War I ended. The bridge was later named the David Bridge until 1957. At that time, it was renamed in honor of the local Prud'homme family during a mandate called by Maurice Duplessis of the Union Nationale, a Quebec political party.

For a number of years, Alphonse Prud'homme voluntarily spread snow on the covered bridge to allow the passage of sleds and snowmobiles as they passed across the bridge, as a testament to Quebec's wintertime recreational traditions. At one time, the Prud'homme Covered Bridge was painted green and white, but when the bridge was repaired in 1997, it was repainted red as part of the repair costs of $40,000. Further restoration work to the covered bridge is planned in two phases in 2022 and 2023, following a closure to the bridge following a bridge inspection by the MTQ (Ministry of Transportation Quebec) in April 2019. The first phase of bridge reconstruction is planned for  the winter of 2022 with the stabilization of the bridge. The second phase is planned for 2023 and will be devoted to restoration work along the covered bridge. The MTQ has made restoration of the covered bridge a priority, as it will reestablish the link between the two sides of the Devils River while preserving the elements that distinguish this covered bridge.

I visited the bridge in the summer of 2019, not knowing ahead of time that the covered bridge was closed to traffic. Following signs from the main road, I was able to find the bridge and find a place to park. It's easy to view the bridge from different angles, and area around the covered bridge is a popular launching point for canoes and kayaks. With the bridge being worked on for future reopening, I would imagine there being interpretive signs installed to promote the history and heritage of this bridge and the surrounding agricultural countryside.