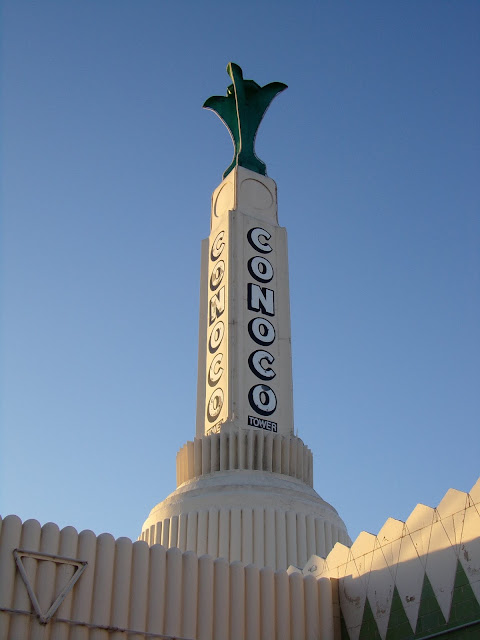 Take a drive down old US Route 66 and you will find an abundance of roadside architecture, stemming from its days as a major highway between Chicago and Santa Monica, California. It was during Route 66's heyday that art deco architecture was quite popular. Enter the small town of Shamrock, Texas, which you will find is the home to the Tower Station and U-Drop Inn, located at the northeast corner of Business Loop I-40 (historic US 66) and US 83.

Just 15 miles west of the Texas-Oklahoma border, the Tower Station was designed by architect J.C Berry and built in 1936 by J.M. Tindall at the cost of $23,000. A beacon for the weary traveler, the Tower Station was the first commercial business located on the historic US Route 66 within Shamrock, and is one of the most imposing and architecturally creative buildings along the length of the road.

The unique design of this building came to be when the design was drawn with a nail in the ground. The building was actually designed and constructed to be three separate structures. The first and most notable structure is the Tower Conoco Station, with its four-sided obelisk rising from the flat roof and topped with a distinctive finial. The second structure is the U-Drop Inn café, which got its name from a local school boy's winning entry in a naming contest. The third structure was intended to be a retail store, but instead became an overflow seating area for the café. Once the Mother Road had been bypassed by Interstate 40, the building served as a bus station for a time, then sat abandoned until it was restored through grants and fundraising. Now, the building serves as a visitor center for Shamrock.

Up until around the late 1970s, the Tower Station and U-Drop Inn were sided with light brick and green tiles. Now renovated with light pink concrete highlighted by green paint, it still looks similar to what it looked like during historic US Route 66's heyday. The towering spire above the service station spells out Conoco, an ode to the history of this building.

Fans of the movie Cars may find the Tower Station to look a bit familiar. That is because the sights and scenes of the fictional town of Radiator Springs in the movie are based on various landmarks of the historic US Route 66. In particular, Ramone's body art shop is exactly inspired by the Tower Station and the U-Drop Inn in Shamrock.