Throwback Thursday; US 191 The Coronado Trail (AKA US 666 the Devil's Highway)

By Challenger Tom November 23, 2017
This Thanksgiving for throwback Thursday I'll be looking at US 191 in the White Mountains of far eastern which is part of a 123 mile National Scenic Byway known as the Coronado Trail. 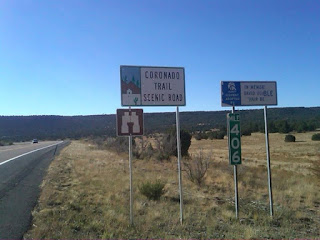 The Coronado Trail roughly follows the path the 1540-1542 Coronado expedition took in search of the Cities of Gold.  The White Mountains of eastern Arizona essentially are an extension of the larger Mogollon Rim region and has peaks as high as 11,420.  The Coronado Trail peaks out a little over 9,200 feet (if I recall correctly) before dropping down to Morenci at about 4,700 feet.

In 1938 the Coronado Trail became part of the southern extension of US 666.  The Coronado Trail at this point came to be known as the Devil's Highway because of the numeric connotation associated with the number of "The Beast."  By 1992 ADOT had successfully petitioned to have US 191 extended via the Coronado Trail to Douglas while US 666 was truncated back to Gallup in New Mexico.  By 2003 the remaining section of US 666 was replaced by US 491 and thus the sixth spur route of US 66 was gone.  USends covers the history of end points of US 666 in full detail.

Supposedly the primary reasons for getting rid of US 666 was due to signage theft.  Reportedly ADOT also cited the fact that US 66 was gone for about a decade as a reason to change the route number on the Coronado Trail to US 191.  A lot of Arizonans in the know even to this day still call the Coronado Trail either US 666 or The Devil's Highway, really the road is fitting of the moniker.

Copper Era on the Coronado Trail

Given the traffic volume is so low on the Coronado Trail at less than 100 cars a day it is easy to see why ADOT is interested in attempting to relinquish/close the route given the maintenance costs.  The most realistic proposal to realign US 191 is via US 180 into New Mexico and back into Arizona via NM/AZ 78.  Personally I'm a huge fan of the Coronado Trail and count it among my favorite highways in the country much less a segment of US Route.  From a financial standpoint it makes sense to close the route, however ADOT almost nothing to promote it for tourism which I see as a missed opportunity.  With that said really the whole point of this particular Throwback topic, getting awareness out there that the Coronado Trail really is one of the best driving/scenic roads in the country.

But what about the route?  Progressing from the cover picture south of Springerville and Eagar the route of the Coronado Trail carries US 191 along with US 180 along some flat terrain on the Colorado Plateau.  US 180 splits off the Coronado Trail in Alpine eastward into New Mexico while US 191 continues southward.  Alpine incidentally at 8,050 feet above sea level is apparently the highest place in the United States where farming has been successfully done. 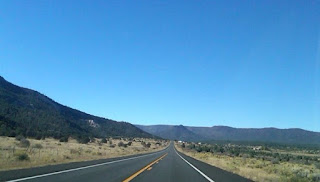 Heading south on the Coronado Trail you get a really apparent and stern warning that you essentially are on your own in the White Mountains. 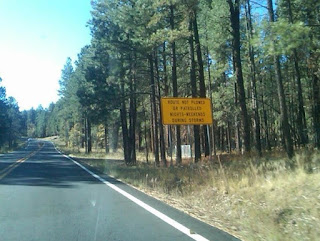 I took these photos in October of 2012 which was a little over a year after the Wallow Fire which had burned 538,049 acres in 2011.  Damage from the Wallow Fire was very apparent along the Coronado Trail between Alpine and Hannagan Meadow. 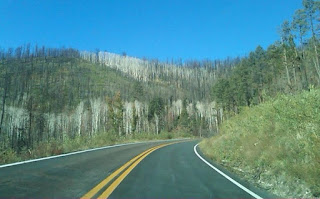 Hannagan Meadow has been an inhabited place since the 1870s.  Really there isn't much to it other than a Forest Service station and a general store.  You get another warning about what you're getting into in Hannagan Meadows on a giant caution sign assembly. 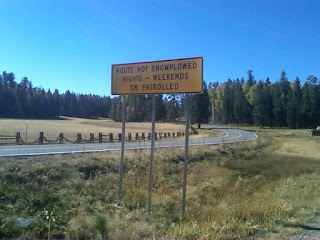 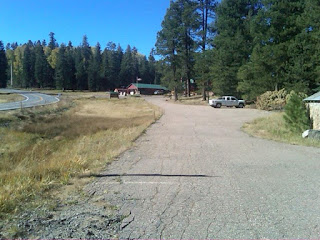 There was more burn areas from the Wallow Fire south of Hannagan Meadow before the high roadside overlook southbound from about 9,100-9,200 feet. 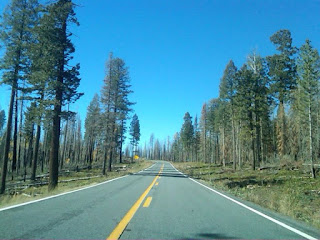 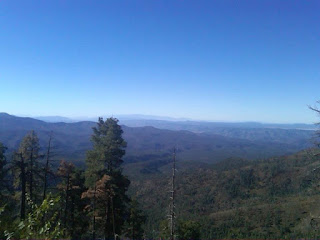 The vast majority of the 600 curves of the Coronado Trail are south of Hannagan Meadow.  There is a point where the really big curves begin where long trucks are instructed to turnaround. 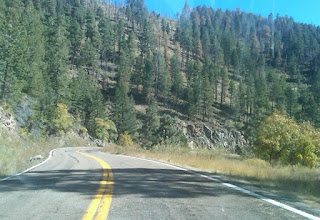 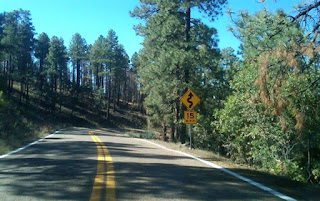 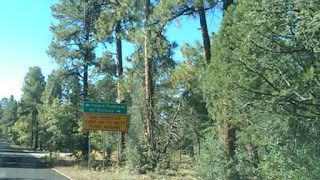 Speeds limits can be as low as 15 MPH along the Coronado Trail.  Really a halfway decent driver ought to be able to handle at least 25-30 MPH in the really sharp stuff, ADOT gets a little crazy posting low speed limits on mountain grades. 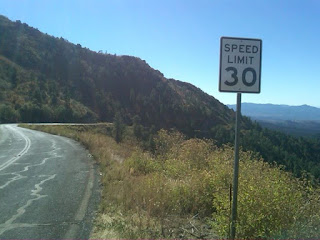 Not a bad view from the 30 MPH speed limit sign. 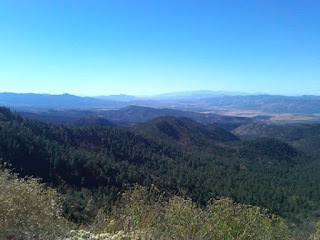 It really is amazing how many curves a paved road like the Coronado Trail can have, they feel like they go on forever.  I was luckily in a car that had really good handling otherwise I would have been worn out from sawing at the wheel. 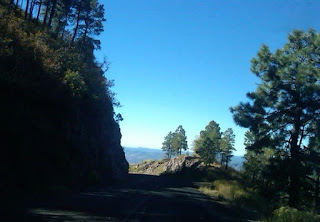 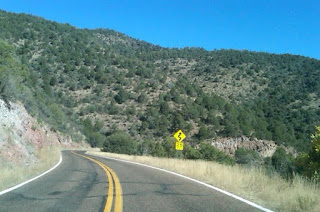 There is nothing but amazing views of the mountains only a couple feet away along the cliff-face heading southbound. 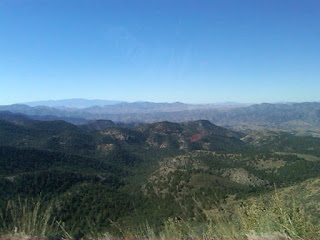 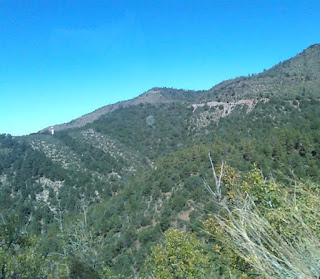 Approaching the Morenci Mine the switchbacks get tighter as the Coronado Trail loses elevation. 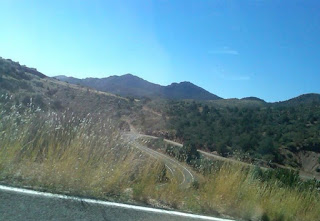 The Chase Creek overlook is spectacular. 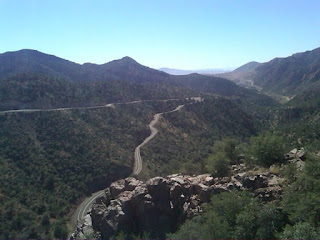 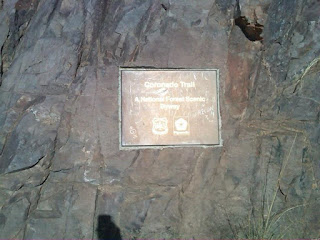 Chase Creek has a huge drop on the descent to the Moreni Mine. 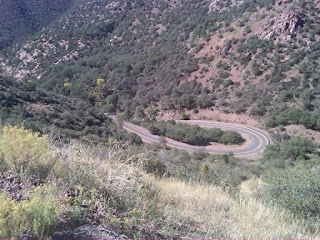 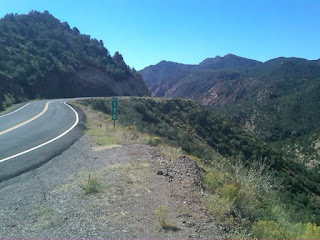 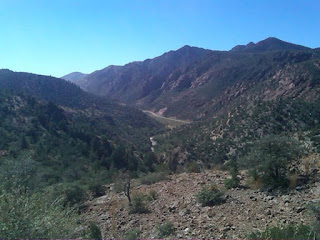 US 191 and the Coronado Trail traverse directly through the open pit Morenci Mine.  The Morenci Mine is one of the largest open pit Copper Mines in the world and essentially is the only reason why Greenlee County was split from Graham County in 1909.  The Morenci Mine is next to the towns of Morenci and Clifton which house the mine workers.  Greenlee County is the lowest populated Arizona County at about 8,000 residents.  According to family lore the town of Morenci was named after Morenci, Michigan. 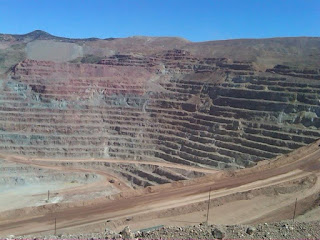 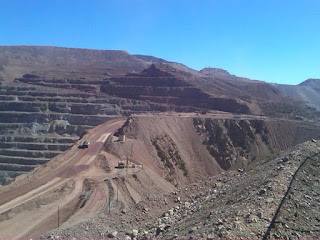 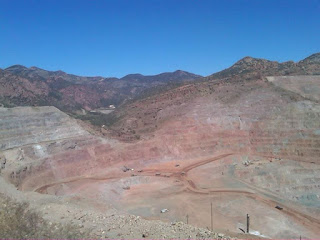 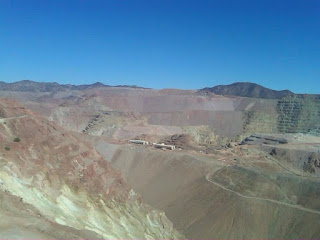 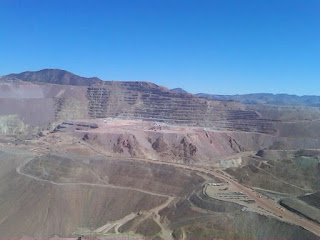 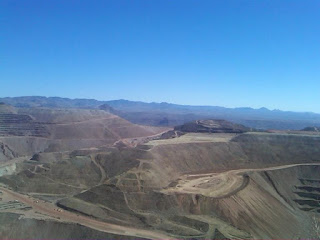 The Morenci Mine was one of the cited reasons ADOT has proposed closing the Coronado Trail.  The Mine literally surrounds US 191 and it is fenced off on both sides to prevent passerbys from accessing it.  After passing under mine machinery and this tunnel US 191 enters Morenci where the Coronado Trail ends. 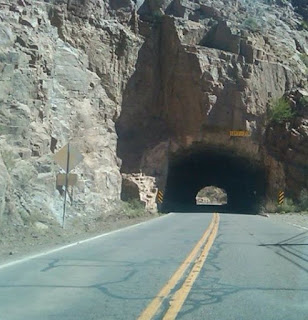 Really if you are heading to eastern Arizona or through it for any reason I highly recommend US 191.  If you like driving mountain roads in any capacity the Coronado Trail is an absolute delight.  It took me about 2.5 hours the last time I drove through the entire Coronado Trail, I would speculate for most it would be a good 3.5-4 hours of time invested.  Hopefully ADOT doesn't close the Coronado Trail but I'd say at this point the prospects aren't looking promising.