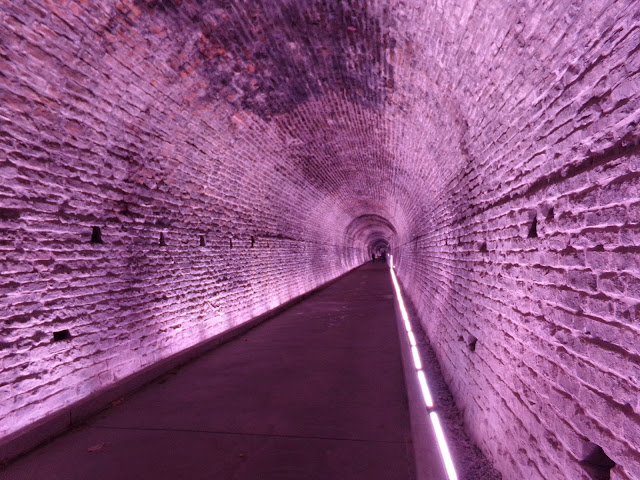 Recently, I had found out about a neat tunnel called the Brockville Railway Tunnel that was used for trains in Brockville, Ontario, located in the Thousand Islands region of the province. By chance, I decided to visit the tunnel on my way to Ottawa this past weekend.

An engineering marvel at 1730 feet in length, the Brockville Railway Tunnel happens to be the first railroad tunnel constructed in present-day Canada. The tunnel was built between 1854 and 1860 for the Brockville and Ottawa Railway to connect the Brockville waterfront on the nearby St. Lawrence River with the Ottawa River near Arnprior, Ontario to the north. Part of the tunnel is lined with brick, whereas natural stone forms the walls of the tunnel around its center portion. It should be noted that the plans to construct the tunnel was not without some public disagreement, as a number of people felt that it would be easier and more cost effective to build the rail line along the riverfront instead of building the tunnel under downtown Brockville. Supporters of building the tunnel prevailed, and as a result, trains traveled through the tunnel between 1860 and 1970.

The City of Brockville now owns the tunnel and it is used for recreational and tourism purposes. Recent renovations that took place in 2016 and 2017 (to coincide the Canada's 150th anniversary celebrations) to allow people to traverse the tunnel from end to end, as well as connect downtown Brockville and the city's waterfront with the Brock Trail system. With the renovations, there is a synchronized light and music show running every day of the year that you can enjoy if you are visiting the tunnel.


Here are also a few YouTube videos to check out about the history and modern day renovation of the Brockville Railway Tunnel.